Sources claiming to have access to development materials for Nintendo's upcoming Switch convertible console have claimed that the device will drop the performance of its graphics processor by 60 percent when used outside its docking station.

Long-rumoured and previously known as the NX, Nintendo's Switch was formally unveiled back in October with very few details of its precise internal workings. Although Nintendo confirmed that the device was based around a tablet form-factor with an Nvidia Tegra system-on-chip (SoC) at its heart, it has so far kept full specifications out of its promotional material - but not, it appears, documentation sent to developers working on bringing their games to the device, with the predictable result that details have leaked regardless.

According to allegedly verified sources speaking to Eurogamer, the Switch will offer a dramatically different performance profile depending on whether it's being used in hand-held or docked modes. In its dock, the Maxwell-based Tegra SoC will run its graphics hardware at 768MHz; when undocked and running on battery, this will be locked to 307.2MHz, or just 40 percent of its docked speed. Additionally, developers will have the option of using the same lower speed while docked, but the opposite is not possible: The higher-performance mode is completely locked off unless docked.

Although the dock itself contains no additional processing hardware and the general-purpose processor performance is unchanged between docked and hand-held modes, it's clear the Switch will offer considerably more grunt while docked. What is less clear is how developers aim to use this: a game made with a graphical fidelity that runs well at 768MHz will naturally not run nearly as smoothly at 40 percent of that speed, so it seems unlikely developers would use the extra performance while docked to improve the number of on-screen objects or use higher-resolution textures. Instead, it seems that Switch games will offer variable rendering resolutions: Running on the 6.2in touchscreen in hand-held mode, games will run at its native 720p resolution; when docked, developers may allow their titles to render at 1080p instead for a better big-screen experience.

Nintendo, naturally, has not commented on the alleged specification leak. The Switch is due to launch internationally in March 2017. 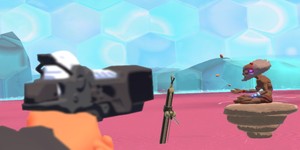 The boss rush game comes to Nintendo's Switch. Is it any good?