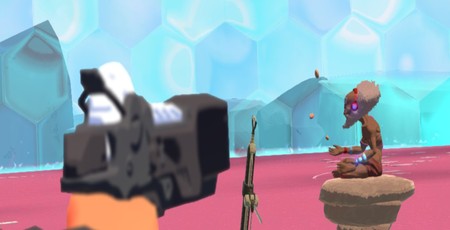 Furi is an apt name for The Game Bakers' action game, recently re-released on the Switch.

Furi is a boss rush game that sees players fight through a series of 1v1 face-offs with a limited skillset, trying to learn their rhythms and routines. The game is an exercise of style over substance, but it's hard to feel aggrieved when the game's sense of style is so well defined.

The bosses you'll fight are designed by Afro Samurai creator Takashi Okazaki, and the game is wearing its Japanese inspirations on its sleeve, with each fight a whirling mess of swirling blades, curves of energy and yelled threats as you square off against a selection of unique guardians, with a lot of the game's challenge coming not from delivering the beatdown to the bosses, but working out their phases and dancing between the enemy's attempts to attack you. That is, pretty much the entire game neatly summed up in a paragraph. There are no upgrades, no items, no power-ups of any description. If this popped up in a certain spacefaring horror movie, a manic android would quickly show up to say how much they admire its purity. Furi teaches you all of its controls and every weapon in your arsenal within the first boss fight, and then it steps back and lets you experiment with it. Your strikes, twin-stick shooting and parries are all present and correct from the second you hit a button.

The game feels more like a fighting game than similar boss rush titles like Titan Souls or Shadow of the Colossus, with you predicting the enemy movements and taking steps to punish the enemy for giving you a chance. Both you and the Guardian bosses you'll fight have multiple lives, bars that refill to either donate the players lives or the different phases of the boss you're fighting. When a bar is emptied, the opponents will refill, either restarting the phase of the current boss if the player dies or recharging him to full. the opponent will refill theirs, with the fight ending when one of you runs out of lives. While mechanically this all seems simple, the fights all have a distinct flavour. Some fights will involve lightning-fast parries and brutal beatdowns, while others involve you keeping your distance and trying to step through nigh-impossible gaps in the floating death barrelling through the arena. Fights take place in darkened platforms, well-lit fields, and labyrinthian arenas full of walls, laser beams and your enemy, relentlessly chasing you down.

A stand-out fight is the third boss, The Line, an old man with the power to bend time. He's locked inside three separate shields. Shooting the shields weakens them, eventually carving a hole, but there's a catch: every round that you fire that damages the shield then bounces around trying to damage you. So, if you try to burn down the entire shield with sustained fire you'll be in the middle of an apocalypse of your own making. The smart option is to fire charged shots, targeting a specific part of the shield with accurate shots, meaning you can hit the boss as soon as possible without filling the screen with projectiles for you to dodge. Furi's tone and story hit the right notes for me, with the main character trying to escape the prison he's trapped in and reach a free earth below, each fight bookended with a long exposition-laden walk between yourself and a mysterious companion before you're tossed into the next battle. These walks are unskippable, but you can automate your walking and take it as a cutscene, which I found preferable.

This is all helped by a phenomenal soundtrack, which keeps the energy high for each fight tension ratcheting the throbbing background music urges you to kill, kill, kill.

Combat has a pace that I found satisfying but it lacks any real heft. Hitting someone with a fully charged attack feels like it should deliver a solid thump, but instead combat feels slightly floaty. Parries are satisfying, but the warm feelings it gives you are quickly taken away when the enemy follows up with another attack and flattens you. However these moments are few and far between, and most of my experience with Furi was middling. Furi is a game that does most things right, but for some reason the parts don't quite come together as part of a solid whole. I enjoyed the game and enjoyed the time I spent with it, but there are so many sparks of brilliance here it's a bitter disappointment that it occasionally manages to fall completely flat.

So, Furi by name, Fury by nature. The game is a rewarding and fun boss rush game that too often crosses the line to frustrating, but if the game clicks with you, you'll struggle to put it down.