There are more immediately obvious flaws. Mostly little things, but irksome nonetheless. A particular bugbear of mine is that bounties on pirates are only paid if you land the killing shot on a ship, and the AI Security Services have an annoying tendency to snipe ships you've completely dominated at the very last moment. Of course, you can always let them do all the work and then try to steal the kill yourself, but both ways seem decidedly unfair. Another irritating niggle is that any cargo salvaged from a wreck is marked as "stolen", meaning any security vessels that scan your ship will issue a heavy fine. This makes sense when the wreckage is of some poor trader you've just destroyed. But when it's some long-forgotten hulk you've stumbled upon that's sporting a cache of valuable ancient artefacts, it seems silly to to classify them as stolen. It feels like you're being punished for your curiosity.

There's one last issue we should address, which is the lack of an "offline" mode for Elite Dangerous, the one Kickstarter promise that Frontier failed to keep. This has caused something of a stir amongst backers and other players. It's certainly disappointing, and I think that Frontier's reason behind the omission - that it would affect their ability to deliver future story events - is pretty weak. But does the lack of an offline mode make Elite Dangerous a worse game? No. The game can still be played alone if you want, or with a small group of friends, while the launch seems to have been smooth overall, with no serious server issues apparent. So while it may be poor customer service on Frontier's part, it doesn't impact on Elite Dangerous as a creative work. Taking all of the above into account, Elite Dangerous is a darned enjoyable space simulator. But for me, here's what makes it truly special. All ships are equipped with a basic discovery scanner, which enables players to scan for astronomical bodies in the galaxy's many uncharted systems. This data can then be sold for credits, the amount of which varies depending on what you've discovered and the detail with which you scanned it.

Pragmatically exploration isn't all that exciting, you point your ship at a planet and let it do the work. But it's how that incentivises you to just see what's out there that skyrockets Elite into the gaming stratosphere. There are stars of a dozen different hues, from dimly glowing brown dwarfs inconceivably huge red hypergiants like Betelgeuse. There are endless variations of planets, bright yellow desert spheres that evoke memories of Dune's Arrakis, ringed gas giants orbited by half a dozen moons, beautiful earth-like worlds that conjure dreams of what life might exist beyond our own solar system. Heck, even the dullest lump of space-ice proves to be fascinating map of cracks and craters when viewed up close. Then there are phenomena that I haven't seen yet, but am dying to visit. Black holes, neutron stars, nebulas, many of which are real phenomena that exist in our own night sky. And goodness knows what lies beyond those 160,000 factual star systems, in the procedurally generated expanse of Frontier's Milky Way. I've often complained about open-world games that give you no incentive to explore or experiment with the wonderful environments that designers and artists have spent years creating. Elite Dangerous is one of the only games, aside from the work of Bethesda, that I want to explore for its own sake. Somehow it has resonated with the part of my soul that once wanted to be a mountaineer, an explorer, an astronaut, the child that didn't need a reason to look beyond the horizon. A thousand kill-stealing space police couldn't take that feeling away.

Elite Dangerous is stunning. At the absolute least it's the best-feeling game I've play this year, one which is engaging in almost every moment. But to me it's far more than that. It's made me think about space in completely new ways. I ended up writing this review late into the night because I spent most of my working day Googling interesting places to visit in the galaxy. I've learned facts I never knew before, like what the largest star in our galaxy is (V.Y. Canis Majoris), and the location of our nearest neutron star (approx 630 light years from Sol). Elite Dangerous is a game that has genuinely expanded my horizons, and I can't think of any stronger way to recommend it than that. Should you need me, I'll be somewhere beyond the sun. 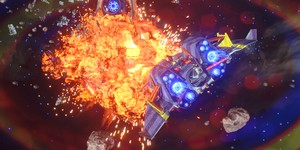 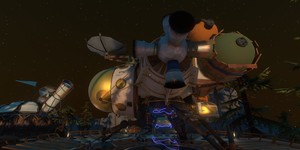