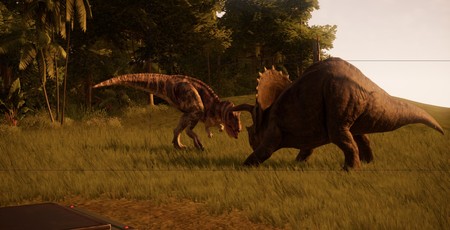 If Jurassic World Evolution has taught me one thing, it’s that dinosaurs are entitled gits. You’d think bringing a creature back from the dead after 65 million years would earn you a little gratitude, not to mention giving it a place to live and an endless supply of free food. But man, these terrible lizards are fussy. I’ve got an antisocial Ankylosaurus who goes all wrecking ball if she’s in an enclosure with more than a couple of other dinos. My Diplodocus isn’t happy unless she’s got a small continent available to wander around. My Cetarosaur fights anything that comes within fifteen feet of her, like a scaly Tyson Fury. And the Velociraptors, well, the Velociraptors are just dicks.

It’s like looking after a gigantic, preposterously expensive toddler creche, only the toddlers are 10 feet tall and eat their parents if they escape their cots at night. Worse, every time a dino breaks loose, the guests moan at me because a few of them get a little bit eaten. By moan I mean “file a series of cripplingly expensive lawsuits that effectively grinds all progress in the park to a halt”. After the laid-back, somewhat lightweight thrills of Planet Coaster, Frontier’s enfranchised follow-up is a far fiercer and less compromising beast, offering a management simulation to sink your teeth into and a far more structured and satisfying progression system. Unfortunately, Evolution’s greater substance comes at a cost, largely paid in creativity but also a little bit in fun.

Evolution puts players in charge of several prehistoric theme parks across five tropical islands, known in Spanish as the Five Deaths for those who like their foreshadowing as subtle as a Triceratops standing on your face. Starting out with just one park, your ultimate goal is to get a five-star rating across all five of your attractions.

To achieve this, you’re going to need dinosaurs, lots of them. As in the films, dinosaurs are created using DNA extracted from fossils, which you gather by dispatching expeditions across the world. Each expedition brings back a semi-random assortment of fossils which you can process in your fossil centre to complete the gene sequence. When a sequence reaches 50 percent completion, you can attempt to incubate a dinosaur embryo, with more complete genomes resulting in a higher likelihood of incubation success. Initially, you only have one genome to incubate, the famous Australian dinosaur Struthiomimas. But it won’t be long before you accrue a few more impressive specimens like Triceratops and the predatory Cetarosaurus. As you open up more parks, you’ll get access to dig sites for the big hitters – Velociraptor, Brachiosaurus, and of course, the mighty Tyrannobastard herself.

The genetic engineering side of Jurassic World Evolution is pleasantly balanced. The more famous dinosaurs are very expensive to create, and you really don’t want to blow half a million dollars on a failed Velociraptor incubation. So ideally, you want to complete the gene sequence as best you can before trying to create one. On the other hand, those expeditions to collect fossils aren’t cheap either, and those big names bring in big crowds. Hence there’s a pleasing risk/reward balance to deciding which dinosaurs to create and when. Of course, creating dinosaurs isn’t even half the battle. You also need to house them and feed them, while ensuring that your visitors get a good spectacle when they visit your park. Initially this is straightforward enough  – keep your herbivores and your carnivores separated, and make sure they’ve got readily available food. Once you reach the second island, however, the situation rapidly becomes much more complicated.

Each dinosaur has different needs that must be met for it to feel comfortable. Some require lots of grassland to roam around in, while others prefer a heavily forested environment (all of which is easy to create using the game’s wonderful terrain editing tools). Some are pack animals, while others prefer to be alone.

Hence, with each dinosaur you introduce, the more complicated the puzzle becomes, and the more likely it is to fall apart. Compounding this issue is a host of other factors like managing finances, maintaining guest happiness, and randomised events like storms and dino diseases, any of which could throw an otherwise well-oiled park into disarray. The Velociraptors provide a good example of Evolution’s ever-shifting challenge. Velociraptors hate being alone, and a solo velociraptor will immediately start throwing itself at the fences in a desperate attempt to escape. So the sensible thing to do is give her a couple of buddies to keep her company. But this means you’ve got three Velociraptors in your park, which is fine until a storm knocks out your electric fences in classic Jurassic Park style, and the raptors get out.

Evolution clearly understands the fundamental conflict at the heart of Jurassic Park, finding space for both that childish wonder of seeing dinosaurs returned to life, and the troubling ethics of bringing back a dangerous species purely for the sake of entertainment. It doesn’t always communicate this effectively, however. The writing and narrative that accompanies your building is definitely more Jurassic World than Jurassic Park, a tonal mishmash of overwrought philosophising and outright silliness that even the voices of Bryce Dallas Howard and Jeff Goldblum can’t rescue. One of the strangest parts of the game is the objective system, which combines a handful of set missions with a potentially limitless body of “randomised” contracts, both of which are handy for earning money and increasing your park’s star-rating. Both missions and contracts are ostensibly divided between three areas of importance to the park; Science, Entertainment, and Security. But there seems to be little significance to this divide when doling out objectives. One Security mission involved deliberately letting a Cetarosaurus out of its pen while there were people milling around the park, which seems like the complete antithesis of security (although some might argue it provides fantastic entertainment). The premise is that you’re testing your security response time. But you don’t test a burglar alarm by asking a thief to come and rob your house for you. It’s just nuts.

The Contract system issues don’t end there either. For some daft reason, if you turn down a contract, the game forces you to wait several minutes before offering you a new one. This quickly becomes infuriating, because the game tends to offer contracts for which you’re not remotely prepared to fulfil, so you’re constantly turning them down.

There are other issues too, some of which admittedly come down to personal taste. If you were really into Planet Coaster’s creative tools, you’ll probably find Evolution highly restrictive. The islands are smaller and less open than Coaster's huge tracts of land, and if you’re planning to build a big old loop-de-loop with a T Rex sat in the middle, well, you might have to settle for a monorail. Oh, and as I mentioned at the start of the review, the game can be brutally difficult at times. Early in my second game, I had an outbreak of Bracken Poisoning basically kill all of my dinosaurs save one, and the resulting financial damage took two hours to restore. Personally, I don’t mind the more rigid structure, and I mostly don’t mind the challenge. What does bother me is how fiddly Evolution can be to play. Part of the reason the game is so challenging is because so much has to be micromanaged. Everything from feeding dinosaurs to medicating them needs a ranger manually dispatched to deal with, and there’s no way to set it up so that they do this automatically. And when you’re managing a larger park, there’s so much going on that it’s easy to overlook something, and any one of those little issues could be the domino that sends the whole park toppling.

After criticism that Planet Coaster was too mechanically lightweight, I can understand Frontier wanting to ensure the player had plenty to do. But part of the joy of management games is setting up those efficient production lines that run themselves, and Jurassic World doesn’t let you do this. Instead it leans too far in the other direction, burying you in dozens of tiny problems and fiddly tasks that distract from the actual management of the park. As such, I can’t quite bring myself to recommend Evolution. The dinosaurs are great, and the management simulation is much improved over Planet Coaster, but there’s only so many times you can repair the same stretch of fence before you start wishing for another asteroid. Claims no plans to shut down servers.

Shift will come in around six months.