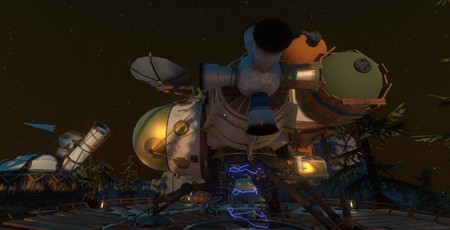 One of the main problems faced by space simulators is that, ultimately, space is incredibly boring. Yes, there are stars, planets, black-holes, pulsars, asteroids, comets, nebulae, and all kinds of other things out there. But all of these massive objects amount to about one percent of the total matter in the universe. Everything else is just black, empty void, stretching for countless light-years at any one time. Each space game approaches this problem in a different way. Elite Dangerous uses the detail in its ships to keep you occupied on yet another long-haul cargo delivery. No Man’s Sky takes its inspiration from pulp science fiction rather than our actual universe, delivering a deliberately gaudy galaxy to explore. But in my opinion, Outer Wilds has the best solution yet, instead asking, 'What would happen if we took all the weird stuff in space, and crammed it into a single solar system?'

The answer is you get a truly fascinating game, an experiment in how much awe you can inspire in a person in the shortest amount of time. In truth, Outer Wilds isn’t really a space simulator. It’s more like a first-person adventure game that gives a polite nod to orbital mechanics. You play as the newest recruit to Outer Wilds’ Ventures, a bold spacefaring organisation from the planet Timber Hearth. Your goal is straightforward: Get out there and explore! But there’s a catch: You’ve only got about 20 minutes to investigate your star system before the sun that warms Timber Hearth goes supernova, destroying everything in the entire system.

Everything, that is, except for you. When the sun explodes, washing its white-hot death-rattle over your body, time suddenly rewinds back to the moment you first woke up. From there, you’ve got another 20 minutes to continue your explorations before the sun explodes again. It's a highly unusual structure, but it works superbly. The entire game is built around this 20-minute loop. The star-system is condensed in such a way that you can get a remarkable amount out of its seemingly tiny time-slice. Getting into your space craft takes all of 10 seconds. Getting off your planet all of 20. Travelling to even the most distant planet in your systems takes no longer than a minute, at which point you can suit-up, drop down through your ship’s exit hatch, and get exploring.

And what planets! There are about nine celestial bodies in Outer Wilds, of which five are planets. But just one of these locations in Outer Wilds contains more incredible sights and experiences than most space games do in their entire simulated solar systems. I don’t want to spoil these for you, so I’m only going to talk about one of them. Nonetheless, if you want to go in completely blind, you might want to skip the next three paragraphs. The planet I want to talk about is called Brittle Hollow. It’s the nearest planet to Timber Hearth and probably the first planet you’ll explore after launch. Like Earth’s own sister-planet Venus, from space Brittle Hollow doesn’t look like much, a dull-purple rock with somewhat craggy terrain and icecaps at the poles. Its most distinctive feature seems to be its lava-spewing Moon, known as Hollow’s Lantern.

Once you land on the surface, however, the significance of the planet’s name quickly becomes apparent. As the Lantern spits globules of lava into space, they’re caught by the planet’s gravity and come crashing down onto the surface. After a few minutes of this orbital barrage, huge chunks of the planet begin to crumble away, revealing that its interior is, yep, hollow, like a giant egg with the yolk drained out. What’s more, the underside of the planet’s crust is riddled with ancient ruins from a long-lost civilisation, while treacherous, gravity-defying trailheads link these dilapidated settlements. To cap it all off, the planet’s centre is a pulsating black hole that absorbs anything that falls into it, including you if you’re careless. I’ve spent hours upon hours exploring Brittle Hollow, and during those travels I’ve died countless times. I’ve been splattered by lava, crushed by a falling piece of planet, or tumbled into the black hole and…well, I won’t say what happens if you do that.

And this is just one of the places Outer Wilds lets you explore. Every object in the game’s star systems has its own unique sights to see, hazards to avoid, ruins to explore. Outer Wilds does weird space stuff better than any other space game I’ve played. Every place you visit has some incredible, unique feature that will either bend or blow your mind. Entire planets can change dramatically over the course of those 20 minutes, often revealing things that are otherwise inaccessible earlier or later in the time-loop. Indeed, majestic as Outer Wild’s star system is, space tourism isn’t the core object of the game. That’s just something that happens along the way. At the centre of the game is this mystery of why the sun is exploding, and what it has to do with the ancient civilisation that has spread its remnants across the entire solar system.

As you explore the game’s strange and beautiful planets, you’ll uncover threads of this wonderfully interconnected story. You have several tools to help you with this. A universal translator, which deciphers the looping scrawls the Nomai left behind in almost every structure they built. You also have a signal tracker, and a scout drone that you can launch across chasms and into narrow tunnels, which can take photographs of hazards and phenomena you’re otherwise unable to see. Each new item of interest you uncover is recorded in your ship’s log, which gradually expands into a spider-web of half-solved enigmas, highlighting what you’ve uncovered, where you need to go next, and what you’ve still left to do at places you’ve already visited. Being at the right place at the right time is a recurring theme, as the planet’s changing topographies open up new pathways or previously inaccessible locations, sometimes for just a few minutes at a time. You might only resolve one or two of these before you hear the ominous noise of the sun collapsing in on itself. But one colossal explosion later, and you’re back in your ship, course set to a new heading, on the trail of some other breathtaking discovery.

Outer Wilds isn’t a perfect game. Your spaceship’s controls take some getting used to, especially if you’re playing on keyboard and mouse (the game strongly recommends playing with a pad, incidentally). Also, the time-loop structure means there are inevitably moments when you’re on the cusp of completing an area when the sun goes boom, which can be frustrating. I’m also not the biggest fan of its visual style. Outer Wilds can look beautiful, especially when the sun is backlighting the system’s planetary spirals. But I find some of the chunky, play-dough-like texturing unsightly, particularly on characters. Lastly, a few of the game’s puzzles are also plain irritating; getting to the South Pole of Brittle Hollow almost cost me a keyboard in frustration.

Ultimately though, these flaws pale in comparison to the tremendous adventure Outer Wilds offers. Like all the very best games, Outer Wilds provides you with an experience that you just couldn’t get in any other medium. It’s a soulful, frequently awe-inspiring tale where life and death, future and past are intertwined in a way that’s entirely unique. I thoroughly recommend it.