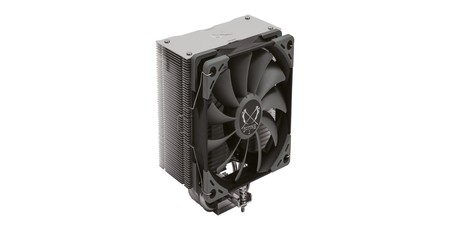 Cooling specialist Scythe has announced the launch of the Kotetsu Mark II tower CPU cooler, which it claims is 'significantly improved' over the original.

Based around four nickel-plated copper heat pipes attached to a solid cooper baseplate, the bulk of the Kotetsu's size is its aluminium finstack - the top of which, those with windowed PCs will be pleased to hear, is covered with an aluminium top plate bearing the company's logo - which offers a new asymmetrical design. The first Scythe heatsink to use what is likely to become a standard feature, the Kotetsu's redesign means that the heatsink is offset 10mm to one side and to the rear - which, the company claims, boosts compatibility with cases that have large graphics cards and heatsink-equipped RAM modules.

Beneath the heatsink Scythe has upgraded the Kotetsu Mark II to include the latest version of the company's Hyper-Precision Mounting System (HPMS), now in its third generation. Based around pre-assembled metal mounting bars with spring-loaded screws, the mounting system is claimed to prevent issues with uneven pressure distribution - something users of AMD's AM4 socket have found troubling when using older mount designs.