Designed for use in compact cases where a traditional tower cooler is too bulky, the Kabuto 3's main change is in a major lifting of the fin stack: compared to the Kabuto 2, Scythe claims, the Kabuto 3 is compatible with a far wider range of high-end memory modules with tall heatspreaders, and can be installed without fouling. Another change comes in the form of a switch to a hybrid heat pipe system, which sees three larger 8mm heat pipes joined by two 6mm heat pipes to improve heat transfer from the nickel-plated copper baseplate.

The Kabuto 3 comes fitted with a Scythe Glide Stream 120mm fan, itself boasting of a redesigned and more compact centre hub allowing for larger fan blades to reduce air resistance and noise levels. According to Scythe's own testing, the PWM-controlled fan ranges from 4 dBA at its bottom-end 300 revolutions per minute (RPM) speed up to 28 dBA at 1,400 RPM. Naturally, the company is also making much of the ability of top-down coolers to provide improved airflow to the chipset, memory, voltage regulation modules, and other motherboard-mounted components compared to a tower cooler.

The Scythe Kabuto 3 comes with Intel and AMD fittings for all recent socket types, and has been announced with a recommended retail price of €38 excluding taxes (around £30). More information is available on the official product page. 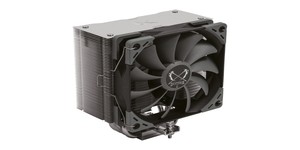