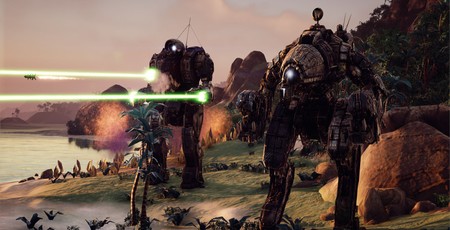 Released back in April and part-funded by a successful crowd-funding campaign, BattleTech puts the player in control of a lance of mercenary battle machines from the eponymous tabletop game universe as their MechWarrior pilots carry out missions for the noble houses of the Succession Wars. Its launch brought critical praise, thanks in no small part by the fact that Harebrained Schemes is led by former FASA staffer and creator of the original BattleTech board game Jordan Weisman while other developers had worked on the earlier MechCommander franchise.

Following its early success, Harebrained Schemes has now confirmed it plans to expand the BattleTech universe with a downloadable content pack dubbed Flashpoint. 'Flashpoints are high-stakes branching short stories, comprised of procedural mercenary missions linked together with new crew conversations, special events, critical choices, and valuable rewards,' the company explains. 'To ramp up the intensity, some Flashpoint stories will feature "Consecutive Deployments" in which players won’t be able to repair their 'Mechs between missions.'

As well as the aforementioned Flashpoint mechanism, the expansion pack includes three new BattleMechs, named as the melee-focused Hatchetman, the high-speed Crab, and the multi-range Cyclops, along with a new beach biome and new encounter dubbed 'Target Acquisition' that sees players compete to take control of three territories.

The expansion requires a copy of BattleTech to run, and supports both Windows and macOS with full cross-play. A release date has not yet been provided, but more information and a teaser trailer are available on the official website.