£1,800 is a reasonable budget for a high-end, air-cooled gaming PC that will play games smoothly at high resolutions for years to come. With Nvidia's continued dominance in the high-end graphics market, the vast majority of PCs at this sort of price tend to sport a GTX 1070 or GTX 1080 graphics card. As such, the highlight feature of the new Titan Osprey system from Overclockers UK is its CrossFire AMD RX 480 setup. We've not yet had a chance to play with two RX 480s together, so we're keen to see what they can do. Click to enlarge
OcUK is one of many system integrators taking advantage of Intel's new Z270 chipset[eurl], with a swathe of new and updated PCs ready to buy immediately following the lifting of the sales NDA yesterday. We've already seen one example, the well crafted [eurl=http://www.bit-tech.net/hardware/pcs/2017/01/06/dinopc-c3-mod-gaming-pc-review/1]DinoPC C3 Mod Gaming PC, which does indeed feature a GTX 1080 and costs £2,100. The Titan Osprey from OcUK uses the same motherboard as that PC – the Asus ROG Strix Z270F Gaming. It's a solid, enthusiast-grade board, sporting decent onboard audio, dual M.2 sockets, and USB 3.1 Type-A and Type-C connectivity. The only potential downsides are the relative lack of onboard USB ports and the absence of Wi-Fi. The Titan Osprey does give you an extra couple of USB 3.0 ports with the case's front panel, but Wi-Fi isn't included. Still, if this is important, OcUK can easily install an add-in card, the spare x1 PCI-E slot above the primary GPU being ideally positioned for such an ask. Click to enlarge
The board is paired with the Core i5-7600K, a powerful four-core CPU that's a great choice for gamers and saves you cash over the Core i7-7700K, which is an available upgrade if the extra threads are needed. You also get a pair of 8GB Corsair Vengeance LPX DDR4 sticks running at a nippy 3,200MHz – that they're low-profile is important for allowing the all-in-one liquid-cooler to fit. The XMP profile is correctly set in the BIOS, and the CPU is overclocked at 4.9GHz with a voltage of 1.35V. OcUK originally sent us the system at 4.8GHz, but discovered the majority of chips were capable of 4.9GHz, so that's what it'll be sold at. As such, 1.35V is the safe option it told us to use, but purchased systems would use lower voltages if possible. You get a couple of BIOS profiles saved in the EFI, allowing you to easily have a play with different settings and revert if things go awry. Click to enlarge
For the graphics hardware, OcUK is using a pair of Asus Radeon RX 480 Strix OC 8GB cards. These are beasts – we found them to be a bit overkill in size and price when we reviewed our sample. However, in this air-cooled, dual-GPU setup, they make perfect sense, as you want maximum cooling potential to prevent throttling and excess noise. The motherboard selection also helps by ensuring there's a full slot's worth of space between the two cards.

The Corsair 460X is a great case for a high-end build that doesn't go overboard on size (or price). OcUK has used the standard version rather than the RGB one, which nets you a trio of RGB front intake fans in place of the single red LED 140mm fan here – the RGB version is an available upgrade with the configurator. The tempered glass front and side panels look great, showing off the internal lighting, while the PSU cover hides the mess of power cables. You also get all-round dust protection. Click to enlarge
CPU cooling comes courtesy of the Asetek 570LX all-in-one liquid-cooler, which has been fitted with a pair of Noiseblocker 120mm fans. These are mounted to the roof as intakes, which is a break from the norm but a good idea nonetheless, as it means air blown across the radiator will be as fresh and cool as possible instead of recycled from inside. You also get the standard 460X case fans: a 140mm front intake and 120mm rear exhaust. The pump, CPU fans, and case fans are all properly connected to the appropriate motherboard headers, with the two Noiseblocker fans benefiting from automated fan control courtesy of their 4-pin PWM connectors; OcUK uses the motherboard's default fan profile here. Click to enlarge
The 512GB Intel 600P M.2 SSD gives you a great combination of high-speed PCI-E storage and capacity, though it's nowhere near as quick as a Samsung SM961. Appropriately, it's installed in the PCI-E only 2280 M.2 slot just above the primary graphics slot – the green PCB is a little at odds with the rest of the system, but it doesn't stand out. It leaves the second M.2 slot spare, and since this one supports 22110 drives and both SATA and PCI-E devices, it leaves you a lot of upgrade options. That said, access to this is blocked by the secondary GPU. As well as this primary drive, a 2TB HDD is installed, neatly hidden in the lower chamber.

Sadly, we did notice some carelessness on OcUK's part. As we mentioned in our review of this motherboard, the PCI-E M.2 slot operates at x2 mode by default, but most PCI-E SSDs utilise four lanes (x4 mode). This is an available setting, but OcUK failed to use it, which will bottleneck the SSD in certain situations. In some ways, Asus can be blamed, as it seems silly having x2 as the default. Nonetheless, a quick SSD benchmark would have revealed the error, so it's hard to overlook. OcUK has promised to remedy this in all future builds, naturally. Click to enlarge
Rounding out the build is a Super Flower 750W PSU with an 80 Plus Gold efficiency rating and semi-modular cables. We've no real complaints here, although the exposed, coloured cables on the 24-pin connector slightly mar the clean internal looks, which OcUK has managed with some decent cable routing. The thick power cables do push on the side panel a little, meaning it doesn't quite meet the case properly at the bottom, but there's no visible bulge. Click to enlarge
OcUK has definitely given thought to this system's aesthetics. The motherboard and both graphics cards sport Asus's Aura RGB lighting system, and this has been expanded with a single RGB strip that is connected to the board's top RGB header and runs along the roof of the system on the window side. A second RGB header means you could add a second strip in the configurator, too. All the lights are synchronised to a red breathing effect, matching the red glow of the front fan nicely – we appreciate the consistency. Of course, you're free to use the Aura software to customise the effects of the components together or independently, although we did find it a bit fiddly – this is the fault of Asus rather than OcUK, however. With the tempered glass and virtually all-black build, the lighting looks elegant rather than garish in our opinion. Click to enlarge
One final thing to draw your attention to is the outstanding warranty that comes with this system: a full three years. We emphasise full, as unlike most multi-year warranties that only cover labour costs for the advertised term, here the three years covers everything: shipping costs, parts, and labour. As an added bonus, OcUK will provide labour-free upgrades for all three years: If you fancy an upgrade, you need only pay for the shipping costs and the part(s), and OcUK will upgrade the PC for you at no extra cost, returning it fully assembled and including your older parts for you to keep (sell). For people like ourselves used to tinkering, this isn't of much benefit, but for novices it will certainly appeal, and the full three-year warranty is really hard for anyone to argue with. 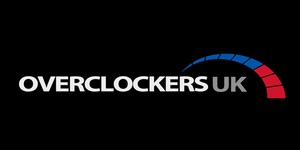 With a green case, green LEDs and green cables, The PC Customiser is nothing if not consistent.