Whereas head pressure and flow rate are somewhat tricky definitions, restriction is not. Both HP and FR are measured by the pump being in zero-constriction environments (i.e., the best it could ever be). That means that every time flow rate is less or pressure is less than what's on the pump's box, there is restriction.

Restriction is anything that impedes flow, thereby reducing the amount of energy in the water - and it happens to some degree or another any time anything is in the way of the flow of open water. For instance, if you have a 90 degree elbow in your loop, the water is rushing towards it and slams into the wall of it before diverting its path. This "slows the water down" - it impedes its natural flow.

How? Remember your laws of inertia, and think of it like this: as a water molecule moves in the pipe, it wants to continue to go the way it already is. Obviously, it doesn't just naturally turn - it continues until it cannot (collides with the elbow wall). This means it has to stop, and then has to start again in a different direction - which it has to borrow energy from its neighbors to do.

Restriction is created by sharp turns, sharp decreases in path volume (i.e., a spacious block crammed back into an 8mm ID hose) and things in the general path of the water. The more restriction there is, the more head pressure from the pump is needed to compensate for it, which means more noise and power.

Now, think of a CPU water block. Most blocks have their barbs on the top, causing water to smash into the bottom before going sideways through it. In its journey sideways, it collides with bunches of little copper rods standing upright in its path, which it has to stop for as well. Then, it has to collide with the side of the block before eventually finding its exit at the top again. Each molecule of water is treated like a ping-pong ball until it haphazardly limps out of the block - the very definition of restriction. The Cooler Master Stacker mod by Ediejo and Snakez featured colour co-ordinated UV watercooling
On top of that, restriction is largely an additive quality - this is not entirely perfect, but the pressure drop across each block is cumulative. Therefore, you never want to add more blocks than you absolutely need, or you'll use up your head pressure and slow your loop to a crawl.

With that in mind, it seems like the most optimal block design is one where the inlet is on the side, it flows over a flat copper bottom, and flows out again with a minimum of size changes. Of course, that is far from the case - if we remember back to how all of this works, there is more surface area to help with the contact. Each collision with the copper on the block is what transfers heat from the block to the water - and that is what keeps your CPU cool.

The same concept goes to work cooling the water down, as the snake-like path of a radiator means water is constantly crashing into the copper walls - transferring that heat out from the water and into the radiator, where it can be exhausted by air. from your big, 120mm fans.

Thus, all of water cooling becomes a balance - matching the right flow and head pressure with the least restriction possible that still cools the water acceptably.

A note on pressure, turbulence and block quality

We could go for hours on the depth and complexity of waterblocks on their own, much less in a complete system, but there is a very important chemistry/physics advanced concept that need to be covered here despite this being a "beginner" article. That concept is known as the "boundary layer."

Boundary layers are, to quote from a great explanation in our forums, "crucial to fluid dynamics." Essentially, no matter how smooth you think something is, on the molecular level it's pretty rough. The inside of your water block is no exception. These rough patches trap fluid molecules until a tight "skin" is created to smooth it all over. Those fluid molecules aren't moving, aren't getting cool, and transfer a whole lot less heat than the copper block. The concept is further confused by the idea of laminar flow, but they're both solved with the same method.

So, part of water block science is keeping this boundary layer broken up, particularly right over the CPU core - and that's done by turbulence. Think of this like holding your finger over the end of a running hose - forcing so much water through such little space causes a high-pressure spray. The same principle applies to most good blocks, which shoot this water at high velocities onto the block base. But be warned - it's a double edged sword, as making that pressure happen puts yet more restriction into the loop.

However, some of the best blocks (from Danger Den, Aqua Computer and D-Tek) have compensated for this with well designed innards. You really do get what you pay for.

So if restriction in the blocks and radiators are good, but not all blocks of equal restriction cool equally, how do you know a good one from a bad one? The C/W graph of a Swiftech Apogee GT,
as provided by the company.

Well, over time, the industry began to adopt a unit of measurement, known as the C/W. C/W stands for the degrees Centigrade that the block differs from either the air or coolant temperature, per Watt of heat output by the CPU. This comes with one really big problem, as postulated by Bill Adams back in 2002 - and it hasn't been fixed yet. In fact, the industry just put a different label on it - Rs-a, which is the technical name for the CPU to air differential.

So if the measurements are bust, how do we really know a good block?

The best way I've been able to find (and most forumites will agree) is with real world testing, looking at the delta between the CPU core with the water block vs. the CPU core with an established air-cooling method, using the same thermal compound in the same ambient air environment. Unfortunately for most reviews, that means testing each block each time - particularly with the advent of bigger features like quad cores. 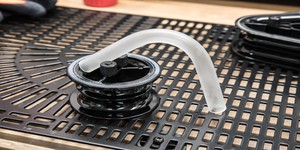