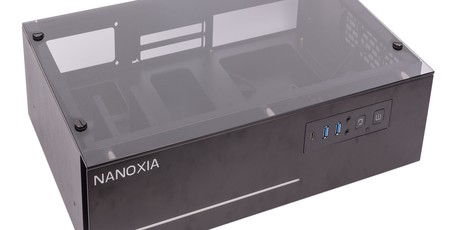 To release the drawer, you simply remove four thumbscrews at the back of the case. In some ways, this design is better suited to a smaller case, as the depth is reduced. With the drawer out, you’re still looking at around 600mm of depth, but most decently sized workbenches and desks will just about accommodate this. If you don’t want to pull the drawer out, you can also undo the four fasteners on the tempered glass side panel and remove that instead. The HTPC layout keeps things flat and allows you to see every bit of hardware inside. At the right is the motherboard, then the GPU goes next to that, connected via a PCIe riser cable. On the left you have the PSU and SSD area.

As you might expect, hardware installation is a little more fiddly than with most cases. Motherboard standoffs are not installed, and GPUs are limited to 270mm in length, so even reference boards like ours have a little difficulty fitting (and their single fan doesn’t align with the ventilation in the bottom panel).

We also found that the mainboard cables on our Corsair SFX PSU were too short to reach the connectors on their own; thankfully, Nanoxia includes extension cables for both, although even then the 24-pin one was close to full stretch. Since SFX-L dimensions are the same as SFX except for depth, you should be able to mount one in this case. However, you will almost certainly be pushing up against the SSD trays and may have to remove them (or creatively reposition them). You will also block access to the routing hole; the case is evidently designed solely for SFX PSUs, which isn’t a huge deal, but some added flexibility would still have improved things. You do at least get some thick rubber feet for the unit to rest on. The included PCIe riser cable is sensibly very short and clad predominantly in black so as to not become an eyesore. There's a simple locking mechanism for where your GPU slots in as well.

For drives, the aforementioned SSD trays are metal and removable via a couple of screws – pretty self explanatory. There’s also one mounting position for a 3.5” drive in front of the motherboard, with rubber washers prefixed to the mounting holes. This will be an adequate level of storage for most SFF users.

In case it wasn’t obvious, water-cooling is not something this case is designed for. There is nowhere to mount radiators (not even 120mm all-in-ones), so unless you’re willing and able to get very creative, you’ll want to look elsewhere if this is something you had in mind. For cable routing, there are five holes in the floor of the drawer, each guarded by a rubber grommet. For the most part, these are sized and positioned well, although the grommets on them come off a bit too easily. With a couple of Velcro cable ties, additional zip ties in the box, and a handful of anchor points on the underside, you can get everything strapped down without too much hassle. You’ll know when you’ve done it right, as you won’t get any resistance from cables dragging on the floor when you attempt to close the drawer.