The out-of-box cooling is pretty admirable, and the CPU delta T of 51°C is particularly strong and near the top performing cases. Typically, exhaust airflow is more important to good performance here than intake airflow, which may seem at odds with the 570X's trio of intake fans. However, what these fans do is create significant positive pressure, forcing air out of the vents in the rear and the roof and preventing heat from building up around the CPU. Click to enlarge
The GPU also managed a delta T of 51°C; we actually thought it would run a bit cooler, but we've found more spacious cases tend to suffer a little, and in the grand scheme of things it's not a bad result. If you're installing two cards, which seems likely given the cost of this case alone, those multiple front intakes will definitely help with feeding cool air to an area where it will be badly needed.

Running the three SP120 RGB fans at full speed, like we did, does result in a fair amount of noise output, although the maximum speed isn't excessive so it doesn't turn the case into a wind tunnel. Most users will be fine simply running them off of fan-controlled motherboard headers, as full speed certainly won't be needed when your PC is idle or only being used casually. The Crystal Series 570X RGB is not a case without flaws, but it's pretty awesome nonetheless. To some, of course, it will be tasteless, but it does feel like the ultimate expression of merging two of the latest trends in hardware: RGB lighting and tempered glass. It's a pairing that feels more at home in a case like this (and the 460X) that goes all out rather than in half-hearted budget attempts like the BitFenix Aurora. Focussed designs tend to fare better than those that try to please everybody, and the 570X is clearly very well geared towards housing a seriously eye-catching build. Click to enlarge
Still, there are those flaws. USB 3.1 front panel connectivity can't really be neatly integrated yet, although some users may have wanted it. Moreover, we'd like to see a less fussy cable management system – a front wall for the PSU cover, an easier to use cable management channel and better Velcro cable ties, for example. You may have to work with it a bit, but this is clearly the sort of case designed for users who are happy to spend time perfecting their build and making it look just right. We certainly don't want to discourage that behaviour – the 570X RGB is over the top, sure, but it's a refreshing break from the norm and bound to excite those looking to house their new hardware in something a bit special. 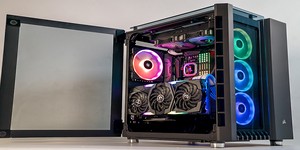