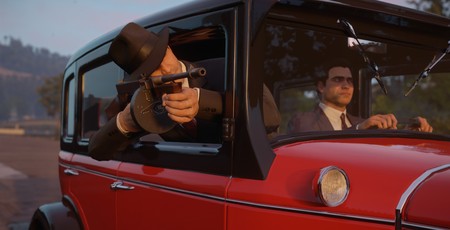 Mafia: Definitive Edition has almost as much in common with film remakes as it does games. Not only has the entire experience been reshot in a new, modern engine, the script has also been extensively rewritten, and the actors playing the main roles recast. Perhaps this shouldn’t be surprising, given that Mafia was originally the more cinematic cousin to the early GTA games, more interested in character-driven storytelling than open-world shenanigans. Unlike many Hollywood remakes, which tend to throw the baby out with the bathwater, the changes in the Definitive Edition largely improve the core experience, and mostly remain true to the spirit of the original game. Set during the 1930s in the fictional American city of Lost Heaven, Mafia puts you in the pinstripe suit of Tommy Angelo, who starts the game as a taxi driver struggling to get by in the shadow of the Great Depression. After helping mobsters Paulie and Sam flee from a rival gang, Tommy falls in with the Salieri Crime family, slowly working his way from low-level thug to one of Salieri’s most trusted footsoldiers.

The spine of Mafia remains almost exactly as it did back in 2002. Each of the main missions has been fully recreated, from Tommy’s early years smashing up the cars of rival mobsters and collecting protection money from local businesses, to the larger, more action-packed later missions filled with intense gunfights and thrilling car chases. And yes, this includes the infamous race mission, although the game’s reworked car handling makes it far easier to finish than it was originally.

Also as before, the main story is pretty much the whole experience. Hangar 13 has resisted the temptation to throw in extra side missions and make Mafia a more traditional open-world game. Prior to release, I thought adding extra content might be a smart thing to do, giving players something new to experience alongside the main story. Having played it, I’m glad Hangar 13 didn’t. It’s nice to beeline through the story without worrying you’ve missed something, while the campaign makes sufficiently good use of Lost Heaven’s cityscape that you don’t feel like you’re losing out on exploration. Speaking of the City, Hangar 13’s recreation of Lost Heaven is marvellous. From the smoke-billowing chimney-stacks of the city’s industrial district, to the skyscrapers and neon billboards of Central Island, the place drips with authentic 1930s atmosphere. Lost Heaven doesn’t offer the same level of detail as, say, GTA V’s Los Santos. You’ll see advertising billboards repeated often, and the city’s skyline can look a little boxy – especially at night. But the game strives to immerse you in the period beyond the visual too. You’ll regularly stumble across newspaper clippings or radio news segments that detail the wider ongoings in America, such as Hoover’s fumbling attempts to combat the depression, and later, Roosevelt’s New Deal policies, and the ongoing debates over prohibition and its effect on organised crime. Consequently, not only does the city look much better than it did in the original, it also feels richer, more convincing.

As for what you do in Mafia, play is equally divided between – and please pardon the technical jargon here – drivey bits, shooty bits, and talky bits. The drivey bits mostly involve travelling from place to place, acting mainly as a buffer between the talky bits and the shooty bits. Nonetheless, the period cars are absolutely fantastic to drive. Bulky, heavy machines, they take a long time to accelerate and decelerate, which makes them terrifying at full speed, like driving a giant breezeblock. You can palpably feel the weight of them in corners too, which makes the game’s occasional car chases a real wrestling match with the steering wheel. There are a couple of other clever touches to Mafia’s driving that I want to highlight. Navigational aids appear in the form of dynamically generated street signs that direct you to your next destination. This is a smart and immersive way to ensure you always know where you’re going without having to constantly glance at the minimap. In addition, Mafia’s adjustable highway code returns, where you can customise the severity of the game’s traffic laws. You can play it like GTA if you want to, but you can also play with speed limits and police that will give you tickets if you drive too fast or get into an accident. I prefer the latter, because it’s more authentic, and also I’m a good boy who eats all his vegetable and washes behind his ears.

The shooty bits, meanwhile, have been reworked to bring the game more in line with Mafia 2, adding a cover system and shifting the camera to an OTS perspective. I would describe the gunplay as acceptable – sufficiently entertaining with weapons that feel weighty and satisfying (I particularly like the shotguns and the bolt-action rifle). That said, the cover system is overly sticky, while character animations aren’t fluid enough. You occasionally end up wrestling with Tommy to get him into the right aiming position, particularly the case when an enemy gets close up. Finally, there are the talky bits, which are undoubtedly what Mafia does best. The rewritten script is generally excellent, more detailed, more authentic, and also better at fleshing out the plot beats and certain characters. Salieri in particular benefits from the remake, framing him as a highly controlled and calculating individual, fully entrenched in the traditions of the Mafia. Another much improved character is Sandra, Salieri’s barmaid and Tommy’s future wife. Little more than an object for Tommy to romance in the original, here she’s smart, self-assured, and fully versed in the nature of Salieri’s business.

While the writing is improved overall, it is also where my main issue with the remake lies. Although some characters benefit from their rewrites and redesigns, the main three – Tommy, Paulie and Sam – do not. In the original game, Tommy came across as a genuinely decent person who is seduced by the glitz and glamour of the Mafia lifestyle. To then see him mercilessly gunning people down was really shocking, effectively conveying his moral descent. One mission ends with a bloody gunfight in a Church, and the priest’s desperate appeal to Tommy’s soul has a real power to it. By comparison, remake Tommy comes across as a greaseball from the off, and it’s not surprising to me that’s he’s fallen into this life. Paulie and Sam, meanwhile, have had their personalities filed down to the point where they’re virtually interchangeable. Sam in particular suffers from the redesign. In the original, he’s physically powerful and emotionally inscrutable, which is important for some of the later plot developments. In the remake, if anything he’s smaller than both Tommy and Paulie, and comes across as just another wiseguy, with no specific talents or traits.

The end result is the core characters are not as likeable as they were in Mafia. This doesn’t make the game worse, exactly, but it does alter the slant of the story in a way I didn’t enjoy as much. It’s a shame, because otherwise the script is superbly written, and were these elements more aligned with the original, I think it would make the Definitive Edition a must-play. Nonetheless, this is a still a thoroughly enjoyable remake of a minor classic, one that enriches the world and streamlines the core experience.