Wolfenstein: The New Order is a very strange game. It's frequently conflicted in tone and ranges wildly in quality one moment to the next. It flings together so many different systems that it has no right to hold together as well as it often does. Its story merges romance and human frailty with an always pulpy and sometimes absurd alternate vision of a Reich controlled future. It is Love in the Time of Nazi Robots.

But amid this frenzied crush of Panzerhunds and Moon guns and Jews who call you Shimshon is one visible constant, and that is that Wolfenstein really tries. It tries harder than a rocket-propelled Rugby player to entertain you, and this makes it highly endearing, even when it gets things wrong. "The New Order" is an appropriate subtitle, as this latest reincarnation of Wolfenstein has almost nothing to do with the previous entries in the series. There's no Mechahitler and no undead Nazis. There isn't even a direct reference to the eponymous castle, (although there is a castle which might be that castle. The only real link is the presence of William 'B.J. Blazkowicz, who we are reunited with in a spectacular prologue mission that is roughly half the length of a standard Call of Duty campaign in and of itself.

This mission, set in 1946, sees Blazkowicz and a massive Allied force making a desperate assault on the fortress of General Wilhelm "Dethshead" Strasse, whose inventions and leadership have turned the tide of the war in favour of the Nazis. Without going into specifics, this last stand ultimately fails, and events skip to fourteen years later in a Nazi dominated world, with Blazkowicz joining up with small resistance force to make one last last stand against the Third Reich. It's a story that is in parts well told and terribly told. Blazkowicz is softer than your average meathead, and susceptible to the odd bout of internal monologue, but it's all a bit too brooding, and difficult to take seriously when you've just blown the head off a Nazi with a laser gun. That said, there are several character interactions set away from the action which really do work as compelling human drama, where arguments between the resistance fighters reveal specific frustrations or vulnerabilities that give you a glimpse into their souls.

The New Order also occasionally makes some pretty astute observations about the nature of Fascism, the conviction that makes it capable of great scientific and architectural achievements, but also terribly human atrocity. Perhaps this is easy to do after eighty years of hindsight, but there have been plenty of World War II games which have failed in this regard. 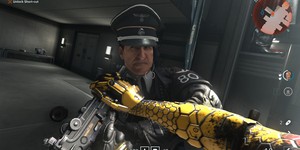