What's really incredible about the single-player campaign, though, is how confident it is. Titanfall 2 has a lot of great ideas but that's not what confidence is. The confidence in question is having all of these great ideas and mechanics and throwing them away after a short time. There are so many incredible settings and gadgets in the game that are given the briefest of moments to shine and then discarded, never seen again for the rest of the campaign. Over the eight hours it took me to finish the game I fought my way through a factory building prefabricated houses, blasted a series of enemy mercenaries in one-on-one mech fights — one of which ended with me pulling the unlucky Pilot from her mech and crushing her in my giant robot hands — and then there's Cause and Effect.

I don't want to talk further about Cause and Effect, because even mentioning its primary mechanic is to give the game away. Cause and Effect is one of the boldest levels of an FPS game I've played in years. We've become somewhat cynical as an industry about the merits of the first person shooter in years gone by, but the level deserves to be mentioned in the same sentence as Halo's Keyes, Medal of Honour: Frontline's D-Day assault or Half Life 2's We Don't Go To Ravenholme. There's something about the strength of the mechanics paired with how satisfying it feels that makes Cause and Effect the pinnacle in a campaign filled with strong moments. The multiplayer will be immediately familiar to anyone who played Titanfall. It's cleaner now - better designed and the multiplayer loadouts and unlock systems are a little smoother. Titanfall 2's big promise is that there is no season pass; no price for new maps and modes to come. It says a lot about the state of video gaming in 2016 that that's a selling point, but it's heartening to see, even if all the grind in Titanfall 2's multiplayer feels like a grind I can do without.

The multiplayer modes are fun at least, pitting pilot and Titan against a variety of different objectives and NPC characters. I've enjoyed it quite a lot, although the skill cap is high and over the course of my first five matches I struggled to get more than five kills on actual pilots. I did find a lot of ways to mix it up though - whether it's by playing as a sniper with a grappling hook and a long range rifle, or by getting into the thick of things by turning invisible and stalking people with an SMG, there are plenty of different ways to blast foes into oblivion. One of the most interesting things is a rocket arena styled coliseum where you can bet digital currency on a one vs one fight between you and another pilot, with the winner getting a cosmetic item. It's exciting, fun, and I've won all three of the ones I've attempted so far so I feel all fuzzy and warm talking about it.

The multiplayer is fast-paced, and if you enjoy the idea of a sci-fi shooter with fast gunplay and a mix of mech/on foot sections, you'll enjoy it. It's about as good as expected. For Titanfall 2, though, the biggest surprise, and the reason I'd recommend it, is the single-player campaign. It's my favourite campaign this year, and is a must buy, even if you wait for it to go on sale. 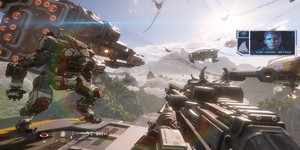