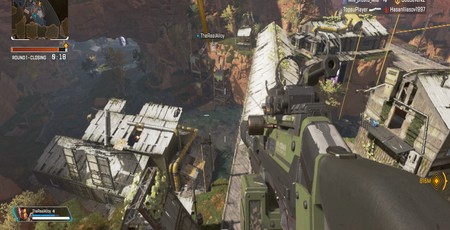 Confession time. I was entirely sceptical about Apex Legends when it was announced and launched at the same time. I heard the creators of Titanfall (and the brilliant Titanfall 2) had made a battle royale game and immediately felt weary. Here’s another hugely talented developer leaping upon gaming’s biggest bandwagon, surely to sacrifice itself upon the altar of the almighty Fortnite. And oh boy is Apex Legends worth a look. It is comfortably the most enjoyable battle royale game I’ve played. More than that though, it’s a team-based, online multiplayer that actively encourages players to be nice to each other. Structurally, Apex Legends is the same format as Fornite, PUBG, and the rest. Instead of 100 players being dropped onto an island, it’s 20 squads of three (so 60 players in total). You launch from a dropship onto the map, rush around hoovering up equipment, and then gradually make your way to the centre of ever-shrinking circles until only one squad remains.

The main difference between Apex and other battle royale games is that you can’t play solo; it’s fundamentally a team-based experience. Not only that, it’s a team-based experience that takes major cues from Overwatch, with players selecting one of eight playable Legends, colourfully designed characters who are each empowered with multiple unique abilities. On paper this all sounds like my worst nightmare. I don’t mind battle royale games so long as I can be quietly rubbish at them on my own. But being forced to play as a team where you have to talk to Internet strangers? Where there’s an underlying expectation to perform? Ugh, I’d rather eat Theresa May’s mouldy jam.

But I will eagerly join up with my new bestest buds SKrUNgggggg and NooBlasta69 for a round of Apex Legends, because it enables you to work together efficiently as a team without having to say so much as 'Hello' to your teammates. And it’s all thanks to the majestic Ping system, a highly efficient way-pointing mechanic that lets you alert your team to environmental information and make suggestions about how to progress. If you want to suggest your squad moves to a new location, you simply turn in that direction and click middle-mouse, at which point an icon will appear in the air and your character will say something like, 'Let’s go this way.' If you click on some loot, you character will highlight it and describe what kind of gun or grenade or equipment upgrade it is. You can double-click to highlight an area where you’ve spotted an enemy, or click and hold for a range of more nuanced options such as, 'Watching this area.'

It’s absolutely superb. In fact, it’s so handy and effective that, although you can still use regular voice-chat, I’ve only played one match in which somebody talked, and that was purely to say 'Great game guys!' at the end. It just makes more sense to let the characters do the talking for you, which is beautifully blended by Respawn into the game with other, incidental comments on the progress of the match. You can even verbally thank other players when they drop equipment that you subsequently pick up. All of this makes Apex possibly the most pleasant online multiplayer experience I’ve ever had. I’m tempted to say it’s the best thing about the game. But honestly, it’s just one of many features that make Apex brilliant. As you’d expect from the creators of Titanfall, Apex is a delightfully slick and tactical shooter. It’s built off the back of Titanfall’s heavily modified source engine, which means it has a similarly slick pace and twitchy aiming in a way that’s easy to get to grips with. It also includes the best ground-slide since Bulletstorm, letting you glide gracefully down a hillside like a human sled.

More generally, Apex doesn’t possess quite the same level of manoeuvrability as Titanfall, lacking the possibility to wall-run and jetpack-jump. Also, despite being officially part of the Titanfall universe, it doesn’t have any Titans in it. Fortunately, Apex more than makes up for these divergences with its roster of quirky characters. Of the eight classes available, six are playable from the get-go. Highlights include Bloodhound, who can track the footsteps of enemy squads and scan an area to reveal nearby enemies, while his special power sends him into a beast-like rage. Bangalore, on the other hand, can deploy a smokescreen to provide cover for your squad and also barrage an area with artillery. All of them are good, and about half of them are great. So you should find two or three that you’ll happily play a match with.

Apex also tries to avoid that fundamental flaw in battle royale where you’ll run around for 10 minutes before being killed from nowhere and forced to start over. In Apex being knocked down or even killed is not necessarily the end of your game. If you’re knocked down, a squad-mate can easily revive you. If you’re killed, your team can pick up your tag and take it to a respawn point, where you can redeploy into the field (sans equipment). Not only does this help relieve one of battle royale’s more frustrating quirks, it also makes combat more interesting. Battles ebb and flow more, with squads often coming back from what seems like certain defeat. And I haven’t even mentioned the guns! Apex’s guns are wonderful, snappy, crackling death-machines that are easy to handle and satisfying to fire. There are around five different classes, each of which has multiple weapons to choose from that do slightly different things. The Mozambique is a one-handed shotgun that’s quick to prepare and fires a concentrated burst of pellets, handy if you suddenly find yourself in close-quarters battle. One of my favourite weapons is the triple-take, a sniper rifle that fires three bullets in a horizontal line, making it easier to hit distant targets.

As for flaws, well, it’s still a battle royale game, which means it remains possible to have a match where nothing happens and then you die; it’s just less likely. Moreover, Apex gets you back into the fight almost immediately - there’s no waiting around in lobbies for servers to fill up. I also find that, while visually it’s very colourful and inoffensive, the game does look rather fuzzy at distances. This isn’t just unsightly, as it makes opponents difficult to pick out. Oh yes, and the game has loot crates. From what I’ve seen, however, they are largely benign, containing mostly cosmetic items like weapon skins, character costumes, emotes and so forth. Two of the game’s eight Legends have to be unlocked, but this can be done by using credits earned in-game, and there’s more than enough to keep you occupied in the meantime.

Another battle royale game is the last thing I wanted from 2019, but I absolutely adore Apex Legends. Like Titanfall every aspect of it has been crafted with thought and care and precision, and from moment-to-moment it feels beautiful to play. More than that, though, Apex makes a concerted effort to detoxify online gaming, to create an environment that everyone can enjoy without being verbally abused by some emotionally stunted 12-year-old or a Russian man with a mic that sounds like it’s wrapped in sandpaper.

For that alone, Apex Legends is hugely commendable.  For everything else on top? Well, say no more. 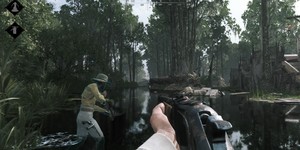 Crytek's multiplayer shooter offers the tension of Battle Royale but in a more thoughtful and flexible format. 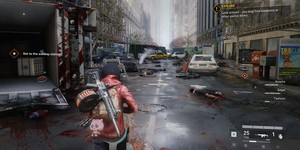