It's a tremendous example of world-building, so well designed that it's difficult to imagine that it was designed. It doesn't end there either. The towering spires and twisting alleys of Novigrad to the North, and the snow-sprinkled mountains of the Skellige isles to the West, add colour and variety to the grime and desolation of Velen's war-torn countryside. It's also worth noting that each area is complimented by its own excellent ambient soundtrack, be it the cheerful pipes and lutes of Novigrad's street troubadours, or the Gaelic laments playing over Skellige's sublime Scandinavian vistas. More important than how this world looks is what you do in it. Visiting one of the many noticeboards dotted around the map will not only provide missions and Witcher Contracts for you to embark on, but also mark points of interest in the local area. There are literally hundreds of these smaller distractions, and nearly all of them are worth investigating. Even the simpler activities such as plundering bandit camps and guarded treasure troves hide valuable rewards such as unique Witcher Gear. Yet hidden among these thirty-second distractions are vast underground lairs prowled by dozens of monsters, and abandoned communities that are repopulated once the monsters are cleared, providing access to new services such as merchants or blacksmiths.

Then there are the more involved quests; the witcher contracts and the secondary missions. The former all sport the same basic structure. Geralt must deal with a specific monster causing trouble in a particular area. But what could have simply been a recycled sequence of "Go here and kill X" missions, are instead engrossing fantasy detective stories. First Geralt must track down the creature and determine its nature using his heightened witcher senses. This means visiting scenes where the monster has attacked, examining the damage, and following trails to discover its lair. Once the situation is understood, Geralt must then prepare for the encounter, brewing potions and poisons best suited to beating the monster, before finally facing the creature down. The witcher contracts are undoubtedly one of the game's highlights. The monster designs are simply brilliant. Even the smaller mob monsters, nekkers, drowners, ghouls, are entertaining to fight. Nippy and nasty, they usually attack in groups. But the witcher contracts act as a showcase for the bigger monsters; powerful flying beasts like the Griffin and the Cockatrice, hulking behemoths such as the Fiend and the Arachas, alongside a few examples that are truly the stuff of nightmares, like the scuttling, shrieking Ekkimara, or my personal favourite, the Leshen - the horse-headed demon-king of the woods.

Complementing these fantastic monster designs is how the witcher contracts build up to each encounter through their investigative component. Frankly, the Witcher 3 isn't a great detective game. Mostly you're just looking for highlighted objects and following Geralt's lead. But it feels like a great detective game because of the detail CD Projekt imbue in each contract, adding pacing, suspense and unpredictability to each. Sometimes you'll discover that the monster you seek has been killed by another, even more dangerous monster, or that the trouble has a cause that isn't supernatural, such as a gang of roving bandits, or children playing tricks. In one particularly brilliant contract, killing the monster proved to be just the beginning of the mission, which transformed into the personal vendetta of a close friend that takes Geralt to the very edges of the game's map. This is what makes the Witcher 3 special, not the scale of the game, but sheer complexity and inventiveness of so many of its quests. Some of the secondary missions would easily form crucial parts of the main quest in any other game. It says a lot about the Witcher 3 that it considers the fate of villages, criminal gangs, kings and entire bloody nations as secondary to the main plot.

We'll discuss story in just a moment. Before that I want to talk about combat, because I've seen it criticised elsewhere for being lightweight and clumsy. Frankly, I think such accusations are completely wrong. In my view the combat is bloody brilliant (and brilliantly bloody). This is in part down to the much larger environments, which give Geralt the space he needs to properly effect his combat style. The rolling around which seemed so ridiculous in The Witcher II is now a sensible and effective way to avoid damage, getting you well out of the way of a drowner's claws and giving you a moment's respite to consider your next move. 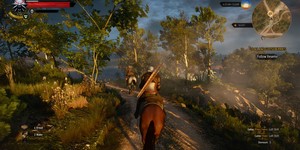 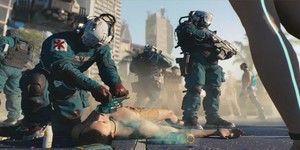