To further add to the the variety there’s a remote chance that each room can become an alternate more difficult version. Some can turn pitch dark and be lit up only by an equipable flaming torch. They could be overtaken by vampires or contain a massive pit dug out by snakes or filled with giant spiders. These rooms have upsides and downsides, they offer greater potential fortune but at a great difficulty.

Click to enlarge
Even then, there are hidden secrets like a shop level, a hidden castle or an area within the stomach of a giant worm. Spelunky is a game of strict rules, but it’s one with constant variety. It demands to be played over and over not just because there is so much to discover, but because you always feel as if you can improve on the last time you played.

Click to enlarge
On PC there’s an added mode called the Daily Challenge, which works slightly differently from the regular game. A single world is generated every day that each player around the world can only try once. It’s the same for everyone, with the same random rooms and same level structure. You attempt to get the furthest in this world and after you die or complete the game your score is put onto a leaderboard. It adds an avenue for strategic discussion afterward, with everyone being able to discuss the specific intricacies of what made this seed so unique, as well as sharing in the stress of a game-run that somehow feels more important than the others.

Click to enlarge
Everything you can possibly learn about game design you can find in Spelunky. It has found a way to be infinitely replayable due to the endless variety while still relying on familiarity. It is tough, but based on simple logic. It’s a game that you feel like you gain a mastery over, but never becomes any less difficult. 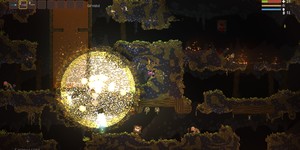 Spelunky meets Worms meets every kind of explosion in this fantastically chaotic rogue-like.