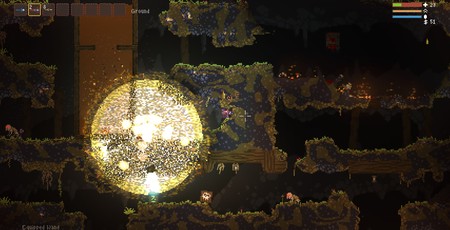 Spelunky is the most obvious comparison point for Noita, a 2D, procedurally generated roguelike in which you play a witch descending through an increasingly dangerous network of caves. But the game I think of most when I play Noita is Worms. Not only because Noita takes place in a world that is fully destructible but also because it is similarly likely to make you laugh until you ache. You would be forgiven for being surprised, given how divergent Noita’s visual style is to Worms. Noita’s many caverns are dark and haunting places, filled with strange and vicious creatures that’ll kill you quicker than a cyanide smoothie. But when you find yourself on fire and leap into a pool of what you presume to be muddy water, only to quickly discover that it’s actually petrol, it’s difficult not to laugh as you and the rest of the screen are engulfed in flames.

Noita might play like Spelunky and possess the slapstick potential of Worms, but at the same time it’s far more interesting than that. The key hook of Noita is every pixel is simulated, which is to say that every pixel has a set number of properties that will cause it to react with the world under the right circumstances. A good example of this is blood. When enemies are struck by your witchy spells, they bleed, sometimes a lot. But the blood doesn’t simply stain the ground, it forms into pools of liquid. Stand in these pools, and the blood will absorb into your robe. If you’re on fire, it will put the fire out (unlike petrol). Noita applies this logic to every material in the game. Fire will cause light damage to surfaces like earth, but will cascade through wooden surfaces and flammable liquids. Speaking of liquids, they react according to fluid dynamics. If you create a hole at the base of a pool, it will spill out, gushing down slopes and reforming at the bottom. Noita even simulates loose surfaces like snow and gravel. You’ll often encounter great piles of rock or ice that can be dug through or scattered with explosions. It's probably best explained with video, so, here's a video.

Initially, your ability to interact with this world is limited. You start any run in Noita with two wands. One fires a basic, damage-dealing, magic missile, while the other can summon exactly three bombs (many of Noita’s wands have “ammo” to stop you from being *ridiculously* overpowered.) On your first run, you’ll probably try to use these bombs to destroy enemies. But you quickly learn that casual deployment of large explosives in Noita is a very quick way to get yourself killed. The world of Noita is filled with explosive barrels, flammable lanterns, and other incandescent materials. Dropping a bomb in the wrong place can very easily turn an entire chunk of the map into a bright orange hellscape. After dying a couple of times, you’ll figure out the best use for bombs is targeted demolition, blowing a hole in the scenery so you can easily access a bit of loot. Loot comes in many strange and wonderful forms in Noita, but the two primary examples are potions and wands. Potions are bottled liquids that can be consumed, but also sprayed. A water potion (also known as 'water')  can be doused on yourself to put out flames but also sprayed across flames on terrain. More interesting potions include the Polymorph potion, which turns you (or other creatures) into another random creature from the game.

Wands, meanwhile, are weapons with random properties. And they really are random. I’ve not played a vast amount of Noita, but I’ve already encountered wands that shoot arrows, spray toxic goo, and conjure explosive orbs that ascend in an arc, meaning you have to get yourself underneath enemies at the precise angle for them to be effective. Some wands cast several different spells in succession, meaning you need to keep tabs on what the last spell you cast was, in case the next one on the list is 'napalm everywhere' or something similarly destructive. The result is that you’re exploring a world constantly on the threshold of chaos. As you progress deeper into Noita’s subterranean environs, your witch gradually becomes more capable, equipped with a wider array of wands and able to switch out spells to create a more tailored arsenal. But you’re still always one wrong move away from a spectacular demise. Despite the game’s literal explosive potential, Noita isn’t quite as punishing as Spelunky. It’s less predictable thanks to the sheer number of possible interactions, but it mitigates that by letting you refill your health at the end of each level (and within levels if you can find the relevant item).

I should also point out that, as well as looking amazing in motion, Noita also feels fantastic. It communicates the physicality of its world brilliantly. Combat is snappy and messy, and explosions have a real whumpf (that's not a word - ed.) to them when they occur. I also love some of the little touches, like the bits of gravel that scatter when you land from a jump, and the way your robe gets soaked in the different fluids you step in. Noita is currently in Steam Early Access, but it’s well-rounded enough to jump into right now. The core loop is rock solid, and there are already tons of secret areas and systems waiting to be discovered. There are a few small issues, like the game literally restarting when you start a new game (although it’s so quick as to be barely an issue). It’s also quite easy to get stuck in the scenery. Several times I’ve walked into a narrow area and been unable to get back out without essentially blowing myself up (going whumpf? - ed.). I’m not sure exactly how the developers could get around this, but it would be useful if they could.

I’m reluctant to cast a proper verdict until I see the final version, but I think I enjoy Noita more than I did Spelunky. The world simulations is hugely impressive, and it feels fantastic to play. I can’t wait to see what Nolla Games adds to the experience down the line, although given the chaos already on show, I may be watching between the gaps in my fingers. Spelunky is an incredible game of blundering and plundering