It's just that somehow it feels a little less precise. Passes seem to go off in odd angles, and holding onto possession is harder. This might mean that PES is a more accurate representation of the beautiful game, that crushing losses to a single goal in injury time or a constant slog to hit the net are part of the experience, and it feels like an authentic vision of football, even without the full complement of kits and teams. Scoring is incredibly satisfying, and when you're playing a world-class player, you can feel the speed and power behind them as you take on the defence in a daring rush on goal. I mentioned the lack of licenses earlier, but the game doesn't suffer for the lack of licensed teams and kits, although I know this'll still provide a boost to FIFA, as it does every year. Several teams are in the game, and their faces look incredible. Liverpool, Barcelona, Arsenal and several other teams are fully licensed and in the game, and those that haven't sold their license to the game for whichever reason sport comedy names like Manchester Blue, Hounslow or my beloved East London. Entire European leagues are signed up, so it hopefully won't be too long until I can play in the Premier League rather than English Division 1.

There's a complement of modes for you to play your trade. The Master League returns, letting you fulfil your dreams of building the world's finest football club, and there's also the ability to play as a single footballer through the course of his career, allowing you to relive the horror of getting picked last for football. 'You're not in the match for this one, focus on getting match fit', the game says, ignoring that the only way to improve your skills at all is to play in matches. It's nice, and making a 6'7" version of myself to dash around the pitch like a less skilled Peter Crouch was fun, but seeing as I played as a sub in one match out of five, it's probably something for purists, rather than myself. If it seems like a lot of this review has been focussing on the difference between this year's PES and last year's edition, I apologise, but it's crucial to understand that unlike any other genre, in sports you only really need one great title: it's not a question of whether you prefer FIFA or PES (although we will be reviewing FIFA later this month with the hope of answering that question for you this year) but which version of FIFA, which version of PES? If you only play one game of kick-the-egg this year, which should you choose?

For now, the answer is PES 2016. 2017 is a great game, but it just doesn't feel so satisfying to play. Getting this year's edition will give you the most recent transfer updates, and for some that'll be all that matters, and in that case you should buy this game with a smile and enjoy yourself, but if you're not fussed on having the correct line-ups for this year, you can probably make do with 2016. 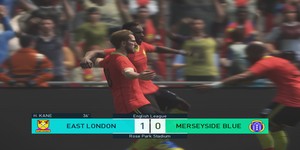