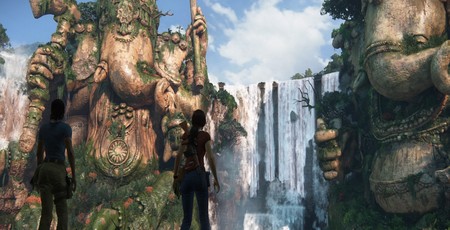 You can say one thing for the developers at Naughty Dog: They sure don't do things by halves. Originally touted as a straightforward expansion for Uncharted 4, The Lost Legacy has since been elevated to a standalone spinoff. It's a move that could easily have backfired on the developer, muddying the water in terms of player expectation and potentially tarnishing Naughty Dog's reputation for offering generous blockbuster adventures. In the end, though, there's little question that The Lost Legacy justifies its heightened status. This is a full-blown Uncharted adventure, offering the same dazzling environment design, thunderous set-pieces, and sparky characters that have made the series' name. The only notable difference is the abridged running time compared to its most recent predecessor, Uncharted 4, and one could make a compelling case that The Lost Legacy is actually better for it.

The question that remains, then, is how good of an adventure is it? Here the answer is more complex. On the one hand, The Lost Legacy smooths out many of the kinks that appeared in Uncharted 4, particularly in areas where the fourth game diverged from the perfectly distilled Uncharted formula. But it's also a game that rests heavily on the shoulders of its precursors, offering nothing that's truly new and even rehashing certain sequences from previous games. The biggest change between Uncharted 4 and The Lost Legacy is its new protagonist. Nathan Drake officially retired at the end of Uncharted 4, so for The Lost Legacy it's Chloe Frazer, Drake's on/off companion and occasional rival, who steps into his sizeable shoes. Frazer quickly proves herself up to the task, boasting a similarly sly sense of humour and confidence bordering on arrogance but also possessing a slightly darker edge to her personality. Bolstered by a charismatic lead performance from Claudia Black, it's an elegant and enjoyable transition of roles.

I'm less enthused by the choice of companion. Nadine Ross is the former leader of the private military company Shoreline, the main opposing force in Uncharted 4. Her severe and uncompromising demeanour makes her a good foil for Chloe's more freewheeling and sardonic  personality, but it also makes Nadine hard to warm to, especially considering her past. She softens as the game goes on, and the relationship just about succeeds, but I wonder whether an entirely new character, unburdened by baggage from previous games, might have suited the role better. Nevertheless, together the pair carry the story with ease, and ultimately I think The Lost Legacy is a better female-led adventure than the recent Tomb Raider revivals (not least because Naughty Dog don't see the need to torture either character for 13 hours to make them interesting). It also sees a return to the more lighthearted tone of the earlier Uncharted games, a fairly straightforward treasure-hunt that sees Chloe and Nadine travelling across India in search of the fabled Tusk of Ganesh.

That said, the quest doesn't get off to the strongest of starts. Uncharted games normally kick off like a shotgun blast to the chest, but The Lost Legacy commences with a much slower introduction. What's more, the entire first chapter keeps you on a very tight lead, with player control reduced pretty much to walking through a bunch of back-alleys as the game teaches you how the controls work for a fifth time. Fortunately, it isn't long before The Lost Legacy shifts into a higher gear, switching out the cluttered and claustrophobic cityscape for the lush Indian countryside. The Lost Legacy doesn't possess the same environmental variety as previous entries in the series – it is set in one location, after all – but it makes up for this in its astonishing attention to detail. The first third of the game takes place in a vast Indian flood-plain bursting with colour and life. We should probably stop being surprised at Naughty Dog's environment design, but it's difficult when it consistently improves so dramatically upon its previous work.

Like Uncharted 4, The Lost Legacy dabbles in open-world play, and in this it is considerably more successful. The flood-plain is dotted with several points of interest you can explore as you please, while there are various collectibles and secrets for more diligent players to track down. The other new introduction to Uncharted 4 – stealth – is also improved in The Lost Legacy, as the verdant foliage of India's grasslands and forests provide plentiful hiding places to set up ambushes and escape to when noticed. Around the halfway point, Uncharted returns to a more traditional structure, having you explore two ancient cities and requiring you to solve several truly monumental puzzles. Here Naughty Dog one-ups itself again on an artistic front, placing breathtaking sights around nearly every corner. It might be a towering statue of the Hindu god Shiva or a secluded forest glade where elephants frolic in a crystalline pool. It's little wonder that the developers have included a photo mode for players to mess around with, and Chloe can even take photos herself on her smartphone, which is a lovely if rather superfluous feature.

The puzzles themselves impress more in scale than ingenuity, while the climbing and platforming is identical to that of Uncharted 4. Combat has received some minor tweaks. The hand-to-hand combat animations are even more intricate, including some truly impressive multi-character finishing moves. But a bigger effector upon play is that the combat arenas are much more thoughtfully designed, letting players approach them from multiple angles and employ stealth to thin out enemy herds or establish a strong defensive position. There's a handful of new weapons, while the enemies are the same as they've always been, armed and armoured to the point of absurdity. This is largely how The Lost Legacy establishes its identity, by looking over the more uneven elements of Uncharted 4 and rectifying those flaws as best it can. The result is a game that's able to transition from open-world to linear set-piece, from stealth to action, in a much cleaner fashion. That said, there's also very little that's new here. The story, while fun, is by-the-numbers right down to individual plot-beats, including several scenes which are essentially rehashed from previous games.

Perhaps the most egregious example of this is the finale, which is almost identical to one of the most iconic set-pieces in Uncharted 2. This is not to say it isn't fun; it absolutely is, and there are a few twists on the formula that The Lost Legacy throws in. Even so, I couldn't help but feel that at this point The Lost Legacy rested too heavily on old glories rather than putting its own stamp on proceedings. Whether it proves to be the swansong of the series or the start of a new chapter for Uncharted, The Lost Legacy is an adventure that Drake himself would be proud of. Chloe is a fantastic new protagonist, while the game itself is a fine summation of all the best bits of Uncharted, both old and new. At times it may lean a little too heavily on that legacy, but never enough to lose its own identity.