Sony has blamed theft for copies of Uncharted 4: A Thief's End hitting shelves ahead of the official release date, failing to explain how such an event would relate to major retailers like Amazon.

Uncharted 4: A Thief's End officially launches for Sony's PlayStation 4 on the 10th of May, but some gamers in the UK have been able to get their hands on copies early. While neither Sony nor Amazon have explained how the web retail giant sent copies out ahead of time - though this could be simple confusion, the game having been delayed from an originally-planned April launch date - the former company has warned that copies in second-hand shops and on market stalls may be the result of a shipment hijack.

'We have some unfortunate news to report that a number of copies of Uncharted 4: A Thief’s End were stolen while in transit,' Sony's Shuei Yoshida said in a statement on the PlayStation Europe blog. 'While we are continuing to work with the police to resolve the matter – which is the subject of an ongoing criminal investigation – it appears that a few copies of the game have surfaced in the UK.

'An extremely talented team has worked long and hard to bring Nathan Drake’s greatest adventure to life and we would urge you to help us prevent this from being spoilt by purchasing copies of the game ahead of the launch date. Please rest assured we will be very vigilant to protect you from this as far as we can so you can enjoy Uncharted 4’s experience to its fullest on May 10th.' 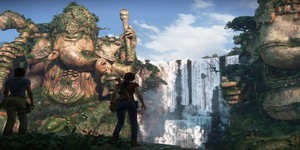