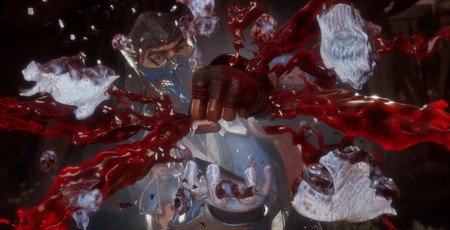 Of all the things I expected from Mortal Kombat 11, being invested in its story was bottom of the list. Fighting games generally have terrible stories (if they have one at all). That’s not because they’re naturally bad at storytelling; it’s because they don’t need them, just like a delicious cake doesn’t need a bacon topping. I like bacon and I like cake, but I generally prefer them to be separate entities. That said, Mortal Kombat 11 is one delicious bacon-cake.

Let’s talk about the bacon first, since we’ve already started. Mortal Kombat 11’s story follows directly on from the previous game, which saw everyone’s favourite lightning-wrangler Raiden defeat the evil God Shinnok, corrupting himself in the process. Mortal Kombat 11 introduces a new villain, Kronika, who is the goddess of time and mother of Shinnok. In other words, not someone you want to piss off. Indeed, Kronika decides to seek vengeance upon Raiden by, and I kid you not, resetting all of history and erasing Raiden from it. If that sounds utterly ridiculous, hoooo boy is it. But what makes Mortal Kombat 11’s story so much fun is how it commits to its patently absurd plot. In her attempts to reset history, Kronika engineers a situation whereby past versions of the Mortal Kombat fighters are thrust into the present, and canonically dead characters are resurrected. At the same time, you also have existing 'Revenant' versions of certain characters from Mortal Kombat X, who were killed and then resurrected as evil puppets of Shinnok.

All of this acts as a setup for one gigantic, pan-dimensional and pan-chronological brawl-out. The result is like someone injected an Avengers movie with horse-testosterone. Indeed, Netherrealm has clearly been inspired by Marvel’s approach to story and spectacle. The cutscenes are unbelievably lavish as well as being remarkably well-acted. I’m not a fan of cutscenes as a mode of storytelling, especially when they’re as long as they are in Mortal Kombat. But MK11 has so much ridiculous stuff going on, from giant armies clashing to a fight between an oversized tank and an even bigger jet, that’s it’s hard not to watch with stupefied glee. While visually the game looks incredible, the writing needs a lighter touch and less exposition. Nonetheless, it is still capable of being jokey and self-referential, particularly when professional idiot Johnny Cage is on-screen. The story is also filled with delightful moments of  fan-service, such as an uneasy alliance between two of the series’ most famously hostile characters, and another uneasy alliance between two versions of the same character.

The only downside of the story-mode is that it’s a little short. Ultimately, though, it’s designed as an explosive introduction to the meat of the game, namely bludgeoning your opponents into a bloody pulp. From a fighting perspective, Mortal Kombat is evolutionary rather than revolutionary, but the changes it makes are all welcome. To begin with, Mortal Kombat is easy to learn. A comprehensive range of tutorials guide you through everything you need to know about how the fighting system works. In addition, Mortal Kombat lets new players even the odds through the Fatal Blow ability. This simple yet enormously powerful move (which every character has) becomes available when your health bar is low. Landing it triggers an elaborate and grisly cutscene in which your character inflicts the kind of injuries on an opponent that any normal person would never get up from. The twist is you only get to use it once per match. Hence, it’s enough to turn the tide in a fight and make things interesting, but once you’ve used it, it’s gone, and your opponent might still have theirs in reserve.

As for Veteran players, well, you’ve got everything from finger-knotting combos to the iconic Fatalities (which are as ludicrously gory as ever) and trickier Brutalities that force you to meet certain conditions during the fight to pull them off. On top of that is the new Amplify ability, whereby certain special moves and combos can be made more powerful by pressing the appropriate button just after the move begins. For example, Liu Kang’s bicycle kick, when amplified, lasts three times as a long as normal. Mastering every character (there are over two dozen of them) is going to take considerable time. Fortunately, there’s plenty to explore beyond the stories. Mortal Kombat 11 features both classic fighting Towers (the game’s equivalent of an Arcade mode) alongside the new Towers of Time. This is a randomly generated arcade mode that enables modifiers for both players and AI. For example, you might have one fight where the arena randomly turns pitch black, essentially meaning you have to fight in the dark. But you can equip your own upgrades that let you regenerate health or call in assistance from another fighter.

Completing towers (as well as doing most other things in the game) earns you in-game currency, which you spend in the Krypt. This is essentially a third-person mini-adventure in which you wander unlocking dozens of treasure chests. These provide all manner of rewards from new costumes for characters to power-ups to use in the Towers of Time. There are two problems with the Krypt. Firstly, if you want to unlock something specific, say, a new Fatality for Scorpion, you can’t. You have to wait until the game’s Random Loot Generator falls in your favour. Secondly, the whole Krypt component is unnecessary. Why do we need a whole mini-game dedicated to unlocking stuff? Why can’t we just choose what we want to unlock in the menu.

A cynic might suggest the Krypt is designed to push players toward purchasing stuff with real money so to avoid grinding for random items. Or it could just be Netherrealm wanted to try something more interesting than a menu-screen. Either way, the Krypt doesn’t really work, as it distracts from the business of beating up your opponent and then pulling out their spine. Loot issues aside, Mortal Kombat 11 is easily the best Mortal Kombat to date, with a fantastic story-mode, a deep yet accessible combat system, and a plentiful single-player element to complement the online component. It’s not quite a flawless victory for Netherrealm, but it’s an impressive performance nonetheless.