I’ve always felt ambivalent towards Codemasters’ Dirt series. As games I’ve enjoyed them well enough, and their showcasing of off-road racing beyond rallying is to be admired. But throughout its existence, the series has struggled to establish a clear identity of its own, uncertain as to whether it is a casual racer or a proper simulation and changing its style more frequently than Lady Gaga. With the astonishing success of Dirt Rally, a game that knows exactly what it wants to be and will drive into a tree anyone who questions that, Dirt 4 could easily have been a redundant sequel. Instead, the hardcore spin-off has helped clarify what the rest of the series is supposed to be. Where Dirt Rally provides challenge, Dirt 4 offers choice. It can be just as fierce and uncompromising as its older, tougher brother, but it also has a softer touch and knows more than one way to please you. The result is the most comprehensive and flexible game in the series to date, if not quite the best.

This notion of choice is baked into Dirt 4 from the start. At the offset, Dirt 4 offers two ways to play. 'Game' is geared towards people who want to jump in and race without worrying about things like engine tuning and wheel cambers (in other words, me), while 'Simulation' is for players for whom an expert knowledge of their cars’ workings is as much a part of the game as the racing itself. It’s worth noting this choice has little to do with difficulty. Once you’ve picked your preferred playing style, Dirt 4 then offers a range of further options that let you tailor how challenging the driving itself will be, from driving assists like traction control to the tenacity of AI opponents. It also provides detailed (and optional) driving tutorage through the Dirt Academy, which covers everything from instruction on how to brake and corner effectively, to tips on driving across different road surfaces.

Dirt 4 distinguishes itself from Dirt Rally by offering a much lower barrier to entry for the player. But the series has also learned from its strongest game in other ways. Unlike previous entries, Dirt 4 places rallying at front and centre. Not only is it the first and largest part of the game’s career mode, Codemasters has adopted much of what made Dirt Rally exceptional into Dirt 4. The rally stages are as terrifyingly complex and unpredictable as before, while the five rallying environments available provide every challenge imaginable, ranging from the steep woodland hillsides of Powys in Wales to the snowdrift-flanked roads of wintry Sweden. Furthermore, Codemasters has added a considerable amount of detail into the rallying stages, introducing more hazards and tweaking how certain elements work. As well as navigating the twisting and turning road ahead of you, now you’ll also have to contend with randomised obstacles like crashed competitors and low-flying helicopters kicking up dust onto the track. Some stages have areas that are shrouded in thick fog which obscures the road all but a few feet in front of you. 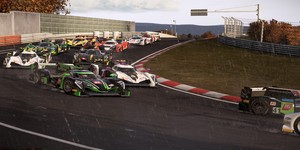 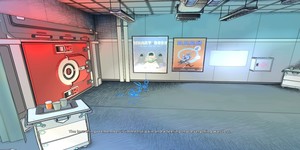