Nvidia has announced that it is bundling copies of Bungie's Destiny 2 with its GeForce GTX 1080 and GeForce GTX 1080 Ti graphics cards, even as publisher Activision admits the Windows release won't arrive until a month and a half after the game's console launch.

Unveiled back in 2013 as the replacement for Halo, Bungie's original armour-clad sci-fi shoot-'em-up intellectual property now owned by Microsoft and under development by 343 Industries, Destiny was positioned as the biggest release in the company's history since Alex Seropian launched Pong clone Gnop for the Apple Macintosh back in 1991. The promise of massively multiplayer functionality and deep lore led to it becoming the most pre-ordered new IP in gaming history, and while initial sales were strong the game was savaged for a lack of storytelling - most of the lore having been ripped out of the game itself and visible only on a separate website - poor voice acting and boring, grind-heavy mission structures. In January 2016 Bungie replaced chief executive Harold Ryan with Pete Parsons, who promised that '[fans] have yet to see our studio’s best work,' and Destiny 2 will be the first and biggest test as to the truth of his words.

Earlier this year, publisher Activision - which has signed a multi-release exclusivity contract with Bungie for the franchise - announced that there would be 'meaningful features that are bespoke for the PC community' for the release of Destiny 2, the first in the franchise to be released on the platform. Now, Nvidia appears to be betting heavily on that being true with the announcement that Destiny 2 is available with the purchase of GeForce GTX 1080 and GeForce GTX 1080 Ti graphics cards as a redeemable game code.

Nvidia's announcement comes after Bungie confirmed that the PC release will launch on October 24th - more than a month and a half after the game hits the Xbox One and PlayStation 4 on September 6th. In an effort to make the delay seem worthwhile, the company confirmed some of the 'meaningful [and] bespoke' features the PC release would enjoy, including but not limited to: Support for Ultra HD resolution and 21:9 aspect ratio displays, no frame rate cap, a 'detailed' settings menu including adjustable field of vision (FOV), and proper keyboard and mouse support with customisable bindings and text chat.

Those buying an Nvidia GeForce GTX 1080 or GTX 1080 Ti from participating retailers will also receive early access to the Destiny 2 PC beta, Nvidia has confirmed, while the offer is also open to those buying pre-built 'Battlebox' branded gaming PCs and laptops featuring either of the two aforementioned GPUs.

More information on the offer, plus a list of participating retailers, can be found on the official website. 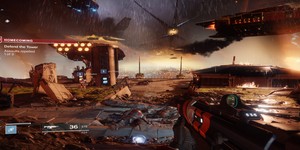