Despite the fact working samples had already been shown, that Intel executives had continually promised it would change everything, and that it was planned for release in 2010, the Intel board of directors has decided to shelve Larrabee, its consumer graphics chip. Instead Larrabee will now be made available as a software development platform: Larrabee New Instructions (LRBni).

CNet obtained a quote by Intel spokesman, Nick Knupffer, who late on Friday said that;

"Larrabee silicon and software development are behind where we hoped to be at this point in the project. As a result, our first Larrabee product will not be launched as a standalone discrete graphics product."

It maybe more than a decade since the last Intel discrete graphics card was available - the i740 - but we'll have to wait a little longer for the reintroduction of Intel graphics, despite the billions of dollars already sunk into the project by Intel.

Lacklustre appreciation of the live demo at San Francisco IDF 2009, combined with an epic die size and multiple delays have all taken its toll on the project.

Over the weekend, Tim Sweeney, the author of the extremely popular Unreal Engine, who has long been an advocate of the Intel Larrabee project, has piped up to comment as well:

"I see the instruction set and mixed scalar/vector programming model of Larrabee as the ultimate computing model, delivering GPU-class numeric computing performance and CPU-class programmability with an easy-to-use programming model that will ultimately crush fixed-function graphics pipelines. The model will be revolutionary whether it's sold as a [PCI] Express add-in card, an integrated graphics solution, or part of the CPU die.

[...]Today's GPU programming models are too limited to support large-scale software, such as a complete physics engine, or a next-generation graphics pipeline implemented in software. No quantity of TeraFLOPs can compensate for a lack of support for dynamic dispatch, a full C++programming model, a coherent memory space, etc."

We should point out that at the moment, Intel has only confirmed that the consumer part has been shelved, meaning that the HPC/GPGPU server/workstation design is still in progress, to be released somewhere down the line. Intel Senior Fellow and CTO, Justin Rattner, recently showed Larrabee could crack the 1TeraFLOP mark at SC09 using a standard HPC benchmark (SGEMM 4Kx4K calculation). Compare this to ATI's Radeon HD 5870, which hits only 544GigaFLOPS, and Larrabee is clearly a HPC monster. That said, the Radeon has been available for nearly two months already. Nvidia claims its forthcoming Fermi chip is capable of between 900GFLOPs to 1.2TFLOPs, although no actual benchmarks have yet been shown.

Is Intel's entire Larrabee project destined for complete failure? Are you unhappy that we won't have a third player in the graphic market? Or is for this news to be welcomed, the better to protect your beloved ATI/Nvidia from the big brute that is Intel? Let us know your thoughts in the forums. 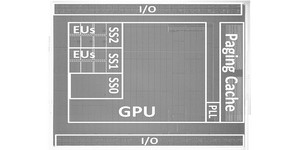