Launched in July and described by Nvidia as the ultimate tablet for gamers, the Shield Tablet is now well established in the 8-inch tablet market. Today, the green team has a trio of announcements regarding new software and features, just in time for the holiday season.

First up is the obvious one, in that Nvidia will shortly be bringing Android 5.0 Lollipop to the Shield Tablet. It will arrive via an OTA update later this month, bringing with it a new look interface, improved app performance and updates to the preloaded Dabbler and Shield Hub apps. This latter update is key, and brings us to the second and main announcement, which is that the Grid cloud gaming service will shortly be moving out of beta and will also be free for all users. After the update, users will find a “Grid Games” tab in the Shield Hub app, with over 20 games, many of which are AAA, available for streaming straight away.

The final announcement is a new games bundle, available exclusively to new purchasers of the £300 Shield Tablet 32GB LTE edition. The Green Box bundle includes free copies of Half Life 2 and Portal 2, which are already available for Shield Tablet, as well as Half Life 2: Episode 1, which is a brand new release for it. All three games require a Shield Tablet and controller to play and are exclusive to the platform as far as Android devices go. Furthermore, three more new Shield-optimised games will be available before the end of the year through Google Play: OddWord: Stranger's Wrath, Pure Pool and Strike Suit Zero.

Nvidia is billing its Grid cloud gaming technology as the Netflix for gaming, which is a bold claim indeed. It is many times more difficult to stream games effectively from the cloud than it is video, due to the non-stop reliance on low latency – after all, you can't buffer content that depends on random inputs that are processed in real time. As such, cloud gaming has yet to be done effectively, though Sony is attempting it with Playstation Now, which remains in beta. Compared to Playstation Now, Nvidia says Grid has many more times the processing power (measured in Gflops), a significantly lower average start up time for games and a higher frame rate – it targets 60fps while the competition aims for a more console-like 30fps.

Nevertheless, Nvidia remains confident, claiming that its Shield Tablet and Grid technology, coupled with the ever improving access to internet bandwidth worldwide and a healthy selection of games form a recipe for success. It's aiming to make the experience as fast and as responsive as that which you would have playing on a local PC, and to that end has sought to eliminate lag at every possible level – it is the result of seven years of research from its engineers.

Grid will be a staggered release, unsurprisingly coming first to North America (where the beta was) later this month using servers in California and Wisconsin. Most of Western Europe will gain access on December 02, via a Dublin-based server. However, German users will have to wait while Nvidia implements extra safeguards in line with Germany's strict age verification laws. For them, Nvidia is aiming for Q1 2015, with a German server also due to go live in early 2015, and more added worldwide as the service grows.

As mentioned, unlike Playstation Now, Grid and all of its games will be completely free at launch, and this will be the case until at least June 30, 2015. Of course, the caveat is that you'll first need a Shield device – Nvidia has no plans to bring it to other devices. The launch roster includes Batman: Arkham City, Race Driver: Grid (appropriately), and Street Fighter IV, with more to be added every month. For now, it's a single-player service, but multiplayer is being worked on too, and DLC packages can also be added.

Server side, Grid is powered by racks of Kepler-based Grid K340 and K520 GPUs. In the best conditions, Nvidia says performance per user should be roughly on par with a GTX 760, though as we understand it the resolution and graphics quality will vary by game and can also change on the fly to account for inconsistent connections, similar to what Netflix does. The key target is the 60fps one; delivering games at this frame rate is the priority. For the best experience, Nvidia recommends a 10Mbit connection or higher, as Grid needs a dedicated bandwidth of around 6.5Mbits. A built-in network test will give you an idea of how well-suited your connection is to Grid.

We were recently privy to a hands-on demo with Grid. The demo unit was given access to the Dublin EU server, which we were accessing from Reading. Overall, we came away impressed. For the vast majority of our demo, there was no detectable lag, even in a game as sensitive to this as Street Fighter IV. Now, we're no experts at this game (the CPU beat us, okay), but even so it was as responsive as we'd expect when playing locally. It wasn't perfect, however – there was the odd latency spike where the game would stutter for a fraction of a second. Nevertheless, considering controller commands are sent wirelessly to the Tablet, wirelessly again to the router, then to Dublin and back after processing, and finally to the TV, it's quite the achievement.

Of course, our brief experience should be taken with a pinch of salt. Nvidia was using a high-end router positioned close to the Shield Tablet, and the lack of public access means there's currently minimal load on the Dublin server. The proof is very much going to be in the pudding, and mileage will vary considerably between users based on numerous factors, many of which are outside of Nvidia's control: wireless strength, router quality, cabling quality, ISP traffic throttling and more. We should be back with more thorough impressions once the service is properly launched. 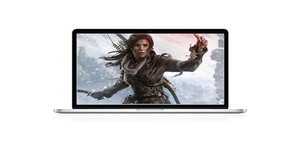 It's the Shield Tablet minus accessories.