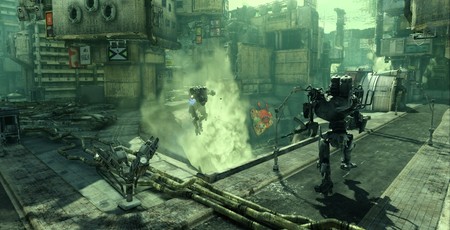 Multiplayer mech-based shooter Hawken is officially being put out to pasture, with developer Reloaded Games shutting down the PC servers and delisting the game from Steam from January next year.

Announced back in 2012, following numerous teasers, by Adhesive Games as an indie-developed, free-to-play title, Hawken was designed to fill a hole left by the at-the-time abandoned MechWarrior franchise. The game's promise proved enough for Meteor Entertainment, the corporation behind Adhesive Games, to pick up $10 million from venture capital investors, a sum which proved inadequate for Meteor Entertainment to keep running through 2014. The game was saved from the scrap heap by Reloaded Games in March 2015, which has been developing and maintaining the title since - but the company has now announced it is retiring the title to refocus on new projects.

'It’s been an incredible journey since the introduction of Hawken on Steam, back in 2014. The game’s success has been largely due to your continuous support. The Hawken community has been the cornerstone of this ever-evolving franchise,' the Hawken team at Reloaded Games explain in a Facebook post announcing an end-of-life plan for the game. 'After 3 great years, we are shutting down the PC Steam servers to refocus our development efforts. The PC game will officially be removed on January 2, 2018, and all DLC and purchasable content will also be unavailable starting today.

'It’s been an incredibly rewarding experience working alongside such a dedicated PC player base. Your feedback and support has been invaluable to us, and the team looks forward to creating more great games based on what we’ve learned from you.'

From today, then, the base game will remain listed on Steam, but any chargeable in-game content has already been removed - meaning nobody will be wasting any additional money on a game which is going away. The company has not indicated whether it has any plans to shut down the PlayStation 4 and Xbox One ports of the game in the immediate future.