Inxile Entertainment has confirmed that it is returning to crowdfunding for the third installment in the Wasteland franchise, and that this time it's looking to let players bring a friend along for the ride.

Launched following a successful Kickstarter campaign, Inxile's follow-up to the 1988 post-apocalyptic role-playing game that would directly inspire the Fallout franchise was described as a 'sturdy if unspectacular RPG' in our 2014 review. Used by many fans of the genre as a direct replacement for Van Buren, the isometric game cancelled by the closure of Black Isle Studio in favour of the first- and third-person shooter that was Bethesda's Fallout 3, the Wasteland series has a solid fanbase - and it's this group Inxile is targeting for its third entry in the franchise.

'You start the game as the sole survivor of Team November, a Ranger squad dispatched to the icy Colorado wastes. This is a land of buried secrets, lost technology, fearsome lunatics, and deadly factions,' Inxile's announcement to press, released late yesterday, reads. 'No one here has ever heard of the Desert Rangers. Your reputation is yours to build from scratch, and your choices may save this land or doom it. With a renewed focus on macro-reactivity, you’ll be picking between warring factions, deciding whether locations are destroyed or saved, and other far reaching decisions that have a marked impact on the shape of your world.'

While a shift from burning deserts to a colder environment is neat, there's a bigger reason for fans to be excited: Wasteland 3 is to be the first game in the series to features multiplayer functionality, allowing two players to run through the campaign. Using an asynchronous model, Inxile claims, it's possible for players to meet up for key story events while pursuing separate side quests which nevertheless affect the shared world, and for one player to continue even while the other is offline. 'Be aware, however,' the developer warns, 'that the actions you take while your friend is off-line are not without consequence!'

Inxile has confirmed that it plans to crowdfund the development of Wasteland 3, but that it will not be returning to Kickstarter. Instead, it plans to launch a campaign on rival site Fig with a goal of $2.75 million, with a view to release the game on Windows, macOS, Linux, PlayStation 4, and Xbox One. Interested parties can sign up for more information on the game's Fig campaign page. 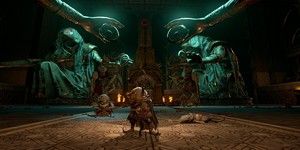