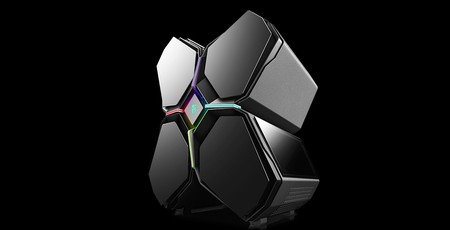 Case maker DeepCool has announced the launch of its latest design, and it's certainly refreshing for anyone bored of the utilitarian rectangular cuboids of the competition: the QuadStellar Smart Case, boasting smartphone app control of both lighting and 'active thermal control components'.

Designed with an eye to the needs of 'power rig builders', according to DeepCool, the QuadStellar looks for all the world like one of the Half-Life 2 City Scanners overdid the mince pies over the holidays. Its X-shaped layout, though, is claimed to offer more than aesthetics: DeepCool says the design has come about through 'heat dissipation simulation, physical prototype testing, and IR (infra-red) spectrograms to optimise heat dissipation and ventilation'.

Manufactured from cast aluminium, the QuadStellar supports E-ATX format motherboards in one compartment, up to three graphics cards in another, eight 3.5" and two 2.5" drive bays in a third in addition to a further three 2.5" bays elsewhere in the case, and the power supply in the last compartment. This, the company claims, offers each component the best possible ventilation, while those wishing to swap air cooling for liquid-cooling will find reserved areas for optional 'high-end separable water cooling accessories'. By default, though, the case comes with five TF120 fans: one at the rear and four at the front.

The control app, meanwhile, installs on the user's smartphone and allows the built-in programmable RGB lighting to be customised as well as manual control over fan speeds. Interestingly, the software also includes 'intelligent temperature control', which provides live monitoring of case temperature along with the ability to remotely open and close the four front air inlet covers - yet another feature seemingly borrowed from the design of the City Scanners.

More information on the case can be found on the official website, where DeepCool has set a US recommended retail price of $399.99 (around £295 excluding taxes). 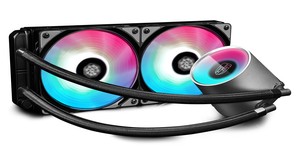 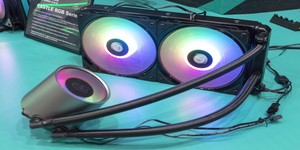