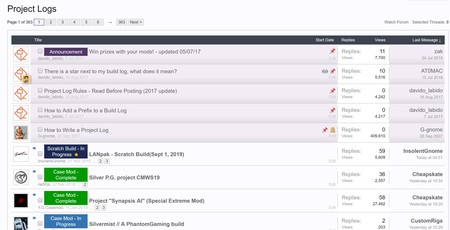 Ah, 2007, when Crysis was actually a hotly anticipated title rather than a meme, when Steve Jobs announced the iPhone, when Harry Potter and the Deathly Hallows was completed, and when Intel produced compelling products. Additionally, this was also when Peter Dickison wrote the last article on 'Zen and the art of the Project Log', an article which has served the community well ever since. However, I think it's fair to say that things have changed a lot over the last 12 years, so it makes sense to revisit this topic with a fresh pair of eyes.

One of the handy things is that the intrinsic values of the old guide are very much still relevant. It's a tutorial on how to present information clearly in a written format; if you're new to things here then I thoroughly suggest having a read through (the irony of the images being broken in the old article is not lost on me, and we're working on it! - ed.), not least because it's a fun look at the history of bit-tech. I'm going to keep the new one more concise where I can, and hopefully it will prove a handy resource!

First up, why would you even need a log to begin with when you can just post up some final pictures? Well, there are a few reasons:

Project logs in general are a fantastic way of sharing knowledge and experience. They show the process behind a venture, the discoveries, the hardships, and the triumphs. They also generate discussion and community, especially ongoing logs where others have the chance to get involved. Feedback from the community can foster amazing ideas or present opportunities that perhaps you hadn't considered before; I can think of several such occasions in my own builds where a suggestion flew in from somebody that I never would have considered before.

How do I write one?

With the groundwork for why you should have one laid out, how about actually writing one? I'm tailoring this one specifically for the bit-tech forums, but the principles generally hold true for other places and formats too.

Show us your social!

We recently made changes to our Mod of the Month format to be more in line with how things actually are nowadays, and that includes acknowledging the importance of social media. If you don't use social media for modding, fear not as it's not required! If you do have social accounts, though, we would love to see them so that they can be linked to!

Please, please, please post a parts list - at the very least in your final completion post! I know that often the parts themselves might not be all that important for a mod (it could be a niche media PC, a retro build, a spare parts concoction, etc.), but it's still handy information and doesn't take long. We also add the parts lists to the Mod of the Month videos each month, so it helps to prevent errors in identifying parts that may be hidden out of view and so on.
A great way of doing this is by constructing a build page on a site like PCPartPicker or Builds.gg. I'll straight up say that for older hardware these sites are a pain, but they do at least allow custom parts to be added, so if your mod is a bit left-of-field, fear not. If you plan to post up to Facebook or Reddit, having a parts list on one of these two is definitely a good idea - invariably, folks will ask for one!

This is a bit-tech-specific part, but definitely remember to correctly label your thread! When creating your project log post, you have the option of choosing a label for your thread. Don't forget, though, you can also edit your post later on to show that your build is complete! This is important, as the labels are used to sort through for Mod of the Month and the Modding Update; if your finished build isn't labelled as such, you may easily be missed, and we don't want that!

This point is just as relevant now as it was back in 2007, largely because even phones now produce "OMGHUGE" photos. Thankfully, however, the graces of modern technology permit a better format than the ol' 640 x 480. Gigantic pictures can slow down threads a lot, put strain on the servers, and aren't so friendly for those on slower connections. When uploading pictures to the forum, try to stick to below 1MB in size (until recently, this was a hard limit in the uploader) and 1,920px wide. If you're uploading directly to bit, you can upload in that size and use a mid-sized thumbnail in your thread. If you haven't got access to photo editing software, many websites offer resizing such as BeFunky, BIRME, and Online Image Resize. Alternatively, there are a host of apps on the various mobile stores. We'll visit photos again further down.

We've established the main requirements, but it's also important to ensure your log is actually worth reading. Again, things have moved on since 2007, but many of the principles remain the same or similar.

It used to be a rather nebulous rule on the forum that one needed to have begun "modding" to have a log. Unfortunately, it just lead to people posting up a picture of some wood with a hole in it or just not posting at all for fear of having the thread moved. In my book, progress means that you've begun at a meaningful checkpoint in the project. This could be parts arriving, finalising sections of the design, beginning construction - it's up to you. I call it a best practice, though, because people get bored of content that's seen to be bland, by which I mean content that isn't specific to your project. If you begin with a picture of a sponsored power supply and nothing else, what does that mean? Would somebody else find that compelling?

The easiest way to turn myself and many others off a project log is incessant teasing. I make an exception here for final photos, as sometimes you just want to alert people that the project is complete and then post up the proper photos when you've had time to give them some attention. Posts along the lines of, 'Oh, look at this...' followed by a dark image of something nobody can make out simply don't work outside of social media. Keep it to Instagram and Facebook, please; we like our meaty content here!

A project log is a journey, so little day-to-day updates are very much part of it. If you've done a little job for the project, please do share it with us; it's all part of the experience and encourages feedback. There's a reason why YouTube channels will usually have an Instagram and Facebook page for quick updates and community interaction; it's good fun to keep up to date with ongoing projects. This extends to hobby projects, too; a work-in-progress mod is just that: progress!

Earlier we looked at the technical aspects of the photos, but what should you actually be posting? I'd like to do a proper photography guide in the future here, as it's a very broad topic, much too in-depth for an abridged guide like this one. We can, however, outline some good points to consider:

On the subject of modernising things, videos are a great tool for showing progress. If you happen to have a YouTube channel of your own and video things, please do link to the videos in your logs! As with the social links above, it's great to link together different platforms, and video can be brilliant for showing things like lighting effects or animated elements. Even if doing a full-on video log isn't your thing (trust me, it's not for everybody), the format is definitely the best way to display progress that may otherwise require quite the bank of images.

Interact with questions and comments

This one can be a little tough, sadly, as sometimes a log simply won't gather all that much attention while it's going on. That said, fostering the community side of things is important, as it brings people in. Responding to feedback sets up a dialogue and makes it more likely for that commenter to hang around. This is a pretty universal point and holds true on other platforms as much as on the forums here. It's nice when somebody acknowledges you.

Interact with other logs

This is directly linked to the other point about replying to feedback. Be sure to browse other people's logs and get involved. It's a game of give and take; posters known to be members of a community will always end up being more popular with their content. Community is about getting to know folks; reach out and who knows, you may get more out of it than you first expected. It goes without saying, though, that interacting with other threads does not mean posting yours in there unless prompted, nor does it mean being rude if you don't like a particular project. We refer to this on the forums as the "Don't be a arse" rule, it should be fairly self explanatory.

Pop over to the Discord and say hi!

Okay, this isn't strictly a project log requirement, but sometimes you just don't want to faff about with posting up to a thread when you've finished something cool. We'd love to see in-progress pictures and albums over on the bit-tech Discord. Don't forget to pop any pictures into your log later on, though! 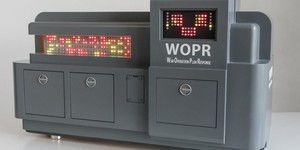 Mod of the Month September 2019 in Association with Corsair 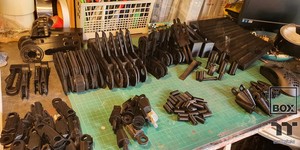 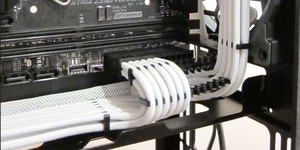