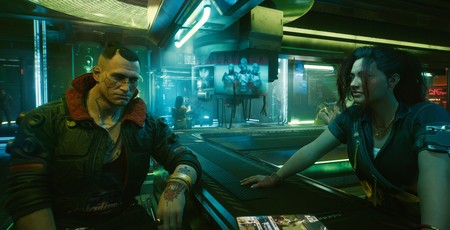 You may have not noticed given how quiet everybody’s been about it, but Cyberpunk 2077 released yesterday. Since I only received code a smidge before the actual launch, I’m still working my way through the early stages of V’s adventure through Night City. But the game has already made a big impression on me, in both good and less good ways. So here are my initial thoughts on the first eight or so hours with CD Projekt’s massively anticipated title. 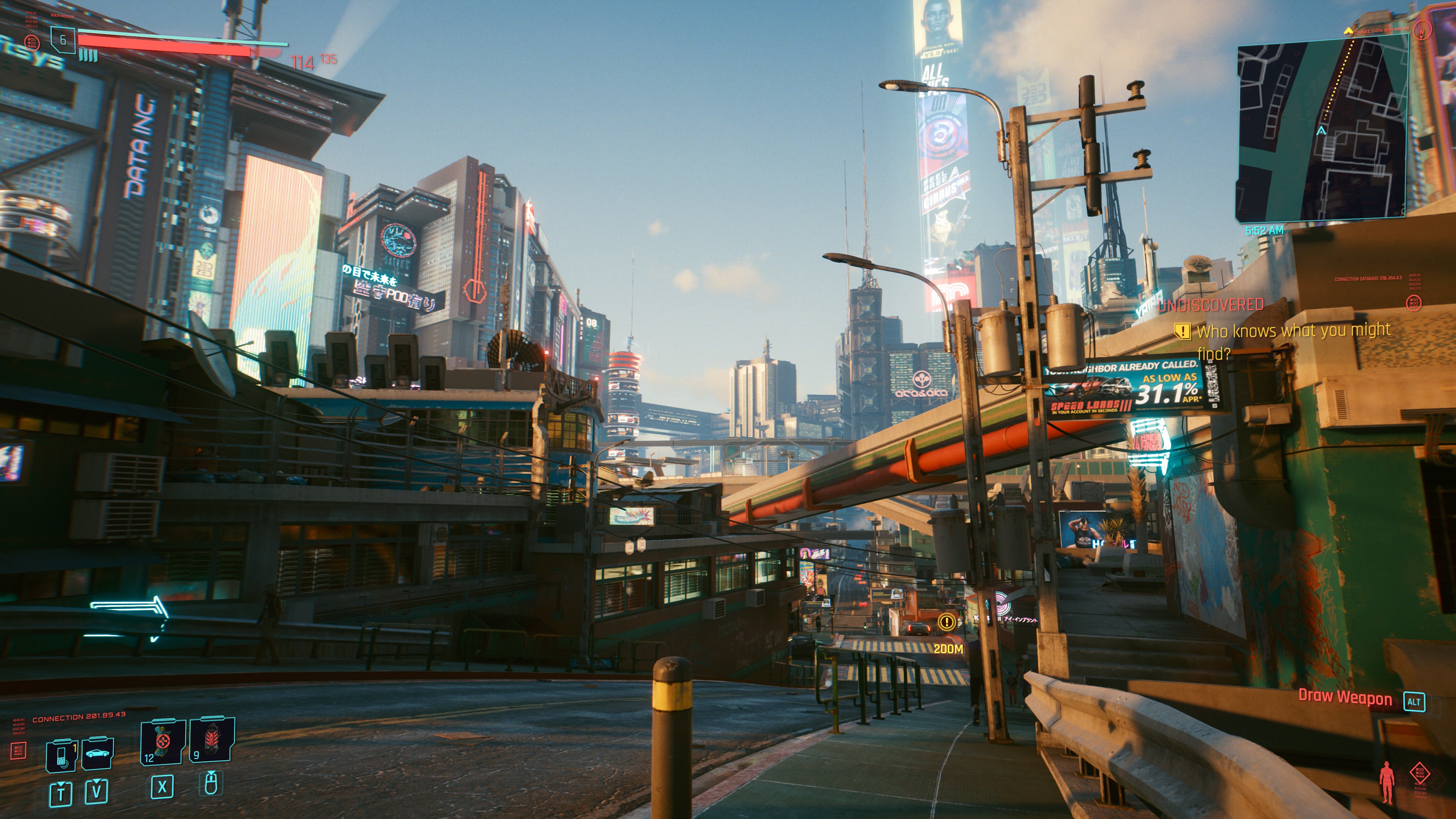 Night City is a place you want to walk around
Night City is a spellbinding example of virtual architecture. As well as being absolutely massive, it's also highly dense and multi-layered, with tightly packed buildings and hundreds of back-alleys, elevated walkways and subterranean paths. It’s also absolutely crammed with detail, from the explosion of billboards and signage to the abundance of food sold by street vendors.
Although you’re free to drive around Night City, during these early stages I found myself actively avoiding using vehicles, so I could wander the streets and drink in the palpable atmosphere of the place. Wandering around on foot also provides a much greater sense of the city’s ludicrous scale. From a visual and architectural perspective, Night City is truly next generational. 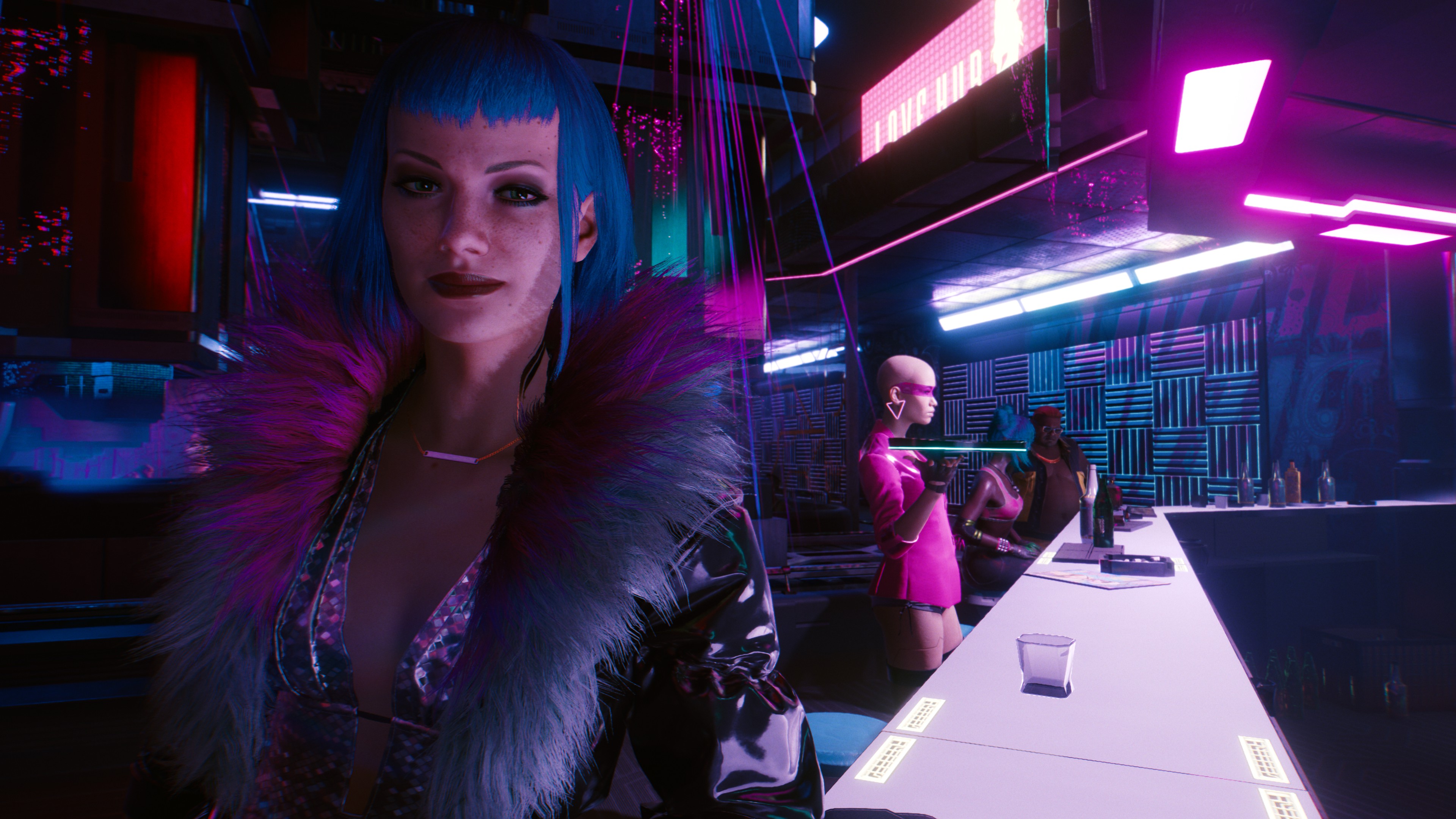 It’s less obnoxious than I expected
In the lead-up to release, Cyberpunk’s marketing actively put me off the game, deliberately focusing on its edgiest and most obnoxious elements. It made me worry the final experience would be an onslaught of dumb future slang, awkwardly portrayed sex, and adolescent cynicism and misanthropy.
While there are elements of this,so far the more egregious elements have been consigned to the background. The main story has been largely thoughtful and engaging. One of your closest companions in the early games is Jackie Welles, who very quickly reveals a warm and affable personality behind his intimidating appearance. The game quickly establishes a strong and intimate bond himself and V (who is also surprisingly empathetic), and I actively look forward to missions involving him. 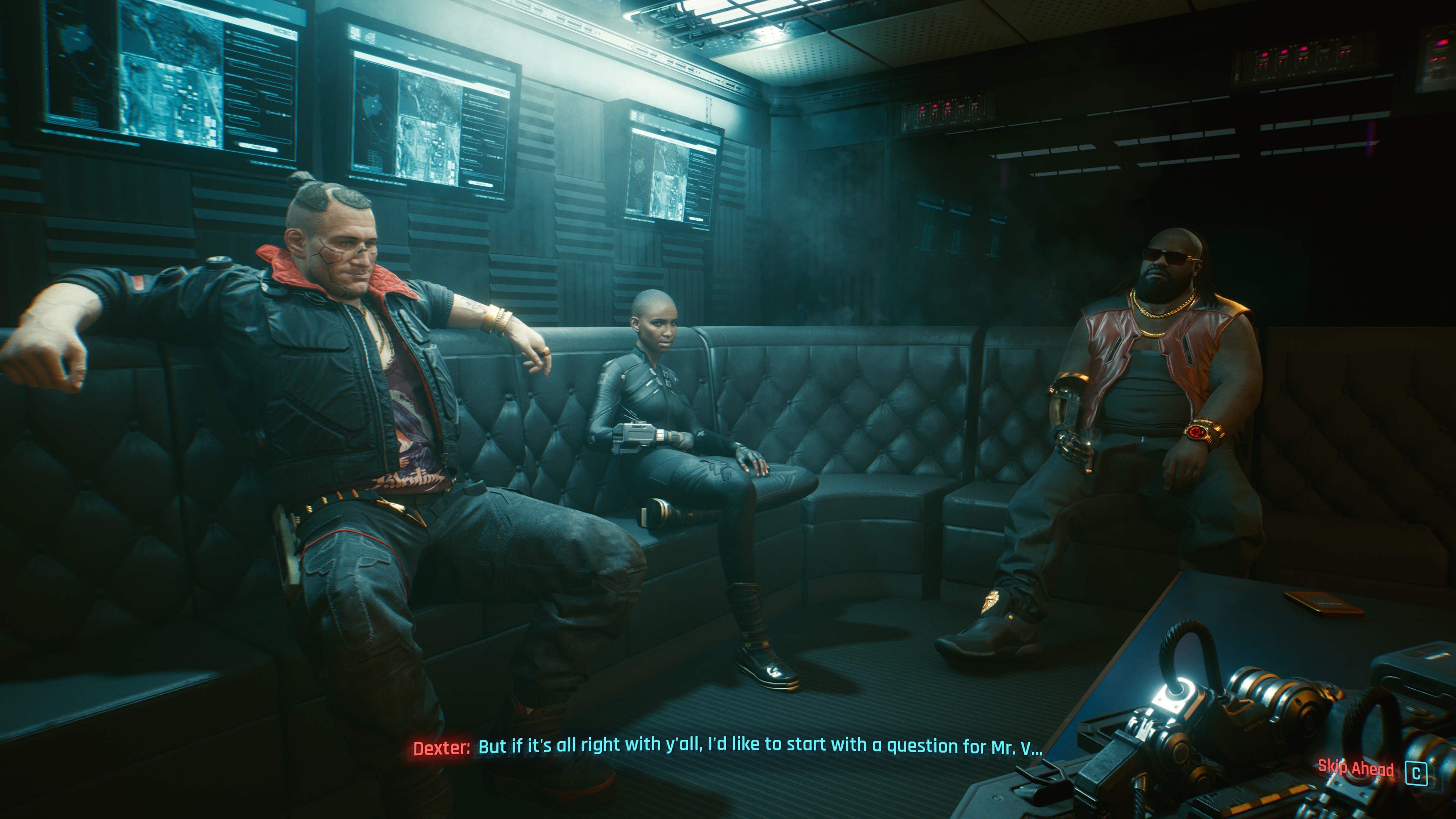 Story and quests flow superbly
There are very seams between open-world exploration and questing. The whole game so far has taken place in first-person, never pulling away from V’s perspective, even when switching from active play into a cutscene. Dialogue options, meanwhile, dynamically appear when you approach a relevant character, with no jump into a dialogue sequence as you’d see in The Witcher 3 or Assassin’s Creed Valhalla. Even moments when the game needs to skip forward are cleverly approached, with edits masked by an artificial “glitching” of the screen. CD Projekt is dedicated to immersing you in Cyberpunk’s world, and so far, it works. 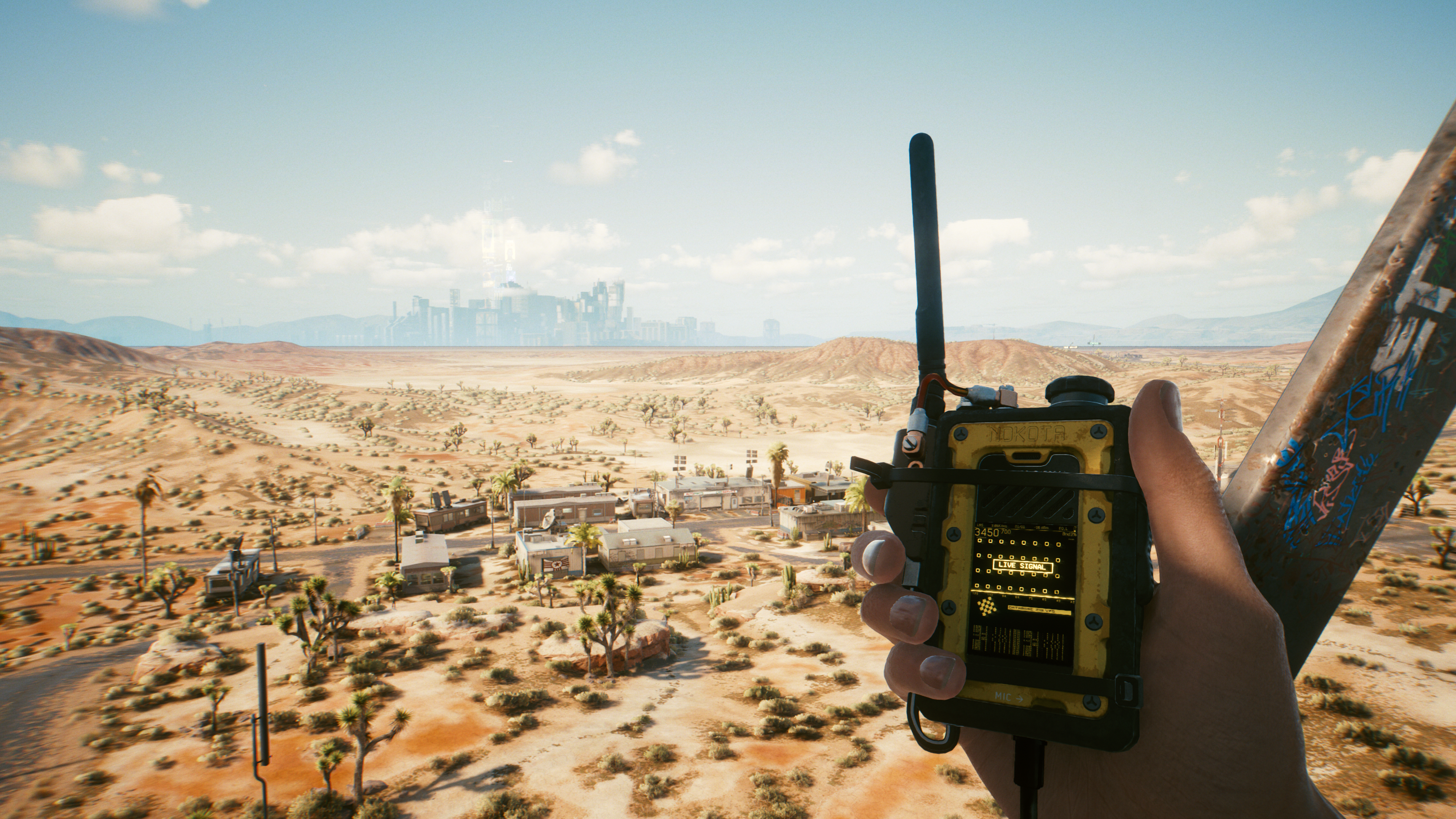 The intro mission was shorter than I expected.
When creating your character, Cyberpunk lets you choose from three “backgrounds”, namely Corpo, Street Kid, and Nomad. Each of these start the game in a different place, with a different introductory mission. I opted for Nomad, as it starts you as an outsider from Night City living in the Badlands, and this seemed the most appropriate way to introduce myself to the game.
For some reason I expected the Nomad intro to go deep on Nomad culture, exploring the Badlands and walking you through the basics of the game before the story begins proper. But it doesn’t. In fact, it comprises a very brief mission that sees you and Jackie Welles running contraband through a Night City checkpoint. Don’t get me wrong, it’s well crafted and does some entertaining scene setting. I just expected more grading into the Nomad way of life before hitting Night City proper. This also leads me onto my next point. 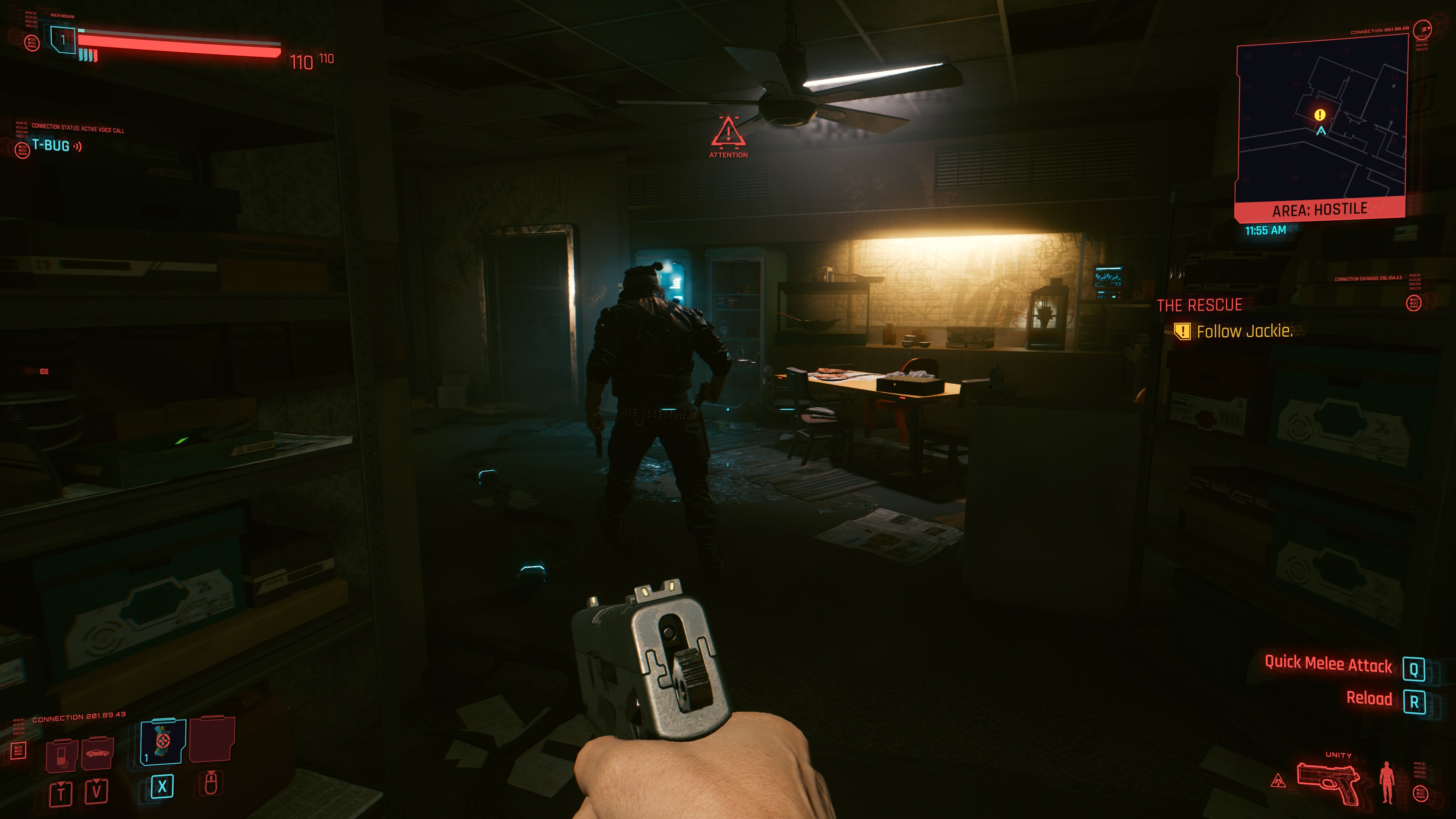 It throws a lot at you very quickly
Cyberpunk’s approach to onboarding is very much learning on the job. After the opening mission, there’s a montage scene where you and Jackie become acquainted with Night City, partying, running jobs, getting into fights and so forth. After this, you then embark on a second introductory mission involving rescuing a woman from an apartment.
The game then “teaches” you its entire gameplay loop through four (optional) VR tutorials. Stealth, shooting, hacking, and melee combat. None of it will be alien to anyone’s who’s played games like Far Cry or Deus Ex, but still, it’s a lot to take in at once. On top of this, there’s a massive skill and abilities tree, which isn’t particularly well explained. I’m currently edging toward a stealth/hacking build with a side of small arms and blades, but I’ve no idea whether this is a good idea or not.
Speaking of which... 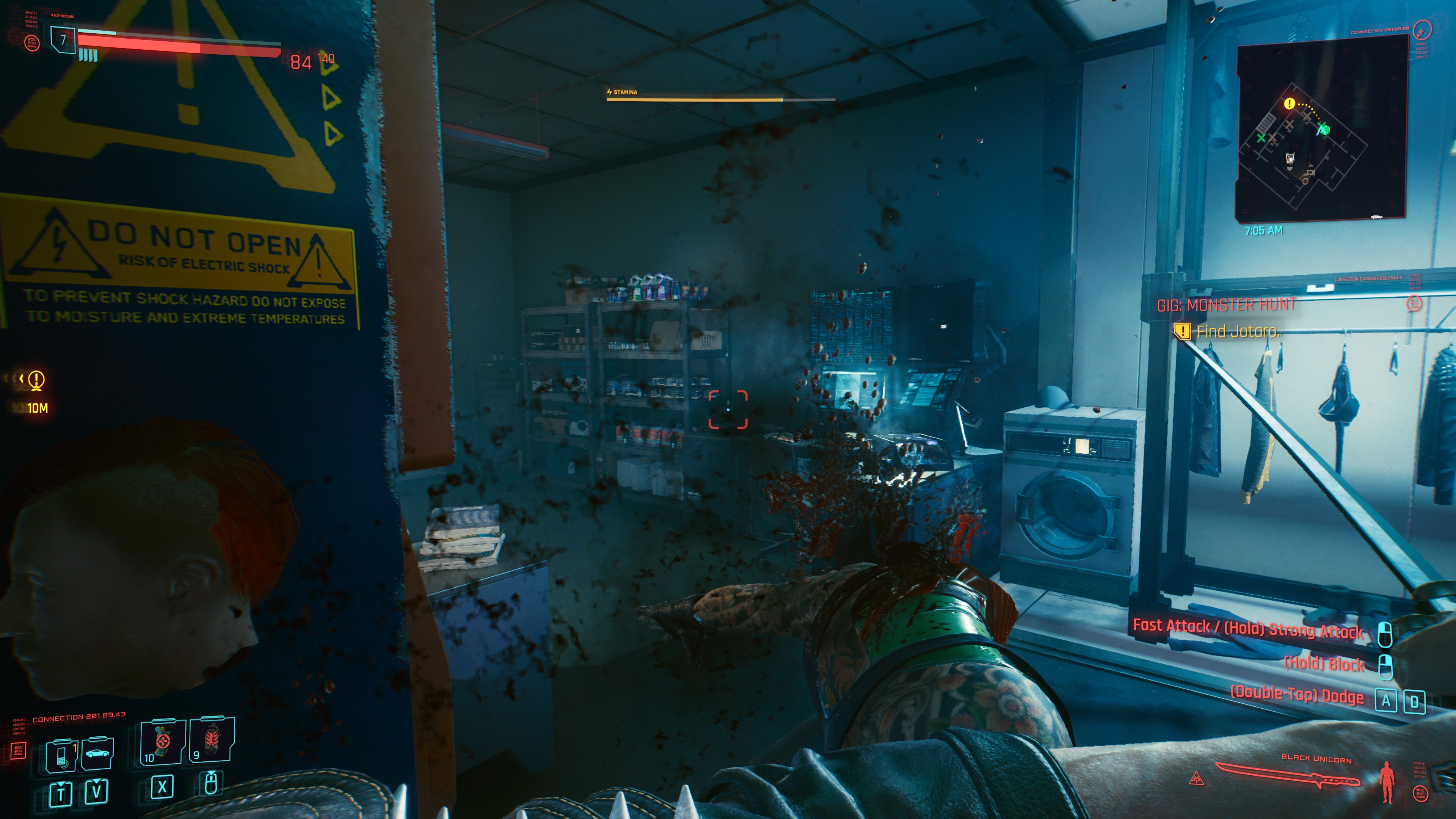 I’m not feeling the systems yet
When you’re not exploring or involved in story sequences, Cyberpunk basically plays like a Deus Ex game, with a mixture of shooting, hacking and sneaking that’s very similar to the Ion Storm classic. Sadly, so far I’m not enjoying this element as much. It could well be the lack of a proper onboarding mission a-la Deus Ex’s superb Liberty Island, but I’m finding stealth to be more trouble than its worth, and the shooting to be chaotic and rote. The quickhacks system is particularly hard to engage with. By the time I’ve figured out which quickhack I want to perform, enemies have spotted me and the mission has devolved into a big gunfight. I do like the swords, however. Running up to an enemy and slicing their head off is very satisfying. 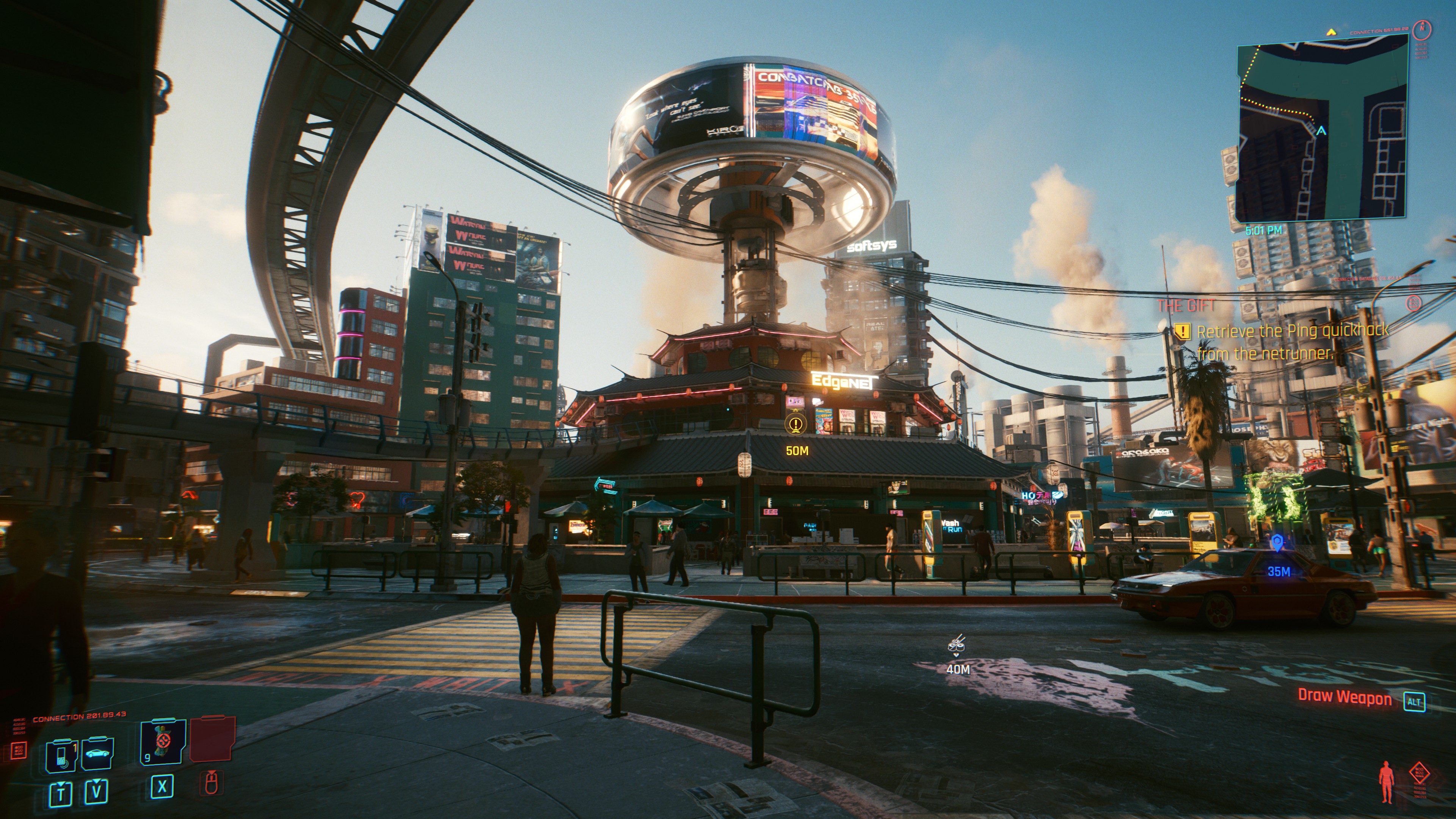 There’s way too much loot
Cyberpunk has a very Bioshock Infinite approach to loot, which is “Just Chuck Stuff Everywhere”. I’m only a few hours into the game and already my inventory is loaded with guns, grenades, clothing, and junk. I don’t know what half of this does, and the other half I don’t care about. Missions and environments are just littered with stuff, to the point where it distracts from what you’re supposed to be doing. 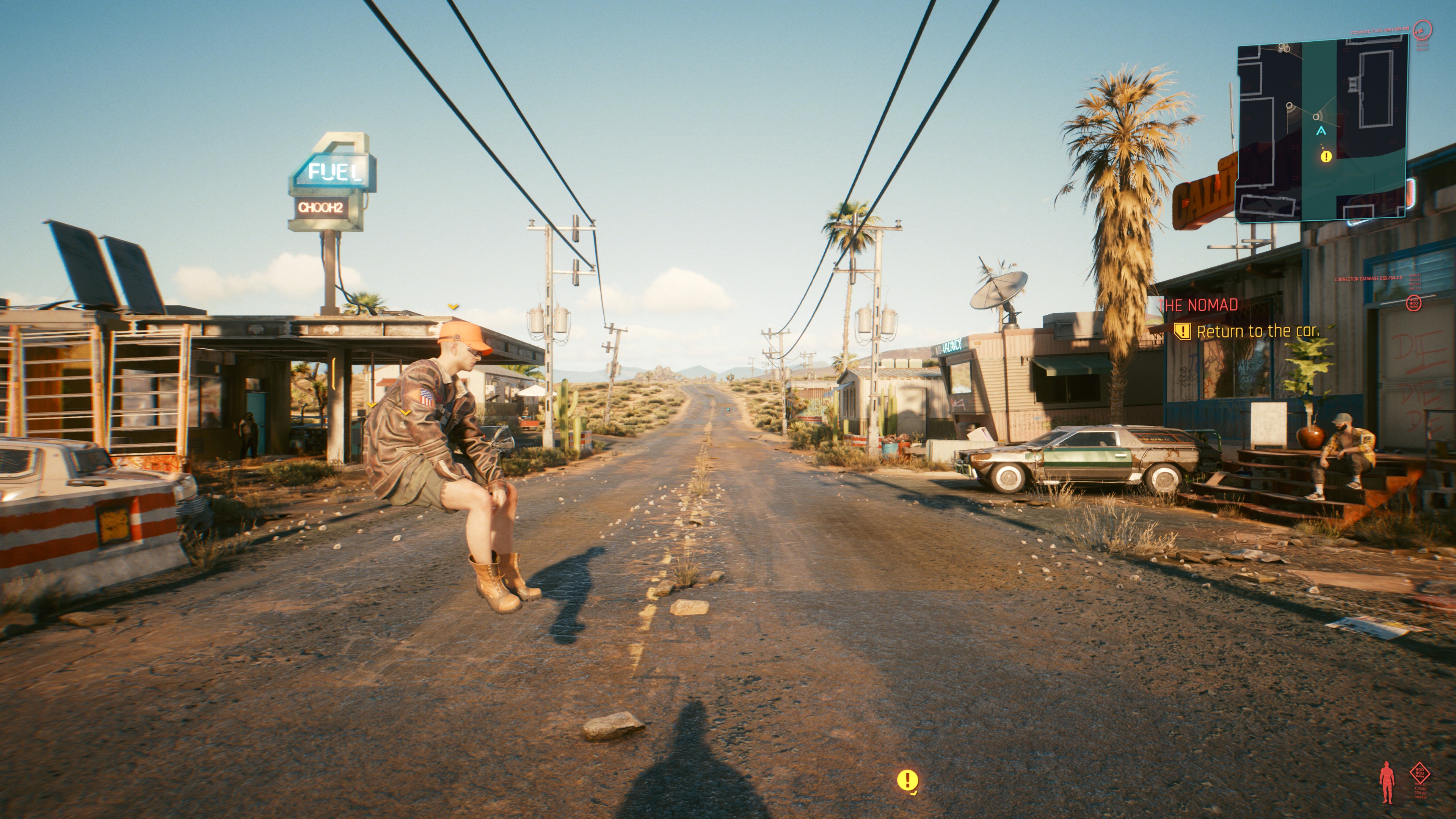 I haven’t encountered too many bugs, but there are performance issues
You’ve probably heard from multiple sources that Cyberpunk is buggy. In my own playthrough, I seem to have got away with this. The only major bug I’ve seen happened right at the start of the game, where an NPC was floating in the air in the middle of the road.
Yet while I’ve got away with bugs, performance is a different matter. CD Projekt recommends a 2080 Super for playing at 4k res, but speaking as an owner of such as card, I’d say this is optimistic. I had to do some serious fiddling with the settings to get a relatively stable framerate (top tip, set distant shadows to “low”). Even now, the framerate can fluctuate wildly depending on what’s on screen. For some reason, I get massive frame hitches during cutscenes. Sometimes pausing the game will rectify this, but other times it won’t.
Overall, I’m enjoying my time with Cyberpunk, but there are definitely issues, and I sincerely hope the more “immersive sim” side of the game improves as it goes. I’ll be back with a full review after the weekend.