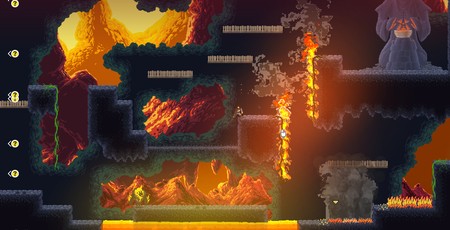 I have to be honest, a stealth game in which one of the core mechanics is the ability to set fire to everything doesn’t seem like the best idea. Admittedly, beyond trying to get to the bathroom at night without waking up my daughter and/or partner, I haven’t done much sneaking in my life. But on those rare occasions where toes have been tipped, never once have I thought “Maybe this would go easier if I torched the house.” If you’re now expecting me to turn around and say “But in Wildfire this idea works really well!” then I’m sorry to disappoint. Most games that fail do so because they’re a good idea executed badly. But Wildfire is different. It’s a fundamentally terrible idea that’s executed about as well as you could hope for. It’s stylish, it’s interesting, and it is intermittently enjoyable. But there’s no escaping the fundamental conflict at the heart of Wildfire which it never succeeds in reconciling.

Set in a flatpack fantasy land, Wildfire puts you in the role of a nascent witch whose village is attacked by zealous Inquisition types. Your village is torched and you are burned at the stake, but you survive, and in the process gain the ability to manipulate fire. Venturing out into the wilderness, you embark on a quest to rescue your fellow villagers from the clutches of your enemy. The game plays like a hybrid of Mark of the Ninja and Abe’s Oddyssey. You sneak through levels by avoiding enemy patrols, hiding in bushes, and moving carefully so as not to make too much noise. Your end goal for each level is to locate the exit, although many levels require you to also rescue at least one villager, who follow you around much like Abe’s Mudokon buddies. You can command them to follow you or stop with a whistle, carry them on your back and, amusingly, throw them across gaps too large for them to jump themselves.

These basic mechanics all work fine. But Wildfire then adds elemental abilities on top, starting with fire. By pressing right-mouse, you can transfer any flame in the game world into your hand, then chuck it as a bouncing fireball. Anything flammable (mainly foliage or wooden objects) will catch alight, spreading that fire to any adjacent flammable objects. As you can probably imagine, this can result in some spectacular chain reactions. But there’s a theoretically practical purpose to your wanton arson. Like skittish horses, guards “panic” when they see fire, running away and losing all sense of perception, giving you an opportunity to slip past unnoticed  - you can withstand a short amount of time engulfed in flame.

At least, that’s the theory. More often, what happens is your spark will set half the level alight, and in trying to parse where exactly is safe for you to move to, you’ll be cornered by a guard and hacked to death. I get what Wildfire is trying to do here. Using fire as a distraction technique is potentially very cool, and the results can be hilarious. Guards will often run straight off the edge of a platform to get away from the flames, sometimes plummeting to their deaths. The problem is that Wildfire often feels like it’s punishing you for using the abilities it gives you. Setting fire to a bush, for example, burns away your hiding place, while holding any object in your hands prevents you from hiding at all. Consequently, it’s often easier, safer, and more controllable to simply whistle while in cover to attract a guard, and then slip by them while they’re examining the area you just left. What doesn’t help is that Wildfire’s stealth systems are not especially readable, judging how perceptive guards are is difficult, and because it’s a side-scrolling game, it’s very easy to run into guards you simply didn’t know were there as the game does let you scan environments with the mouse, but it’s easy to forget about in all the chaos.

I should point out that, despite being founded on a contradictory premise, Wildfire isn’t a disaster. The presentation of the game is superb. I’m not a big pixel-art fan, but Wildfire’s is lovely, bursting with colour and granular in its detail. The game also feels gratifying to play, thanks to detailed animations and crunchy audio design. Everything from mantling objects to chucking fireballs feels good under the fingers. I also admire the game’s attempt to mix-up level objectives, although I think this ultimately undermines the game’s overall goal. Levels are roughly divided between open-ish environments where you need to locate the exit or rescue villagers, and more puzzle-centric missions, such as getting to a group of villagers before a long fuse blows them to smithereens, or leading an aggressive fire demon through a mine filled with guards to destroy an obstacle. There are some neat concepts here, but they also restrict your ability to experiment with the game’s systems. I think the game would benefit from having fewer, but larger levels with lots of different routes through them that give you lots of options to deploy your abilities.

Wildfire does offer powers beyond simply setting things on fire…eventually. Later on, you gain access to water- and earth-based abilities, which let you do things like float in a bubble to higher platforms and create vine-based pathways. Your fire-based abilities also expand too, including turning your fireball into a smoke-bomb that can temporarily blind enemies. At this point, Wildfire begins to feel much more closely aligned to the im-sim games it’s clearly inspired by, primarily Thief and Dishonored. But some of these tools (especially the smoke bomb) should be made available much sooner than they are, to give you a basic range of options for dealing with scenarios. Ultimately, the contradiction at the heart of Wildfire results in a struggle over how much power and control the player should be given. Depending on where you are in the game, it veers between feeling too restrictive and too unpredictable, unsure of whether it’s a stealth-puzzler or an immersive sim. There are sparks of fun to be had within its burning mass of ideas and mechanics, but ultimately, the fire peters out once too often to be worth the warmth that it can sometimes provide.