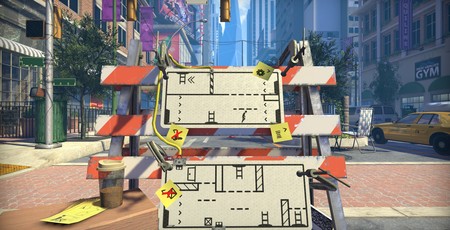 I don’t think a game ever interpreted the term “puzzle-platformer” quite so literally as the Pedestrian. The individual “levels” in this delightful little creation don’t just contain puzzles, they are puzzles. Press F at any moment while playing the Pedestrian, and the game suddenly switches from a fairly standard jumping game into a dynamic jigsaw puzzle, letting you move the individual pieces of that particular stage around, pulling them apart, shuffling them around them, and connecting them back together. It’s a mechanical gimmick that instantly draws you in, like Superliminal’s perspective puzzling, or Portal’s portals. Of course, the risk with such gimmickry is that the game becomes over-reliant on it or runs out of ideas too quickly. If anything, The Pedestrian has the opposite problem, and could probably give the many ideas it has greater room to breathe.

That’s not to say it’s a bad game. Not at all. You assume control of the little human silhouettes often seen on Pedestrian crossings or bathroom doors (by which I mean regular, normal public bathrooms, not the kind you’ll see in a hipster café where the figures are riding penny-farthings or something). Choosing either a male or female pedestrian, you must guide your symbolic abstraction through the signs, diagrams, and other visual aids of a bustling city centre. You’ll hop across blueprints, post-it-notes, road-signs, and even traffic lights. As I mentioned, there are two separate layers to the Pedestrian’s puzzling. The first is found inside each individual sign. Here, the Pedestrian is a familiar platform game. There are ledges to jump across, boxes to push, and even lasers and Super Meat Boy-style saw-blades to avoid. You can also transition between different signs by passing through doors and climbing/descending ladders. How all these things got into the signage of a standard urban centre, I don’t know. “Lasers” generally aren’t included alongside speed limits and one-way-systems as things people in cities need to worry about. But given we’ve already accepted the idea of a sentient silhouette, it’s probably best to go with it.

Anyway, so far, so Pedestrian. On top of this, however, is the jigsaw-puzzle layer that I already mentioned. Frequently, you’ll encounter a cluster of signs or diagrams that need to be arranged in a certain way so that you Pedestrian can traverse through them. Specifically, you need to connect doors and ladders together to create a viable path. But there’s often more than one set of doors and ladders that can be connected. Also, once you’ve made a connection, you’re not allowed to change it without resetting the puzzle. From here, The Pedestrian quickly evolves from a straightforward platformer into a surprisingly brain-teasing puzzler. Figuring out the right arrangement seems simple at first, but the game is constantly iterating upon that central concept, adding new puzzle elements that increase the challenge. For example, toward the middle of the game, it adds electrical plugs that be connected inside the signs to form power circuits. A little later, it then introduces puzzles where the signs themselves must be arranged to complete electrical circuits, meaning you have to think on two layers at the same time.

The Pedestrian also excels at playing with its own ruleset. Remember when I said that changing an existing connection resets the puzzle? Well, it only resets what’s inside the actual signs. Puzzling elements outside the signs remain as they are. Hence, sometimes you need to deliberately reset the puzzle to proceed. Toward the end of the game, it also enables you to alter individual signboards so that they don’t reset when a connection is changed. You might think this would make the game easier, but these form some of the most challenging puzzles in the game, as you need to figure out which signs need to be reset and which don’t at the appropriate points in the puzzle. It’s a clever game, but it’s also beautifully presented. There’s no story as such in the Pedestrian, but there is an arc to the journey. The whole game plays in a single, continuous take, with the camera panning between different areas as your Pedestrian transitions from one sign to the next. For example, you start off in some kind of workshop, and need to work your way through the blueprints and hazard signs to a lift that takes you down into a subway. From there, you work your way through the tunnels to a train that transports you outside.

It’s not just the concept that impresses either. The 3D backdrops are gloriously detailed. You’ll often find yourself pausing to admire little details in them, such as the daft billboards and signs for shops (saucy bacon, anyone?). The music is bright and upbeat, bringing to mind other charming-by-design games like Trine and The Sims. Mainly though, I thought the Pedestrian most reminiscent of games like Puddle and Gorogoa, wherein it takes a simple puzzling concept, then sees how many variations upon that theme it can include while still giving you the sense of a continuous adventure. There are a couple of small issues. Ironically, for a game that is largely about signposts, it doesn’t always communicate new mechanics too effectively. For example, using the puzzle reset to solve the puzzle is something you must figure out for yourself. In fact, the Pedestrian doesn’t explicate that changing signpost connections will reset the puzzle in the first place. This led to me being stuck on a couple of puzzles because I wasn’t aware of what the rules were.

The Pedestrian is also rather short, lasting between three and five hours. I like the game fine as it is, but there’s enough going on in it that it could justify being a little bit longer. Oh, and one last small issue is that the music doesn’t loop, meaning that if you spend longer than expected on a puzzle, it cuts out, leaving you with just the ambient noise. Not only does this feel a bit odd, it gives the sense that the game is impatiently waiting for you, glancing at its watch and tapping its foot while you’re figuring out how to turn the lift on. All that said, this a finely crafted puzzle game. It looks great. Its concept is creative and enjoyably played with throughout, and it’s more challenging than you might expect. As far as we’re concerned, the Pedestrian is green for go.