bit-tech - At the moment, your highest wattage model sits at 450W. This is enough to power most typical single GPU high-end gaming systems, but are there any plans to increase the wattage, say to 500 or 600W?

Tony Ou - Our current flagship ST45SF-G can already power very impressive rigs installed with second or third best cards from NVIDIA or AMD. I don’t think most people realize how difficult it is to put so much power into a diminutive SFX housing. To give you a good perspective, our ST85F-GS 850W PSU, one of the smallest, fully featured (80 PLUS Gold, 100% modular cables) ATX models on the market has 438W per litre (total PSU wattage divided by its size in litres). The 450W ST45SF-G is the first fully modular SFX PSU - Click to enlarge
This is pretty impressive considering that most PSUs with the same features and power level are around 280W to 350W per litre, but it still pales in comparison to our current flagship SFX PSU, the ST45SF-G, which has 570W per litre. In a couple of months though, we will be releasing a new 1500W PSU that fits into a relatively compact ATX housing with a depth of only 180mm (many 750W to 1000W are about the same size) and this means that it will finally beat the current SFX champ with a power density of 647W per litre. The SST-SX600-G - the first 600W SFX PSU, which could conceivably power SLI and CrossFire systems - Click to enlarge
So this means that if we were to make a more powerful SFX PSU up to 500W without any increase in PSU casing size, we’d have to design a unit with power density that rivals a top of the line ATX PSU (a 500W SFX would have power density of 634W per litre). This is server-level 1U-type PSU density we are talking about here! With that said, we have already finalized the design on an incredible 600W SFX PSU that we plan on releasing in the second half of this year with a power density of 759W per litre!

bit-tech - Do you have any other plans for future SFX PSUs?

Tony Ou - Our plan for the SFX PSUs in the near future is to offer as many models as we can, just as we have done with our ATX PSU lineup. There will be different wattage levels (by the end of the year, we will have SFX PSUs from 300W up to 600W), features (modular, non-modular), efficiency levels (different 80 PLUS certifications), and prices (from around £35 and up).

Besides standard SFX form factor PSUs, we’ve also announced at a SilverStone event last month in Japan a variant form factor that we’ve named, 'SFX-L'. This is basically a longer or deeper SFX PSU that is designed to hold a 120mm fan. SilverStone's 500W SFX-L PSU uses a quiet 120mm fan but is still as slim as an SFX PSU, if a little longer - Click to enlarge
It will have the same mounting holes as a standard SFX, but because of its added depth, some SFX cases may not fit (necessitating a new name for differentiation) so it will be more of an in-between solution for those who like to downsize to smaller cases/PSUs but aren’t willing accept the 80mm fan limitation in a standard SFX PSU.

As you can see, we already have a lot planned and are very committed in growing the SFX PSU market and believe it will eventually become popular just as Mini-ITX has now become a mainstream form factor among ATX and Micro-ATX motherboards. Speaking of Mini-ITX in the mainstream, don’t forget that we were the first company to sell a Mini-ITX case designed to hold high end, double slot graphics card back in 2009 with the aforementioned SG05 case.

The effort we put in to promote that case in a time when there were nearly no Mini-ITX boards with PCI-E slots, and subsequent case/PSU releases afterwards, helped to grow Mini-ITX into what we see today. So we definitely have a proven track record at leading a form factor/standard into the mainstream and I am optimistic that we will do the same for SFX!

We'd like to thank Tony for speaking to us and if you have any thoughts on SFX PSUs do let us know in the comments. 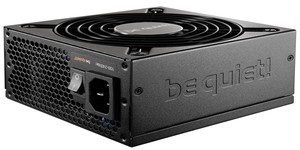 The SFX-L form factor is great for small form factor fans - how does Be Quiet!'s latest fare?