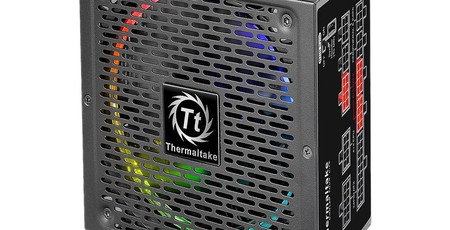 Introduced at Computex 2018 at one of the most RGB-laden booths we’ve ever seen, the Toughpower Grand RGB Gold (RGB Sync Edition) power supply is available in 650W, 750W, and 850W capacities. Each unit comes with 80 Plus Gold certification, and you may have guessed from the repeated use of ‘RGB’ in the name that it also comes with RGB lighting, specifically on the fan. At this point in Thermaltake’s product portfolio, the question of whether something needs RGB lighting is a distant memory. Everything apparently does, and so everything apparently will. 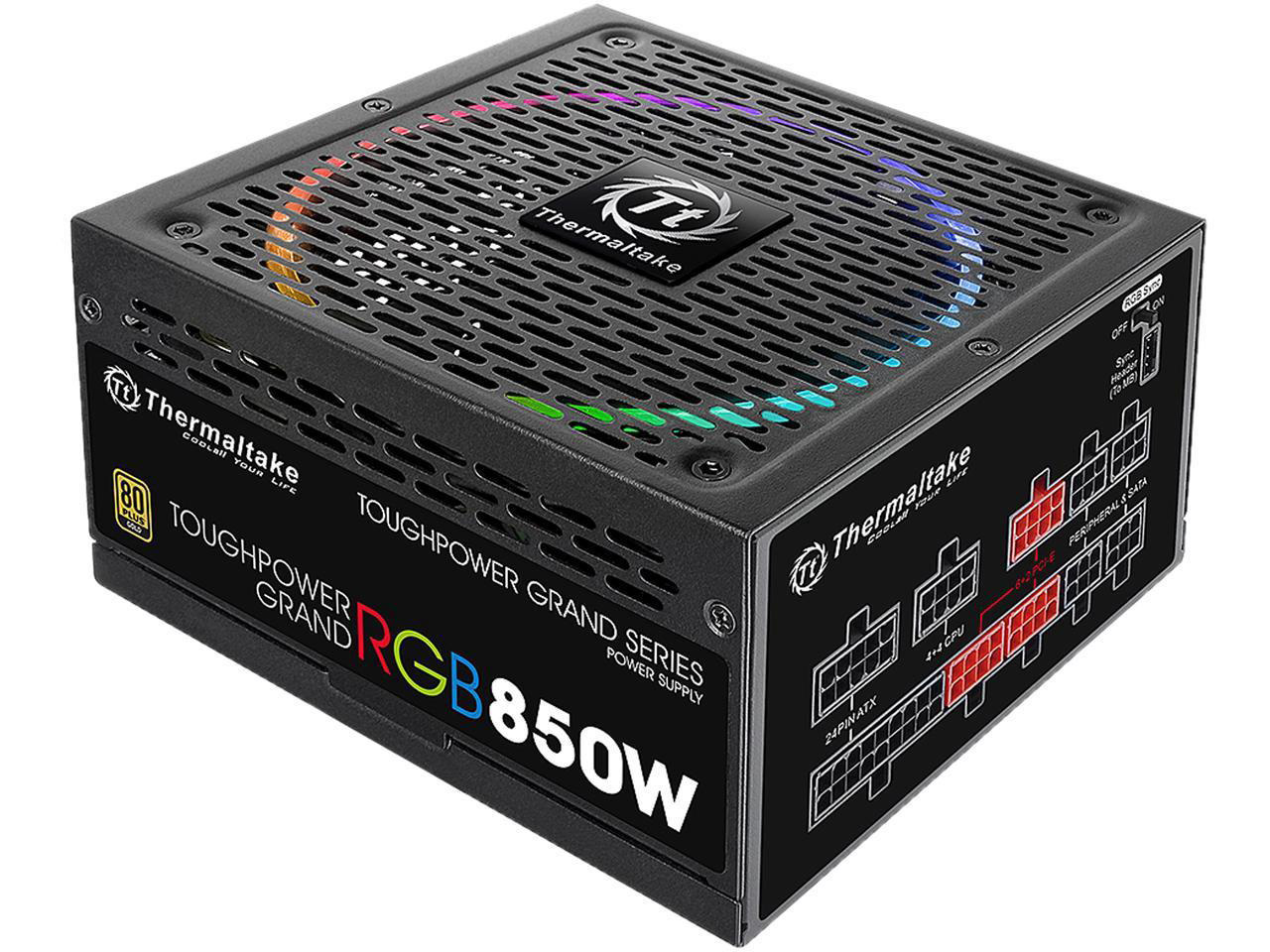 The unit is pretty unassuming, and while this is definitely a subjective comment it does feel light compared to competing units from Corsair, for example. Nonetheless, that’s not a bad thing in and of itself, and it’s held together perfectly fine. We also like that it’s only 160mm deep, as this will leave more room for cable management and ensure compatibility with more cases. 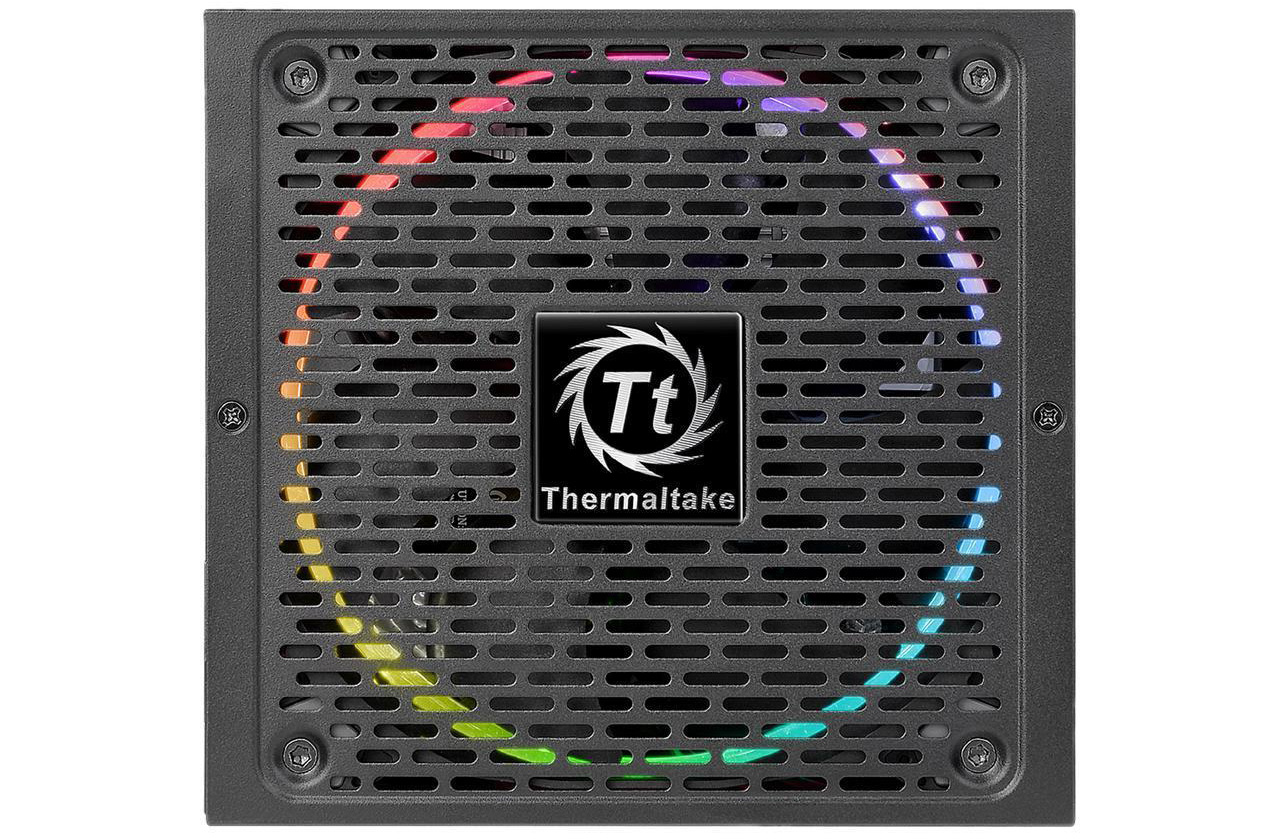 The fan is one of Thermaltake’s own Riing 14 RGB units with 256-colour support and five hardwired modes: RGB colour cycle, red, blue, white, and green. You can toggle through these using the square RGB button on the back of the unit.

Ordinarily, we’d complain that that’s a pretty limited RGB feature set, but as you might have guessed, the ‘RGB Sync Edition’ in the name refers to the PSU’s ability to synchronise with motherboard RGB software control via four-pin 12V headers. The vast majority of moderns boards with such headers are supported, but you can see a full list here (PDF warning). Once the header is connected you also need to toggle a switch next to the modular cable plugs to hand control over to the board. This grants you much more lighting control, although regardless of colour/pattern, the lighting is quite muted and could do with being a bit brighter, especially as it's a key feature. Note also that it's not addressable RGB lighting, which maybe gives us an indication of what to expect at Computex 2019... 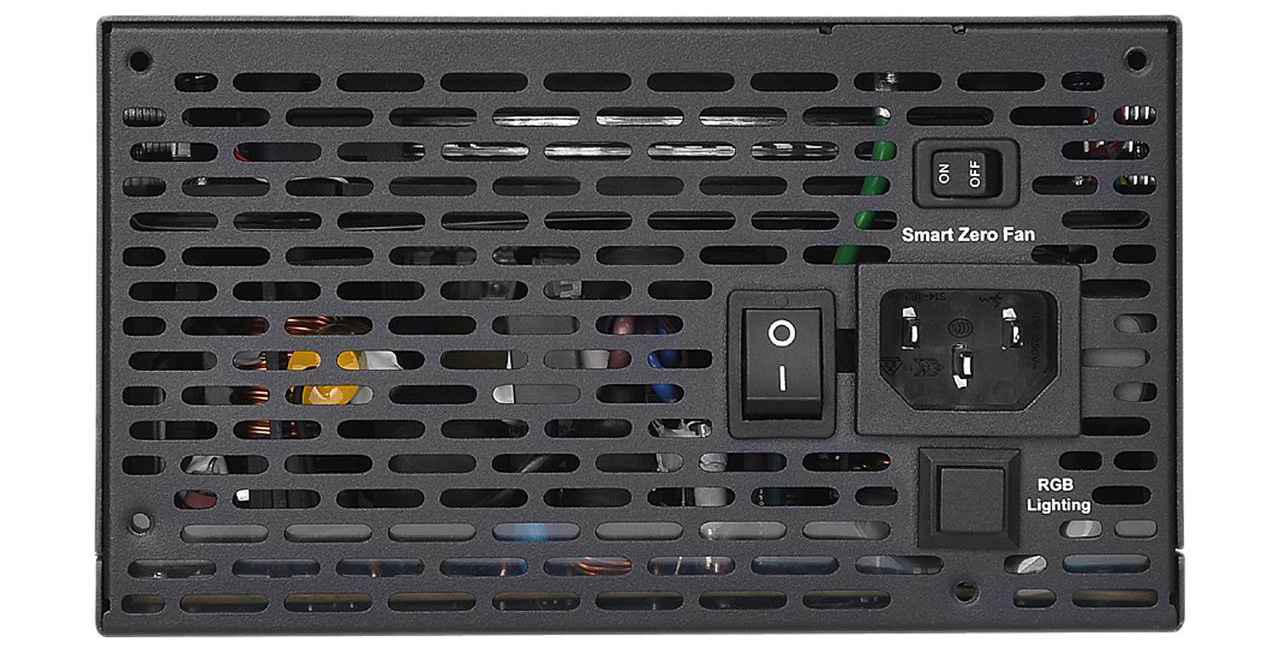 Back to more practical matters, Thermaltake helpfully uses anti-vibration mounting points to secure the fan. The Toughpower Grand RGB Gold (RGB Sync Edition) also has a semi-passive fan, but the implementation is problematic. Firstly, there’s a switch to toggle this feature on and off (not really a negative, but it’s hard to see why anyone wouldn’t keep it enabled), and secondly, the fan will start spinning at just 20 percent load; it’s common to see competing PSUs start up in the 40 percent region, which means more time with blissful silence. 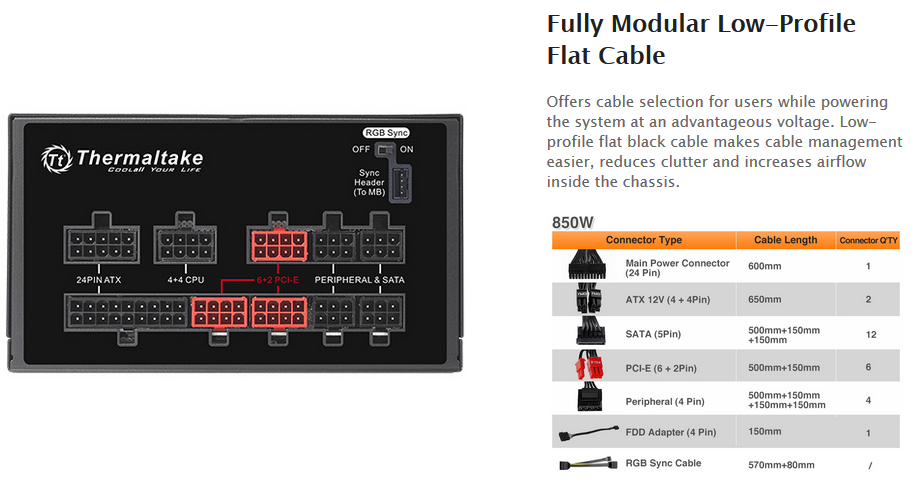 As expected, the unit here is fully modular. Thankfully, Thermaltake has been sensible with the cable offerings, giving users up to 12 SATA connectors, two 4+4-pin CPU plugs, four Molex, and six 6+2 PCIe headers. The cables are all nice and flat and also of decent lengths (minimum 500mm), so no complaints there.

The internal layout passes visual checks and is very neat with clean soldering. It appears to be a Sirfa OEM design, and sports DC to DC topology and a single 12V rail that can tolerate the entire wattage. Thermaltake hasn’t taken shortcuts with capacitors either, using 100 percent Japanese ones throughout. Another plus is that the unit is rated for an operating temperature of up to 50°C.

With what appears to be a quality design, it’s great to see Thermaltake offering a solid 10-year warranty with this unit. All that remains now is to see how it performs electrically. 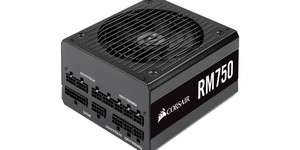 A solid performer with a fair price. 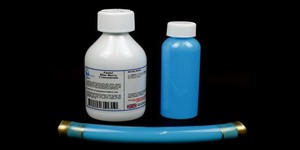 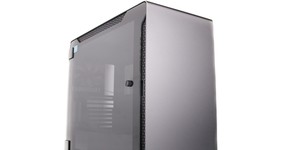