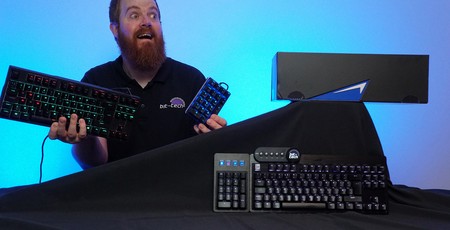 Andy is at the starship video helm today and charts a course for reviewing the eagerly-anticipated Mountain Everest keyboard.

The Mountain Everest Max claims to be the most innovative, customisable keyboard ever, and whilst its list of features is impressive, they’re not exactly new ideas. Most have appeared in keyboards past and present, maybe just not all at the same time.

The core of the keyboard is a rather nice TKL board, with a dual-layer CNC’d aluminium faceplate, hot-swappable keys, per-key illumination, a USB 3.2 Gen 1 type-A passthrough and magnetic riser feet that are pretty strong and grippy. This can be had either as a barebones kit for you to apply the switches and caps of your own choice for £130, or complete for £150. So far, so normal, but it is nicely made and finished. There’s also a magnetic wrist wrest, but this is a little shallow and my hands rested on its back edge.

It’s what else that attaches to the keyboard that is the main selling point, though. Available separately or as a bundle with the TKL core for £230 - this Max version, saving £55 in the process - the Everest has both a removable number pad with programmable display keys and media dock with display dial.

The numpad has the same basic make-up as the TKL unit, but above the normal keys are four programmable display keys, each with a 64x64-LCD display in the key. Whilst a nice touch, LCD keys have been seen before, entire keyboards of them even. These can be programmed for a range of tasks; simple OS commands, launching programs, macros and even  some specific pre-set functions for OBS, aiming for a slice of the Stream Deck market. The numpad can also be swapped from the left to right side of the motherboard, but this, too, has been seen before; the earliest example I can think of being the 2008 Microsoft Sidewinder X6. The mechanism for attaching is a little flimsy and all too easily comes off. This will likely be an early failure point.

The media dock can be attached to the top left or right edge of the TKL board and has four media keys and a 5th button to select options on the adjacent wheel, which has an LCD display in it. Through this dial you can control most of the keyboard functions or show information, like time and PC component usage (Logitech G series anyone?) and can have a screensaver. The four media keys and dial can be programmed for macros, etc., just like the rest of the keys and I actually got quite a lot of use from the dial using it as an editing wheel. Sadly, this was just about the only thing I enjoyed about using this keyboard, even if the wheel’s plastic was a stark contrast to the quality and feel of the rest of the board.

The keyboard switches must be completely bone dry as they had a metallic echo, similar to whacking a hollow metal pole (see 22:00 in the video). This is all the more surprising as Mountain claims they’re manually lubed at the factory AND that it has a layer of dampening foam between the PCB and case. Even without the noise it was unpleasant to use; the keyboard and/or software crashing regularly, breaking workflow or killing your character while gaming. The display keys often forgot what they had been programmed to do and there were several other shortcomings or missed opportunities within the software.

With a lot of its “customisation” over and done with once you have it set up how you like it, all it really leaves is a fairly average keyboard, a lot of its special features essentially just being macros of one form or another. Once you’ve got used to the layout of a more traditional keyboard and learned the hotkeys by heart, is it really any different? Add-ons like Corsair iCUE Nexus also have vastly more functionality by the numbers alone (a possible 1,536 functions vs the 20 on the Everest), which they try and use as a comparison for explaining why the Everest is good value, which it isn’t. A separate TKL board, numpad and scroll wheel can be purchased for not much more than just the core TKL unit.

• Software is easy to use

• Profiles can load automatically with the program they’re used for

• Numpad falls off too easily, potential point of failure

• Both keyboard and software prone to freeze up and crash

• Similar setup can be achieved for less