It's been over a year and a half since we last looked at an aluminium-clad keyboard from Corsair. The K70 RGB was the pinnacle of the company's efforts in the keyboard market that stretched back five years to the likes of the equally excellent K60 and in the meantime, the Strafe range of keyboards have been taking the headlines instead. They weren't bad, and included RGB lighting, a new switch in the form of the Cherry MX Silent and saw improvements in Corsair's CUE software. They lacked the finesse and many of the features of the K70, though, such as the volume roller, dedicated media keys and the aluminium fascia, while the standard Strafe model also lacked a wrist rest. Click to enlarge
Today, though, we're pleased to report that the K70 is back and it's sporting even more features. There are actually three new keyboard models launching today. First up is the top end K70 RGB Rapidfiire, which is slated to cost £150 - roughly in line with Corsair's previous top-end keyboard models. Next is an identical model that lacks RGB backlighting - the K70 Rapidfire, which will set you back £120. Finally, the K65 returns too in full RGB mode with the K65 RGB Rapidfire and will also cost £120.

As with the Strafe and previous K70 models, the large wrist rest is included in the box, but whether you fit it or not is up to you. It's a nice touch, although in an ideal world we'd like it to be a little longer and higher to provide a decent amount of support. As it stands it slopes off quite quickly so isn't a realistic replacement to many of the aftermarket rests out there. Still, plenty of keyboards lack one entirely, and once you get used to it, you'll find it difficult to use the keyboard without it, which can only be a good sign. Click to enlarge
As with most of Corsair's premium keyboards, you also get a single USB passthrough port, which makes a return having been present with the original K70, but cut from the K70 RGB. This hasn't made the move to USB 3 yet, so using it for storage devices isn't ideal, but then it's mainly there for connecting headsets and mice. Still, it's something Corsair could consider on future models, especially as the company isn't a stranger to USB-powered storage devices - maybe a second port of the USB 3 or USB 3.1 variety facing you somewhere, allowing you to plug in USB flash drives could be considered.

The BIOS switch at the top of the keyboard is here again too - this isn't anything to do with the software, but actually allows you to adjust the USB polling rate as this can mean the keyboard will refuse to work in some motherboard BIOSes. We have no complaints with the cables, which feature the usual split end for powering the keyboard and USB pass-through, covered in weaved braid and stretching to 2m.

Click to enlarge
All three keyboards sport yet another new Cherry MX switch and once again, Corsair has an exclusive on the switch for at least the next six months. The switch in question is the Cherry MX Speed RGB. This is essentially a red switch with the same 45g actuation force and per-key RGB lighting, but a much reduced actuation distance, which has been cut from around 2mm to just 1.2mm in the new switch. Cherry MX Speed vs CherryMX Red- Click to enlarge
For those hyper-sensitive twitch gamers out there, this can potentially give you an edge with a slight faster response time - Corsair claims up to 40 per cent, especially given the red switch's comparatively light actuation force too. It's certainly a shorter distance than some of the K70 RGB Rapidfire's competitors - Logitech's switches in its G910 and G810 stand at 1.5mm for example. As you'd expect there's full key set anti-ghosting and key rollover too. Click to enlarge
Getting back to the keyboard itself and as we've already touched on, the K70 RGB Rapidfire sees the return of the aluminium fascia as well as dedicated media keys and metal volume control roller, so already it looks like better value than the Strafe RGB, which retails for just £5 less. When we were writing this a few days ago, the original K70 RGB was still doing the rounds too, and unsurprisingly, it had seen a fairly substantial price cut to around £115, for the Cherry MX Red version at least. Click to enlarge
The original K70 RGB obviously offers additional switch types - the K70 RGB Rapidfire is only equipped with the new Cherry MX Speed switch and while Corsair claims it has also improved the backlighting and included a larger font size (that much is clear compared to the Strafe series anyway), the improvements aren't enough to warrant either an upgrade from the original K70 or considering buying the K70 RGB Rapidfire instead if you actually prefer a different switch type - Cherry MX Brown for example. The new keyboard will sit alongside the previous K70 models for the foreseeable future, although Corsair now has a formidable line-up with its RGB range of keyboards too.

In the box you get the standard WASD and QWERFD replacement textured keys for FPS and MOBA gamers and key-puller that are included with most of Corsair's keyboards now. The spacebar, though, is textured out of the box like its Strafe keyboards - we'd maybe have liked to see a smooth spacebar instead like the original K70 with an option to use a textured one, but we're probably being picky.

Click to enlarge
Two pairs of keyboard stands are included - two at the front and two at the base. This allows you to tilt the keyboard in both directions, allowing a fairly raised top end, standard tilt and a practically horizontal orientation too.

Click to enlarge
The lighting is full RGB and can be adjusted to several brightness levels either using the software, which we'll go into more detail with in a minute, or using the brightness button on the keyboard. It's vivid and thanks to the larger, thicker font, the colours are really punchy Click to enlarge
Head over the page to see the software analysis and conclusion. 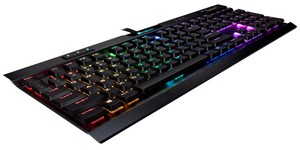 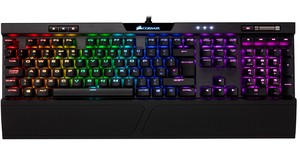