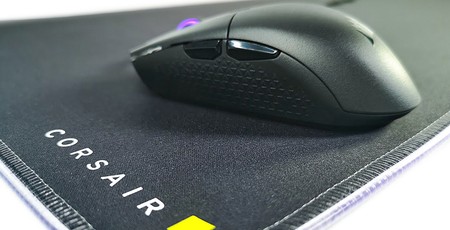 Earlier this month, Corsair released the MM700 RGB extended mouse mat and the Katar Pro XT mouse, priced at £60 and £35, respectively. We've got both in for testing today. I think at this point we can all agree that extended mouse mats are here to stay. There is an argument to be made for bigger mouse mats that also cover your keyboard area and practically all the desk in one fell swoop.

Coming in at a considerable 930mm x 400mm, the MM700 should reasonably cover most mouse and keyboard requirements without flopping off the end of proper computer desks. It's made from 4mm rubber which Corsair claims smooths out any imperfections in the surface, although I'm not aware of many desk surfaces with random holes so I'm not entirely convinced of the usefulness of this claim. With that said it does feel firm but with a slight bit of give and cushioning that makes it feel very flat. It has a surface that I can only describe as a very fast-playing snooker cloth. Corsair also talks about the anti-skid texture on the bottom of the mouse mat. At first I was dubious of how much this would actually prevent slipping but after being able to push myself back while in a desk chair without the mat moving even a millimetre, I'm impressed with its stability. The main feature points are the 360-degree RGB lighting and the two-port USB 2.0 hub at the top-right. The lighting can be cycled between the 12 onboard profiles via the button in the corner or be fully controlled through the iCUE software which notably still isn't supported on Linux. The two-port USB hub, meanwhile, comes across as a very nice feature at first glance but upon using it some downsides start to show. While one of the USB ports has been put on the right-hand side of the hub the other is at the bottom... right where your potentially fast mouse is moving. I've got no idea why it was put there but the fact the hub is on the right-hand side instead of the left makes it 10 times worse for the majority of gamers who hold the mouse in their right hand. You also have the problem of mouse flicks hitting the cable coming out of the bottom of the pad when playing fast-paced games like Counter Strike: Global Offensive or League of Legends. Corsair, however, does recommend that users only use this downward-facing port for small USB receivers... but why not put it on the other side of the hub or the mat and solve the potential problem completely? The only other major point is the stitching Corsair has used around the edges. The way the stitching has been done to allow plenty of light to shine through - but keep the lighting strip attached - caused a noticeable rough feeling on the bottom of my bare forearm from any mouse movements. It's not a massive issue most of the time, but when you do move your arm, it's certainly noticeable.
Overall, the MM700 does provide good lighting and one of the best mouse surfaces I've used on a large mat. It's unfortunate, then, that it's let down by the placement of the USB ports/hub and the rough edging. If you don't plan on using the front USB port and you must have an RGB mouse mat, then I feel it's a high-quality option.