We're sure many of you are familiar with Box.co.uk; not only does it stock a wide range of components, it also serves the broader consumer electronics market in categories extending all the way to things like home appliances and wearable tech. It's also well established, having started in 1996, making this year it's 20th anniversary.

Box isn't just a faceless website either, as evidenced by its retail store in Minworth, on the outskirts of Birmingham, with over 5,000 lines in stock, including the latest online deals. There are sections for all major brands, playable games including a triple screen, in-seat racing rig and a number of the company's custom-made PCs. You can see a selection of pictures from the store, as well as the warehouse behind it, throughout this article. Click to enlarge - The Box retail store in Minworth
What you may not have known is that Box, or more accurately Cube, is one of many companies in recent year to have gotten in on the system integrator market. Cube was launched around 18 months ago as Box's SI brand, offering pre-built PCs through a small handful of retailers, primarily Box of course, as well as fully customisable ones directly through the Box website.

This is hardly a surprising move. PC gaming is no longer the niche it once was. As far as we know, it is the only segment of the PC market experiencing growth; year-on-year, we might add. With this growth comes an increased demand for PCs, but off-the-shelf HP home office PCs, for example, are no longer cutting the mustard – they're just not seen as suitable for gaming. On the flip side, not everyone has the knowledge, desire or time to build their own PC from scratch – most consumers just want something that works. That bulging middle ground is precisely where SIs like Cube come in, offering pre-built or custom PCs that rock gaming credentials but retain a console-like experience with regards to buying and using them. It's very often cheaper to buy a PC in this way than sourcing the parts yourself, and you get a system-wide warranty and a working system delivered to your door after doing little more than clicking through a website. Click to enlarge - The Box retail store in Minworth
Of course, for enthusiasts like ourselves and our core audience, doing everything ourselves is pretty much the whole point. But even for us, in the time-starved lives that many of us lead, the time spent researching and building a PC isn't always an option, especially if we've merely been tasked with finding something for family of friends.

The birth of Cube saw a new, dedicated SI suite built at the Minworth HQ and a team of four engineers hired, each with a background in PC gaming, as well as building and overclocking. Click to enlarge - The Box retail store in Minworth
Although pre-built systems are useful for marketing purposes and fast turnarounds, any SI worth a dime will have strong customisation options, which is where the Cube configurator comes in. From the starting page, you can start from complete scratch, or select from useful categories such as the type of games you want to play or VR ready systems. Once you're in, you'll find a wide range of components, with exact models for everything properly listed rather than just generic descriptions. Certain component choices (like a mini-ITX case or Intel CPU) will start to limit what you can pick elsewhere to prevent incompatible choices, and there's a Live Chat function in case you get really stuck or need some advice. You can also easily change your mind without having to reconfigure everything else. All components are from reputable brands and the company is a named OEM for Microsoft Windows sales as well. One cool feature is the ability to have Cube pick up and use your own case for the build if the one you want isn't available or you already have one spare. Click to enlarge - The Box retail store in Minworth
Cube also offers a few aesthetic options, such as LED lighting and braided cables. Sadly, custom water-cooling is not available, although it did tell us that this is a service it offers locally through its store. Hopefully, it will eventually become a standard offering on higher end systems.

Cube systems come with a standard three-year warranty including one year collect and return and one-year parts, with two-year and three-year extension programmes available too. The standard free build time is 10 working days. We're told it averages 6-7 anyway, but faster, guaranteed options are there too. DPD is used for all deliveries, ensuring customers get package tracking and updates, and systems are tested for 24-48 hours before dispatch. Click to enlarge - Part of the Box warehouse, and the new Cube SI building suite
Of course, the real proof is in the pudding, and thankfully we have some pudding here (mmm, pudding). We're in the process of testing a Cube machine right now, so you can expect a system review, as well as something else Cube related which is very exciting (Cubetacular, you might say), in the near future – watch this space! 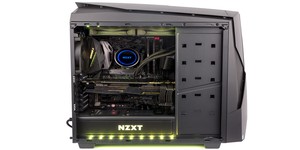 Coffee Lake and Z370 are the hot topics right now; can this system put them to effective use? Answer one question to be in with a chance of winning this overclocked gaming PC worth £1,750