If a formula isn't broken, it's usually wise not to mess with it too much, and Synology has adhered to this sensible rule for a while with its NAS enclosures. Something that's always intrigued us, though, is how it can justify charging more for some NAS enclosures and less for others, considering models in one particular range will have the same number of bays as well as, more importantly, mostly the same set of software features. The answer comes in the form of models such as the DS216. Click to enlarge
There are a few tweaks here and there that Synology hopes justify the extra outlay - in this case £246 for the DS216 compared to £144 for the cheaper DS216j. Starting under the hood, there's actually very little difference. Both use 512MB of DDR3, and both feature the same Marvel Armada 385 88F62820 dual-core CPU.

The one on the DS216 is clocked 30 percent higher, though, at 1.3GHz, which is clearly going to give a lot more grunt in dealing with demanding tasks or multitasking. However, the DS216 is also in the same group as the cheaper DS216j when it comes to video transcoding - in short, it's much more limited than some other models such as the DS216play and DS216+II and many four-bay models, many of which can transcode at either 720p or 1080p on-the-fly to consoles and mobile devices. So with the DS216, it's mostly the extra grunt in dealing with other normal day-to-day NAS tasks that will benefit it compared to Synology's cheaper models. Click to enlarge
The DS216 does also offer more ports and a more refined chassis too, though. The front section - a glossy black cover - simply pops off, allowing you to access the two 3.5" drive trays. Both of these feature anti-vibration, tool-free mounts, so installation is extremely quick - much faster than cheaper models that require screws. In testing, the enclosure was also noticeably quieter than a DS215j we had to hand, with less hard disk noise and vibration. Click to enlarge
Most of Synology's two-bay enclosures sport two USB 3.0 ports on the rear these days, and the DS216 is no exception. These can be used for all manner of things including external storage, but also Wi-Fi modules and USB speakers too - the DS216 has its own audio engine and playback software. However, while it has a front USB port, this is only USB 2.0. We can't see the logic of this given this would most likely be the port you'd use with your USB flash drive or external hard disk, both of which are almost certainly going to be USB 3.0, so you'll be waiting a while for those files to transfer unless you fiddle around at the rear of the NAS. 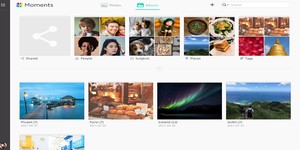