The true benefit to MSI's UEFI comes from its extra features though - the HDD backup, BIOS Flash and Live Update are usually key Windows features added to many MSI motherboards but to be honest, very few of us install. The downside to using these extras in-BIOS is that they require an additional CD to load the program data from - there still isn't enough space in the actual BIOS ROM.

This becomes a pain in the arse because we had to fish out the box to find the CD again, but for features we use none too often somewhat acceptable, and it's cheaper for MSI than soldering a bit of flash to the actual PCB. Hopefully in future though, as UEFI becomes standardised, we'll get it all included.

The benefit of having them natively included is that they don't impact on your Windows install and they become simpler to use - the Live Update worked perfectly for us (for a change), although the BIOS Flash clearly needs some work - the screen corrupted and the BIOS ground to a halt as we tried to select a directory to save the current BIOS image to. Given the recent experience we had with MSI’ M-Flash on the X58 Eclipse, this just continually re-iterates a feeling of “avoid MSI’s in-BIOS flash utilities”, but having said that, the design is infinitely better than MSI's M-Flash utility in its X58 Eclipse so at least it’s a bit of a step forward. Click to enlarge
In addition to the useful features above, MSI throws in a few games as well, because, obviously, when I'm fiddling with the BIOS settings and preparing my system that's really what I fancy doing. These mini-games aren’t just crap though, they've all got less novelty appeal than a toy from a cracker and in some cases, they're outright tasteless too. The breakout game is the truly awful centre of this mess - we found ourselves nervously laughing in sheer disbelief at the knife bouncing bar, and in the photo behind the game there's an unfortunate war victim in the top of the tank. To top it off, when we inevitably failed, a field of WW2 graves were displayed.

Now being versed in all things internet in the office, we're not that sensitive to much anymore, but I’m sure our readers will agree – that’s just damn right tasteless and disrespectful! Click to enlarge
Dear MSI, just drop it all! Gaming does absolutely no favours for you here. Hit the delete key and don't look back. Concentrate on making UEFI become easy to use, customisable and include features that you'd expect to find here, not just because your marketing team wants another bullet point. We've no doubt when UEFI becomes more mainstream we'll have to put up with a whole ton of "tick box" crap like this as companies strive for an edge in a competitive marketplace. Click to enlarge
If you buy an MSI board and don’t like it though – the old school BIOS is still supported, just re-flash over it. However, MSI doesn’t include any sort of BIOS backup on board, which is a little worrying, and what would also be a good idea is to ship the board with both BIOS’ and let the user manually switch between them – creating a backup, and a safer real time option.

In all, we like what MSI has done with a familiar place - the important parts work well and it's certainly an improvement which is what counts at the end of the day. There are some ideas that completely baffle us and are best left untouched or removed by MSI, but generally we just can't wait until it's ported across the rest of its range to boards we really want to buy or already use because the potential is immense! 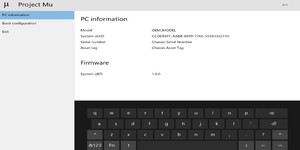