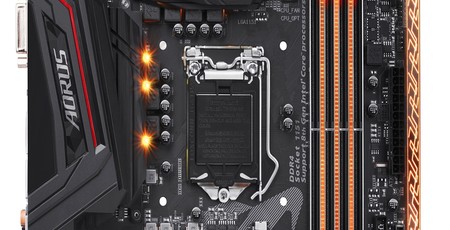 We aim for 5GHz with Z370 boards using our Core i7-8700K, and usually 1.3V offers perfect stability with our CPU. We worked backwards from here but quickly ran into stability issues. In the end we found that applying the turbo loadline calibration mode offered stability all the way down to 1.25V, which was a similar story to the Gigabyte Z370 Aorus Gaming 7. Thankfully, there was no excessive power consumption either, with the 218W peak power draw being less than the Asus ROG Strix Z370-E Gaming.

To see an in-depth look at Gigabyte's latest EFI and software head here. Without a heatsink, we found the M.2 SSD did get quite toasty, reaching a peak of 72°C. By comparison, the heatsink on the Z370 Aorus Gaming 7 knocked nearly 20°C off this temperature, but despite a good 10 minutes under load this didn't seem to introduce any throttling as the M.2 speed test was on the money, except perhaps for a slightly slow write speed.

Audio performance was excellent too, and you'll lose nothing by opting for the Z370 Aorus Ultra Gaming compared to more expensive boards. Many stock speed numbers in our benchmarks, however, pointed at marginally slower performance in content creation and gaming, but these amounted to just a few percent at most. The Z370 Aorus Ultra Gaming is pretty much exactly where you'd expect it to be in terms of price considering its features and performance. Sure, you don't get Wi-Fi or M.2 heatsinks, but if you don't need these features then you're not going to miss them, and they're not integral to everyone's needs. The price reflects these omissions, and we've spotted it as cheap as £155, which makes it at least £25 cheaper than MSI's Z370 Gaming Pro Carbon AC or Asus' ROG Strix Z370-F Gaming.

Combined with some very detailed fan control and handy Windows-based software, RGB lighting, and decent overclocking performance, it seems to have nestled into its own little niche between cheaper boards that lack much aesthetic pizazz and the big boys that cost noticeably more. If you want a board that still packs a visual punch and can keep up with the best overclocking-wise, but have a budget of around £150, then it's a great choice. 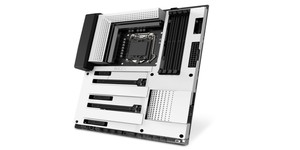