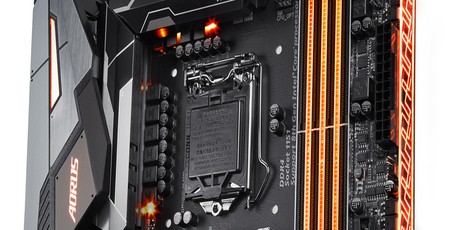 It's fairly clear that you'll be paying a little more for your Z370 board than you would have done for its Z270 equivalent 10 months ago. However, as we saw with the Asus ROG Strix Z270-E Gaming, you do get more features as well.

Gigabyte's previous mainstream Intel Gaming 7 board was clad in white shrouds and heatsinks, so design-wise, things have changed a heck of a lot. We're now dealing with a much darker, meaner-looking motherboard in the Z370 Aorus Gaming 7, but while it costs a few notes more, there are indeed a few additions to the specs table too.

The previous board was somewhat Christmas tree-esque in terms of lighting, which betters anything Asus and MSI have in terms of intensity and coverage, but the Z370 Aorus Gaming 7 sports even more RGB LEDs, this time stretching to the VRM heatsink and PCH too. However, it somehow manages to avoid being garish, and instead the neat little pinpoints of light in the DIMM slots and PCIe slots actually make this board look very impressive. There are now four programmable lighting zones plus two RGBW LED headers and digital strip headers that can control individual LEDs on compatible lighting products. Thankfully, it's not just illumination that's been bolstered and bumped up the price tag. There are now three M.2 ports, one of which sports a large heatsink that's meatier than those on MSI's boards we've seen so far. You also get a USB 3.1 Gen 2 header on the motherboard. The U.2 port of its predecessor is gone, and you get just six SATA ports, which might be considered a tad lacking on a board costing £250, but you do of course get those three M.2 ports as well. The base of the board offers an LED POST code display and you get the usual power, reset, and CMOS clear buttons at the top of the board. It's a shame you need to spend this kind of cash to see these features these days - they're useful for benchmarking and out-of-case testing, and we find them particularly useful. The top SSD slot is well-located too, as it's out of reach of our graphics card's side exhaust. The heatsink sports a thick slab of thermal material and simply screws into place. We recorded a 9°C drop in peak load temperature when running through CrystalDiskMark's full suite of tests too, so it's good to see it works, although the larger heatsink on the Asus ROG Strix Z270-E Gaming managed to kill a couple more degrees.

There's no Wi-Fi, which may be a deal-breaker for some, and you only get six Type-A USB ports. While all at least USB 3.0 speed (one is USB 3.1), we'd have been happier to see another pair on the rear panel, even if they were USB 2.0. The pair of LAN ports sport both Intel and Killer controllers, and while the audio is the usual Realtek ALC1220, Gigabyte includes an ESS Sabre DAC, a smart headphone AMP, and a DAC-dedicated USB port for better voltage control. It also bundles Creative's Sound Blaster X 720 software, which adds features such as an equalizer and Crystalizer surround effects. 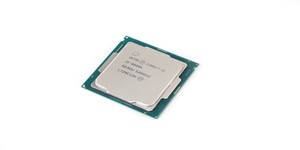