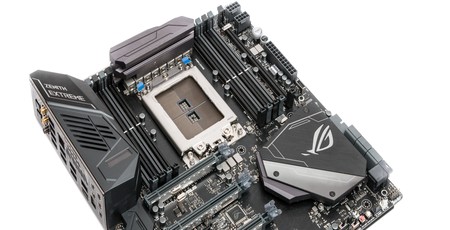 If you've already read our Threadripper coverage you'll know how the ROG Zenith Extreme fared in dealing with our Ryzen Threadripper 1920X - and it hit an all-core frequency 4GHz using a vcore of 1.3625V. This is a noticeably lower voltage than many other Ryzen CPUs we've tested on AM4, but it's still 200MHz lower than the XFR boost of 4.2GHz, which is able to apply across four cores.

You get a near-identical EFI and software set as Asus' ROG-branded X299 motherboards, so if you want a more detailed look at these, head over to this overview from a previous review where we look at Asus' latest software and ROG EFI. We've only just put the first Threadripper board through out battery of tests so we don't have too many results to compare against. However, overclocking was generally very worth it despite the fact that our CPU seems to top out at 4GHz - 200MHz lower than the XFR boost which can see stock speed results performing a bit better in some isolated tests as a result. For example, the Cinebench score rose 200 points, while 17 seconds was shed from the 160-second rendering time in Terragen 4 and six seconds in HandBrake, where the video encoding time fell from 61 seconds to 55 seconds, which is 10 percent quicker.

We suspect that 3DMark Time Spy prefers a limited number of high-frequency cores, which is why there was a faster result at stock speed, but in general there was next to no difference here, while there were modest gains in Unigine Superposition and Ashes of the Singularity: Escalation. It seems that the way the PCIe lanes are routed with the X399 platform is more beneficial to PCIe M.2 drives than with Intel's X299 platform as the speeds on offer are much higher - something that appears to be limited to Skylake-X CPUs. With the ROG Zenith Extreme, speeds are back up to 3,400MB/sec read and 1,800MB/sec write, which are what we saw with Intel LGA1151 and AMD Scoket AM4 boards this year.

Audio performance is pretty much what you'd expect from a SupremeFX S1220 codec, which we've seen on several other boards recently too across three other platforms this year, while power consumption is fairly high once overclocked at just over 400W for the system, and that's with minimal load on the graphics card too. This is a platform trait, though - not something Asus is guilty of.

We're clearly dealing with a monster motherboard here, and while the price tag is eye-wateringly high, we can't help but love the awesome arrange of features and accessories that come with the ROG Zenith Extreme. From the funky and useful DIMM.2 adaptor for M.2 SSDs to the excellent layout and overclocking tools as well as the 10Gbps LAN card that's already seen us Googling the prices of 10Gbit networking hardware, there's a huge amount of cutting-edge gear in the box. Perhaps one consolation and quite an eye-opening fact is that if you opt for the Threadripper 1950X compared to Intel's equivalent 16-core, the Core i9-7960X, you'll be saving around £600, allowing you to splash out on the ROG Zenith Extreme and maybe have some cash left over too. In any event, this is certainly an extreme motherboard for a lucky select few, but the on-board cooling, layout, features and aesthetics are fantastic and anyone building a Threadripper system should be seriously considering it. 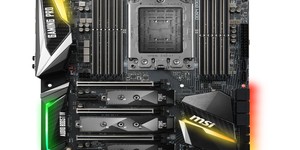