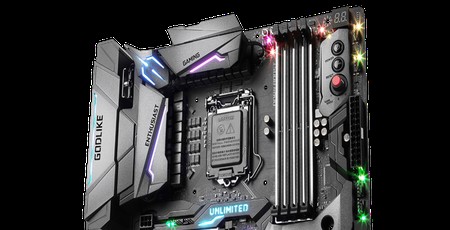 We know a lot of you would rather not be reading this and realising today that you will indeed need a new motherboard for your shiny new six-core Core i7-8700K, but the reality is that you will. Thankfully, there's a whole raft of new boards, many of which you can see here, that come in all shapes, sizes, and price tags.

Today we're looking at MSI's Z370 Godlike Gaming, a monster motherboard with an equally hefty price tag - don't worry, not all Z370 motherboards cost this much, but we have to start somewhere, and we'll be back shortly with more board reviews too. As the pinnacle of MSI's Z370 prowess, the Z370 Godlike Gaming is unsurprisingly dripping with features both on the PCB and in the box. Starting with the former, there's the full complement of overclocking and testing tools such as LED POST code displays, power, reset, and CMOS clear buttons plus a dual BIOS switch, and for the extreme overclocker there are additional power connectors for the CPU and PCIe slots as well plus MSI's Game Boost dial for quick overclocking. We're surprised to still see U.2 ports this far down the line, but if you're spending this much cash on a motherboard, chances are you may have one lurking that you want to use. The board also offers every major USB connector, from USB 3.0 and USB 3.1 Type-A and Type-C ports on the rear panel to USB 2.0, USB 3.0, and USB 3.1 headers on the PCB. We doubt you'll be short of M.2 ports here, with three on the PCB and another two via a 16x PCIe card, and all are equipped with heatsinks that are fairly similar to MSI's previous efforts. We saw a 6°C drop in load temperature on our Samsung 960 Evo using a heatsink too, so they're definitely worth using, while the PCIe card might make it easier to install or remove them when your motherboard is inside a PC case. Also in the box is a USB header expansion card, a Phanteks RGB LED strip, thermal probe cables, RGB LED extension cable, and six braided SATA cables.

RGB lighting is a major feature too, with a new port called Rainbow providing a way to control individual LEDs on compatible LED strips, and the board itself features extensive but fairly low-key RGB lighting. The board also sports its own ESS audio DAC and amplifier, WIMA capacitors, and up to 384KHz/32--bit audio.

The rear of the PCB is equally busy, and the obvious crazy feature is the trio of Gigabit Ethernet ports that can be hooked up separately, providing 100Mbps to each and giving dedicated bandwidth to specific tasks that are configurable in software. The onboard 802.11ac Wi-Fi can also get in on the action or can be used as a wireless access point, dishing out the board's Ethernet connection. There's also a 6.3mm audio jack, which is an extremely rare sight on motherboards.

You can see more information about MSI's range of Z370 boards here. 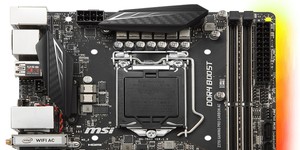