Please note that we have sourced multiple CPUs from multiple sources for the purpose of this review. No hardware was supplied by Intel.

We're revelling in what we're seeing from the CPU market at the moment. While AMD's Ryzen had its fair share of teething problems, its performance and the speed with which AMD is improving things in terms of stability and compatibility mean that it does offer competition for Intel.

We've seen things shaken up big time in the mid-range, with additional cores and lower prices often meaning that AMD finally has an advantage again in performance and value, but Intel still offers solid optimisation and better overclocking. Now, though, we're moving onto the high-end desktop, and this summer looks set for another showdown between the two CPU giants, one which could be even more interesting. Very soon, Intel will launch its X299 chipset, LGA2066 socket, and a mixed range of CPUs on what has been known thus far as its Basin Falls platform. Initially, this was going to encompass the usual six, eight, and 10-core CPUs with a mix of available PCI-E lanes, TDPs, and frequencies between them with the added possibility of a 12-core monster. However, two other sets of CPUs joined the fray and were confirmed just a few weeks ago at Computex 2017. These include a range of Core i9 CPUs starting with the Core i9-7900X, which offers 10 cores and 20 threads, as well as the expected 12-core/24-thread Core i9-7920X. However, what wasn't expected were 14, 16, and 18-core monsters by way of the Core i9-7940X, Core i9-7960X, and Core i9-7980XE.

These are most likely rebadged products from Intel's Xeon range, except like the cheaper offerings arriving today, they include the usual desktop features, some of which are new with X299. Intel's own schedule points to an October 2017 launch for the 14, 16, and 18-core parts (the 12-core i9-7920X is slated to appear in August), which means that this move can probably be seen as a reaction to AMD's Threadripper, which promises up to 16 cores, rather than the plan all along. There are also two quad-cores joining the fray - more on those in a minute. Whether Intel is a little jittery here, though, is a little beside the point. What's really interesting is the pricing, and this is for two reasons.

Skylake-X Prices versus Broadwell-E and Threadripper

We've seen rumours that AMD's 16-core Threadripper will cost as little as $850, making it cheaper than the 10-core Core i9-7900X that we're reviewing today, which has an MSRP of $999 and will thus likely cost £999 here including VAT. This could really shake things up in the high-end desktop market. However, the Intel CPU we're looking at today is itself something of a bargain given its predecessor, the Core i7-6950X, which also has 10 cores and 20 threads, hit the shelves at $1,569 a year ago. The new CPU has less cache but higher frequencies, specifically a 300MHz boost to the base frequency and a much higher Turbo Boost 2.0 frequency of 4.3GHz compared to just 3.5GHz for the older CPU.

The Core i9-7900X also has an improved Turbo Boost Max Technology 3.0 setup, which we'll talk more about in a minute, but the short story is it can boost up to 4.5GHz, which is a 500MHz advantage over the Core i7-6950X. It's a squeeze, for sure - on one hand, you're likely to see more on offer for the same cash from Intel both in terms of features, clock speed, and raw performance, but later this summer - we're hearing rumours of August - Threadripper could shake things up again.

While we may have to wait for for the most core-happy CPUs on the new X299 platform, one thing we do know is that everything at six cores and above will use the 14nm Skylake-X architecture, which uses the same manufacturing process as Broadwell and Broadwell-E. 14nm is going to be the lithography of choice for a while, with Kaby Lake being on 14nm+ and Coffee Lake stretching this to so-called 14nm++.

Core i7 and Core i9 - What's the Difference?

Once again, we're looking at a tactical choice when it comes to Intel's high-end desktop range, and like Broadwell-E and Haswell-E before it, Skylake-X offers a mix of PCI-E lanes. However, for CrossFire and SLI fans out there, it's not good news. The new X299 chipset and LGA2066 socket offer up to 44 PCI-E 3.0 lanes direct from the CPU, up from 40. However, the cheapest CPU that offers enough PCI-E lanes to provide two cards with the full amount of bandwidth is the CPU we're reviewing today - the ~£1,000 Core i9-7900X. That's double the amount that the Core i7-6850K cost a year ago, which was the cheapest in the Broadwell-E line-up to offer 40 lanes - enough to run two cards with 16 lanes each.


The latter does only have six cores compared to 10 for the Core i9-7900X, but this means that two-way graphics card setups just got a lot more expensive from an Intel perspective, at least if you're not willing to drop to eight lanes for at least one card. This does strike us as a slightly silly move, especially because all of AMD's Threadripper CPUs will have a massive 64 PCI-E lanes - enough to run three cards with maximum bandwidth - and they're expected to be cheaper on average than Skylake-X too.

AMD versus Intel aside, there are three levels of PCI-E lane counts. Starting at the bottom, the Core i5-7640X and Core i7-7740X - the two Kaby Lake-X models - have the usual 16 PCI-E lanes. Above these, but a step backward in terms of CPU architecture are the Skylake-X CPUs, which have been split into Core i7 and Core i9 categories, the former sporting 28 PCI-E lanes and the new flagship category signifying the maximum bandwidth, which is now 44 lanes - an increase of four over the likes of the Core i7-6950X and Core i7-5960X to help deal with next-gen storage including Intel's Optane technology.

The Kaby Lake architecture sees its number of CPUs extended by this launch too, as there are two quad-cores entering the fray. This initially seemed like an interesting choice, and our first thoughts were that Intel was bringing its high-end desktop platform to more affordable prices, perhaps giving those that want to go dual-GPU the benefit of extra PCI-E lanes at a lower cost thanks to cheaper CPUs. However, this didn't turn out to be the case, as even the six and eight-core parts lack enough PCI-E lanes to offer two graphics cards the full 16 lanes of bandwidth.

The Core i5-7640X and Core i7-7740X are essentially aimed at extreme overclockers. The fact that Intel has included them at all seems a little odd in the overall scheme of things, but the improving manufacturing process coupled with the fact that X299 motherboards offer more hardcore power circuitry than their Z270 counterparts means we should see higher frequencies not just using liquid nitrogen but with decent air and liquid-cooling too.

Of course, there are some pretty compelling reasons not to opt for one of these CPUs. There's no quad-channel memory support, meaning you'll be left with an awful lot of vacant DIMM slots on an X299 motherboard. You lack any other significant benefit over a much cheaper Z270 system, and you don't get the main boons of Intel's high-end desktop platform, which are more cores, more PCI-E lanes, and exclusive features such as Turbo Boost Max Technology 3.0. We appreciate the gesture from Intel for extreme overclockers, but for the rest of us, they seem to make little sense. 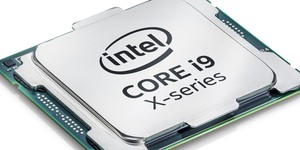