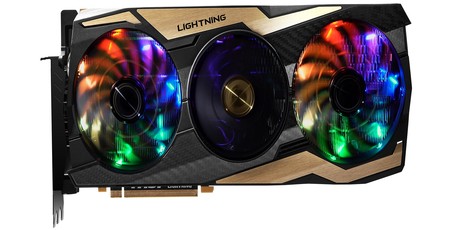 With the RTX 2080 Ti having been available for about four months now, we’re starting to see the second wave of third-party cards that go above and beyond the “regular” air-cooled models. The Asus Matrix, EVGA Kingpin, and MSI Lightning Z were all shown off at CES 2019, for example, and it’s the latter we’ve managed to get our hands on for today’s review. For MSI, the Lightning series has always been about pushing the GPU in question to the limit with quality components, high-end cooling, and nods towards extreme overclocking – and a very high price tag to match. For this generation, MSI is bringing Lightning solely to RTX 2080 Ti. 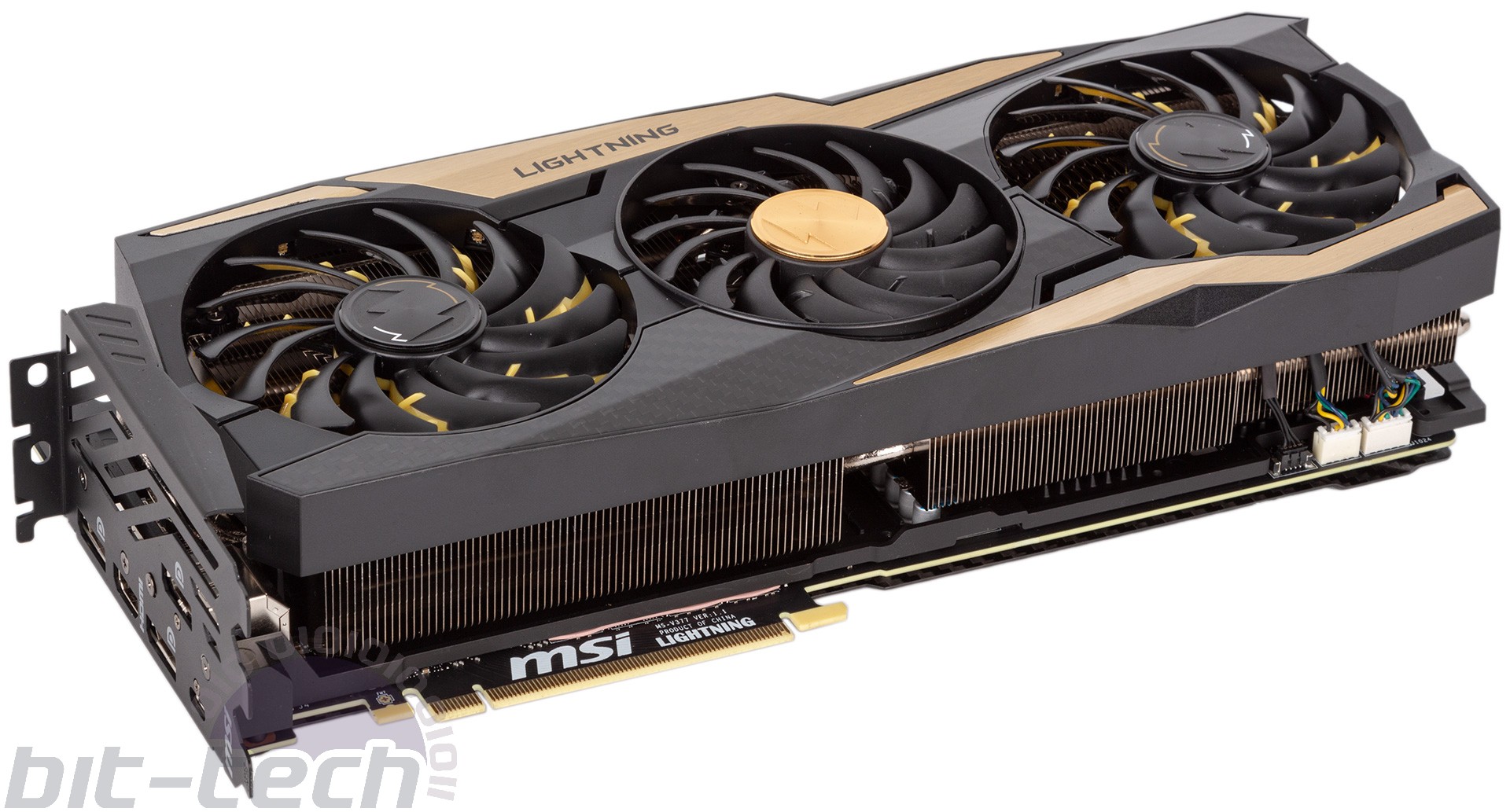 Most third-party RTX 2080 Ti cards are hefty, but this one is monstrous. Measuring 328mm long, it barely fits inside our Corsair Air 740 chassis without impeding the front fan. It weighs a staggering 1.85kg, and MSI has rightly included a dual-slot metal support beam to help prevent sag and PCIe slot damage. This does the job nicely and should screw over any other cards/brackets you happen to have in those lower slots provided you have long enough screws. 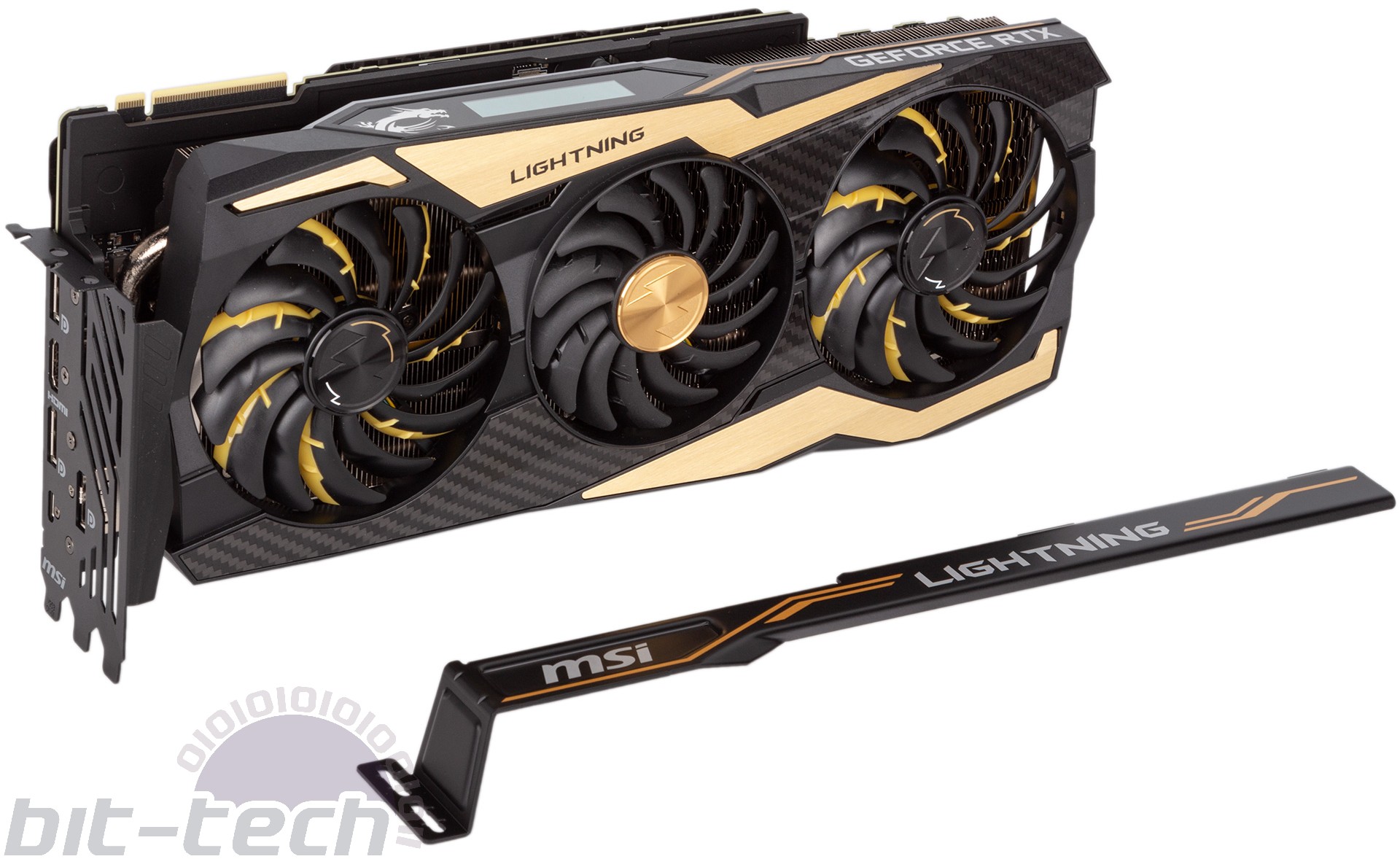 MSI has splashed the plastic cooler shroud with gold-coloured brushed metal highlights and carbon fibre patterning, which may prove divisive but is perhaps appropriate for a £1,440 graphics card - it's certainly a unique look too. The use of real carbon for the backplate is a really nice touch, meanwhile, and keeps the card feeling sturdy. The NVLink connector, however, is left exposed other than the plastic protective cover the card is packaged with; a little carbon cover the match the backplate would have been nifty.

As you can see in the header image, RGB LEDs are built into the two edge fans but not the central one – an add choice. More RGB lighting is found along the top edge and on the backplate, and as usual you can use MSI’s Dragon Centre software to customise it all with a variety of settings. Doing so in a way that doesn’t clash with the gold, however, might prove tricky. The top edge also has a little monochrome OLED display which can be set to output custom animations – now MSI is just asking for trouble.

A boost clock of 1,770MHz is almost 15 percent higher than the GPU’s reference specification (1,545MHz) and puts the Lightning Z in amongst the highest-clocked cards on the market. Zotac has one at 1,815MHz, but there aren’t many reaching these heights. That said, having a high clock set in BIOS and being able to maintain high clocks under load are two different things, so we’ll look at that later. The 11GB of GDDR6 sadly has no overclock and is left at 14Gbps. 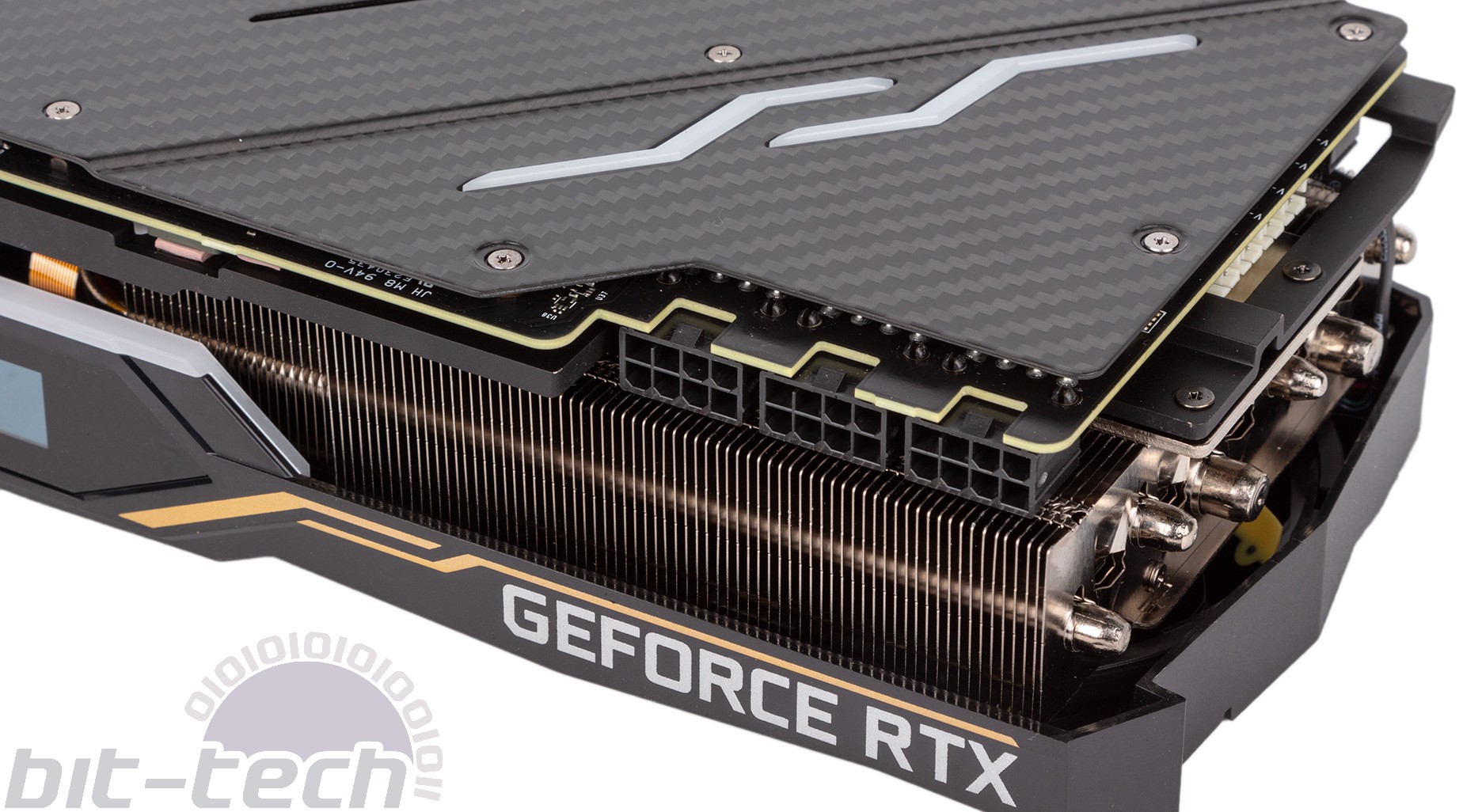 We know from our own efforts that Turing GPUs tend to chew through power when pushing clocks higher, and that seems like it’s going to be the case here. MSI says it can consume 350W out of the box and outfits it with a whopping three eight-pin PCIe connectors. Coupled with the PCIe slot, that’s a maximum wattage of 525W – way above 350W, but the headroom makes sense given the target audience of extreme overclockers that often like to perform hardware-level modifications to bypass the power/voltage limits.

To that end, the card has a dual-BIOS switch, with one side marked as ‘Original’ and the other as ‘LN2’ i.e. liquid nitrogen. In LN2 mode, the card is said to have no power limitations, with MSI claiming there’s actually no need to perform mods to unlock full power. We don’t have the facilities or bravery to test this out, so we’ll leave that to the pro overclocking scene. The clock speeds in LN2 default to reference, which we guess is fine since they’re going to be tweaked anyway, but something that’s very odd is that the semi-passive capabilities of the fans (known as Zero Frozr in MSI parlance) only kick in when using LN2 mode. This implementation of Zero Frozr should be called Zero Sensr, because anyone using LN2 will have removed the cooler/fans anyway. We have requested an explanation but so far we’ve not heard back.

MSI is using reference display outputs on this card: three DisplayPort 1.4, one HDMI 2.0b, and one USB-C connector with VirtualLink support.

Three large Torx 3.0 fans supply airflow. These are MSI’s latest and greatest GPU fans said to generate 15 percent more air pressure at equivalent noise levels than the previous generation. They have double ball bearings in the motors and an alternating blade design with one blade optimised for accelerating airflow and the other for driving it downwards.

The heatsink is one of the biggest we’ve ever seen. A large copper baseplate feeds eight separate copper heat pipes, which then weave their way through two separate aluminium fin stacks. The copper is all nickel-plated to give it a pleasant silver sheen, and MSI uses fins with different heights supposedly to optimise airflow through them. A discrete close-quarters contact plate is also used to directly draw heat away from crucial VRM components, and impressively both this and the carbon backplate have integrated flat heat pipes. It really would be difficult to ask MSI for anything more from the cooling solution, though we do feel a card like this is always going to be better served by water-cooling. On that note, there is so far no official word from MSI or other third parties about water blocks appearing for this card.

The giant PCB plays host to a whopping 19 power phases, all controlled digitally for maximum accuracy. 16 serve the GPU (three more than Founders) and three serve the memory (same as Founders). Whereas most cards only offer a modicum of voltage control (i.e. only for the GPU cores), this one has separate controls for the GPU, memory, PCIe (PLL or PEXVDD), and 1V8 (1.8V) – or rather it will have these controls, because at the time of testing this functionality doesn’t work even in the latest 'Beta 10' version of MSI Afterburner.

On a related note, you’ll find voltage check points built into the PCB for each of these voltages, with four V check-point cables also supplied for taking advantage of these. 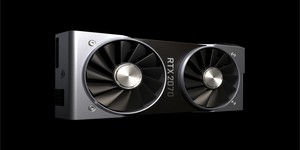 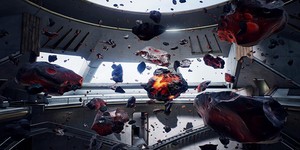 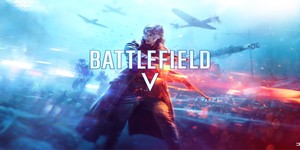