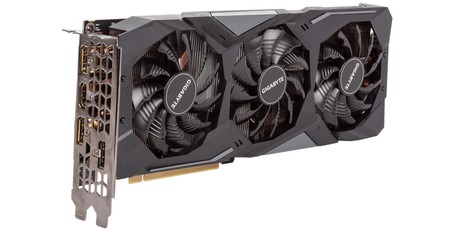 Most readers will by now be familiar with the RTX 2060’s capabilities; we’ve reviewed five of them already so far. Capable of handling itself exceptionally well at 1080p and 1440p, the GPU also has the benefit of being the cheapest means of getting in on ray-tracing and DLSS.

At £380, this unit from Gigabyte sits towards the upper end of RTX 2060 pricing and is £50 dearer than the Founders Edition. It’s also the highest-tier, non-Aorus RTX 2060 that Gigabyte has in its roster. Even then, Gigabyte has four different product listings on its website for cards with this cooler: one in white, Pro Rev 1.0, Pro Rev 2.0, and a non-Pro one. A comparison of these yields little info as to the differences, but for what it’s worth the card we’re reviewing is the RTX 2060 Gaming OC Pro Rev 1.0. The non-Pro one is discontinued (some stock might still be around), while Rev 2.0 cards share the same product number and are more likely to be in stock at retailers. The differences on Rev 2.0 compared to the card we have relate to the third DisplayPort (more info below), but we do not expect there to be any tangible performance or feature differences between the two. 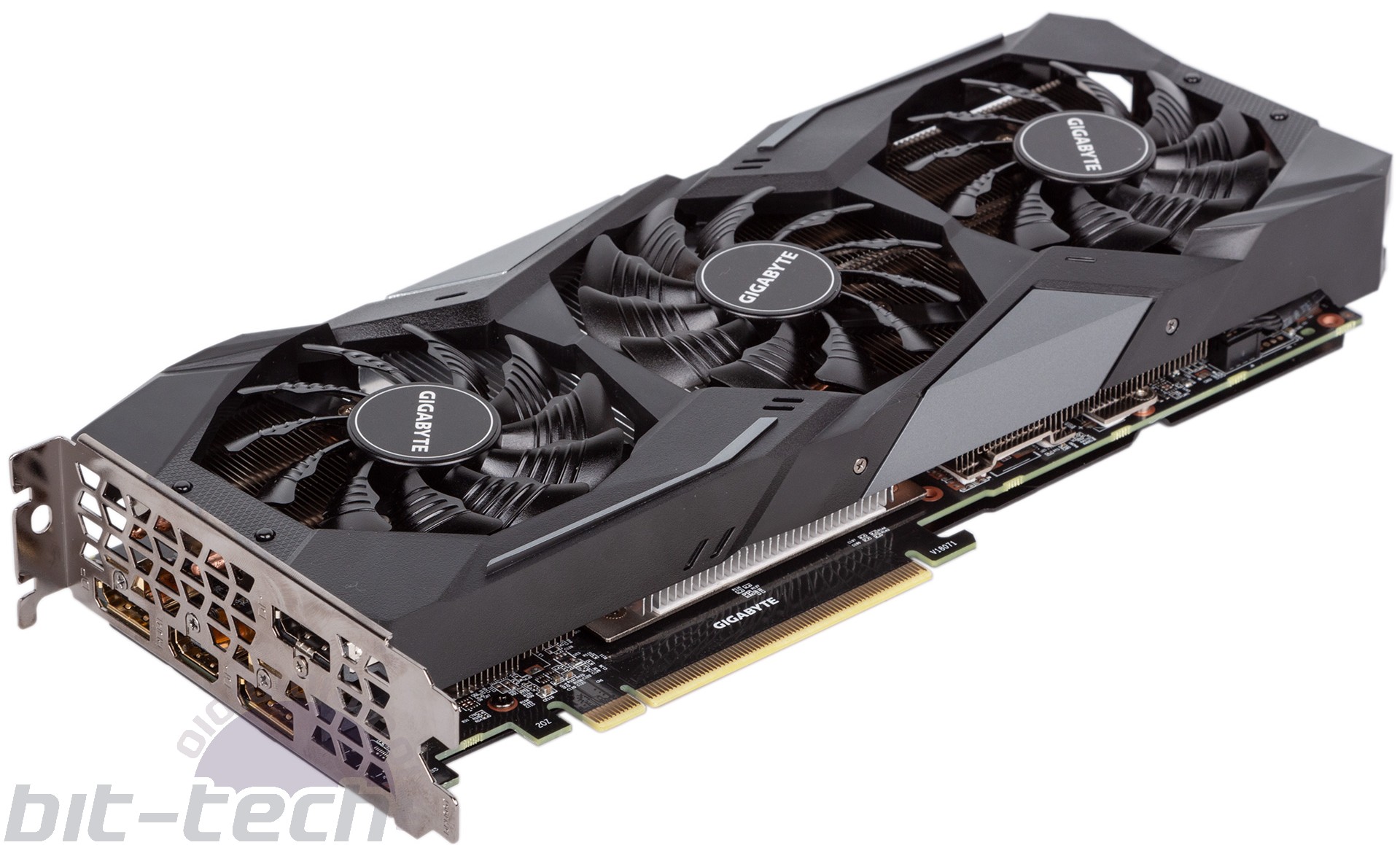 With a length of 280mm, most cases will accommodate this card, but the odd small form factor chassis might not. It fits a dual-slot form factor and is barely taller than the PCI bracket, so narrower cases will be safe too.

Black and grey dominate the aesthetics just as they do on so many products nowadays. Tone neutrality makes sense in the RGB era, and to that end the Gigabyte logo on the top edge is RGB-illuminated. Not a lot by today’s standards, but whether that’s a good thing or not is up to you. The LEDs will work with Gigabyte’s RGB Fusion 2.0 software, and users are advised to use the very latest version available due to serious security problems with earlier Gigabyte software. 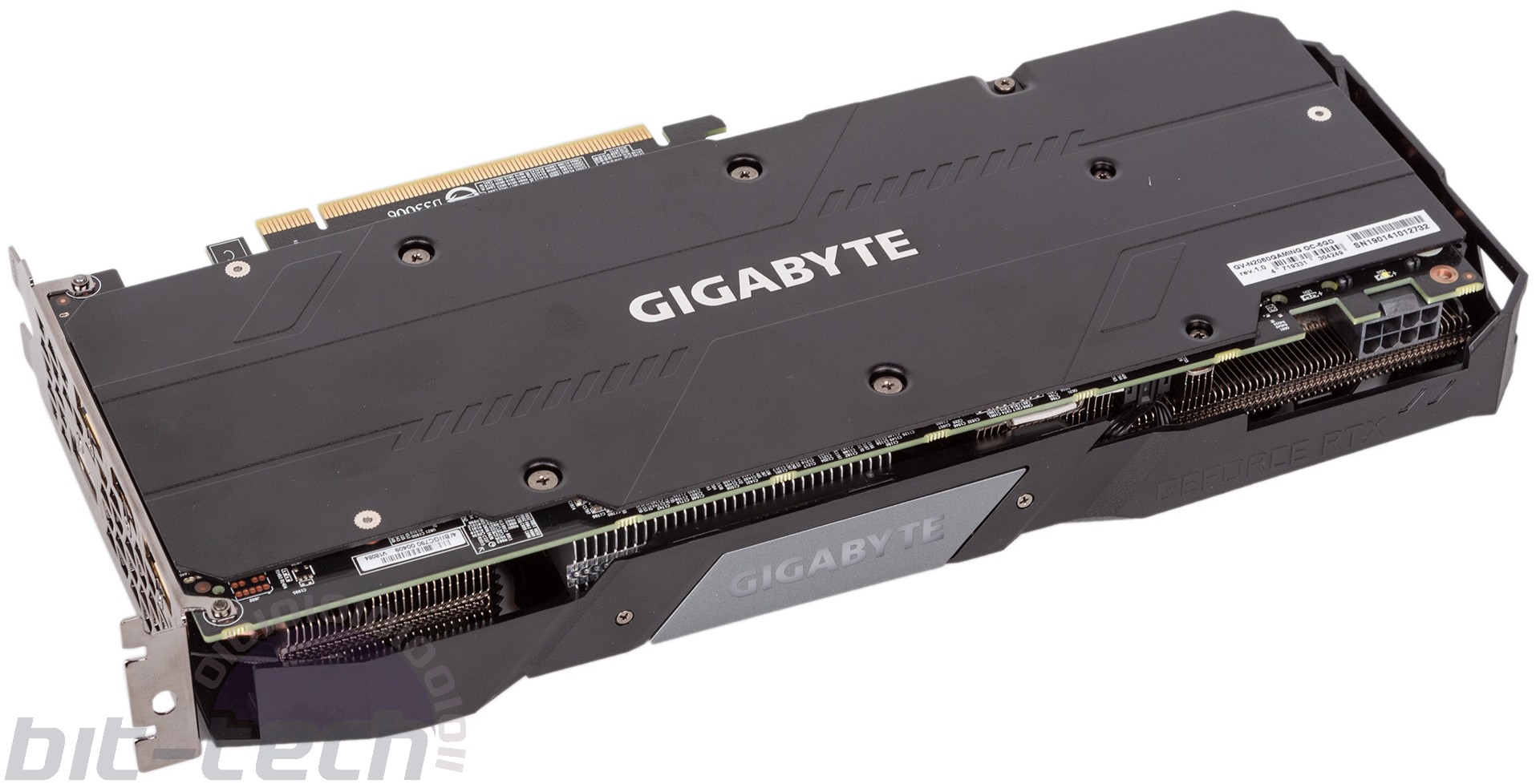 Build quality of the plastic shroud could be a bit higher, but Gigabyte’s inclusion of a metal backplate is great for both aesthetics and rigidity. It’s also a functional backplate, as it’s directly tethered to the rear of the PCB via thermal pads, ensuring that it will pull its weight and help a little with cooling.

A boost clock of 1,830MHz is impressive in being 150MHz higher than reference, but many partners offer similar speeds. It’s also the norm, sadly, for the 6GB of GDDR6 to be kept at stock speeds i.e. 14Gbps. There is no secondary BIOS on this card.

The card’s TDP isn’t listed, but based on others using a 1,830MHz boost clock we expect it to be 190W i.e. 30W higher than stock, and GPU-Z’s built-in power monitoring suggests this is accurate. This will be easily handled by the single eight-pin PCIe power plug found in the usual spot along the top edge. A white LED will flash if abnormal power is detected, potentially helping to troubleshoot in case of errors or crashes.

Triple DisplayPort 1.4 outputs are joined by on HDMI 2.0b, which differs from the Founders Edition in not offering DVI or USB Type-C VirtualLink. The latter is no big loss given how new a standard it is, but those with older monitors might lament the missing DVI even if Gigabyte’s chosen configuration is adopted by most other partners too. On our Rev 1.0 card, the third DisplayPort is installed on a different row, but on Rev 2.0 cards it joins the other outputs along the same row and also gets the same gold-plating treatment. This sees the PCB also get a minor tweak, but nothing that will affect performance compared to the card we’re testing here. As usual G-Sync or VESA Adaptive Sync (AKA FreeSync) will need to be used with a DisplayPort connector.

Gigabyte uses what it terms WindForce 3X cooling, a reference to the triple-fan setup. The 80mm fans sport 11 blades, each with grooves on that supposedly benefit airflow. Keen-eyed readers will note the middle fan being installed to spin in the opposite direction, a tactic Gigabyte claims reduces turbulence. The open shroud will see most airflow exhausted out of the top into your case and out of the bottom against your motherboard, which is the norm these days. 3D Active Fan is simply a term for fans that are semi-passive, and indeed the ones here will switch off entirely when the GPU is cool enough i.e. idle or low-load.

Seven screws allow you to remove the cooler entirely. Four copper heat pipes are squished together as two pairs, making direct contact with the GPU through a thin layer of paste. There are actually three distinct fin stacks, and not too much volume is wasted within the shroud. Contact plates are soldered to the heatsink fins and via thermal pads are used to directly cool the memory modules and the full array of chokes, capacitors, and MOSFETs on the main core and memory VRMs – good job, Gigabyte. There is extra padding even where memory modules/VRM spots on the PCB are empty, so the cooler has clearly been carried over from RTX 2070 designs, meaning it should be a little overpowered for this 190W card. 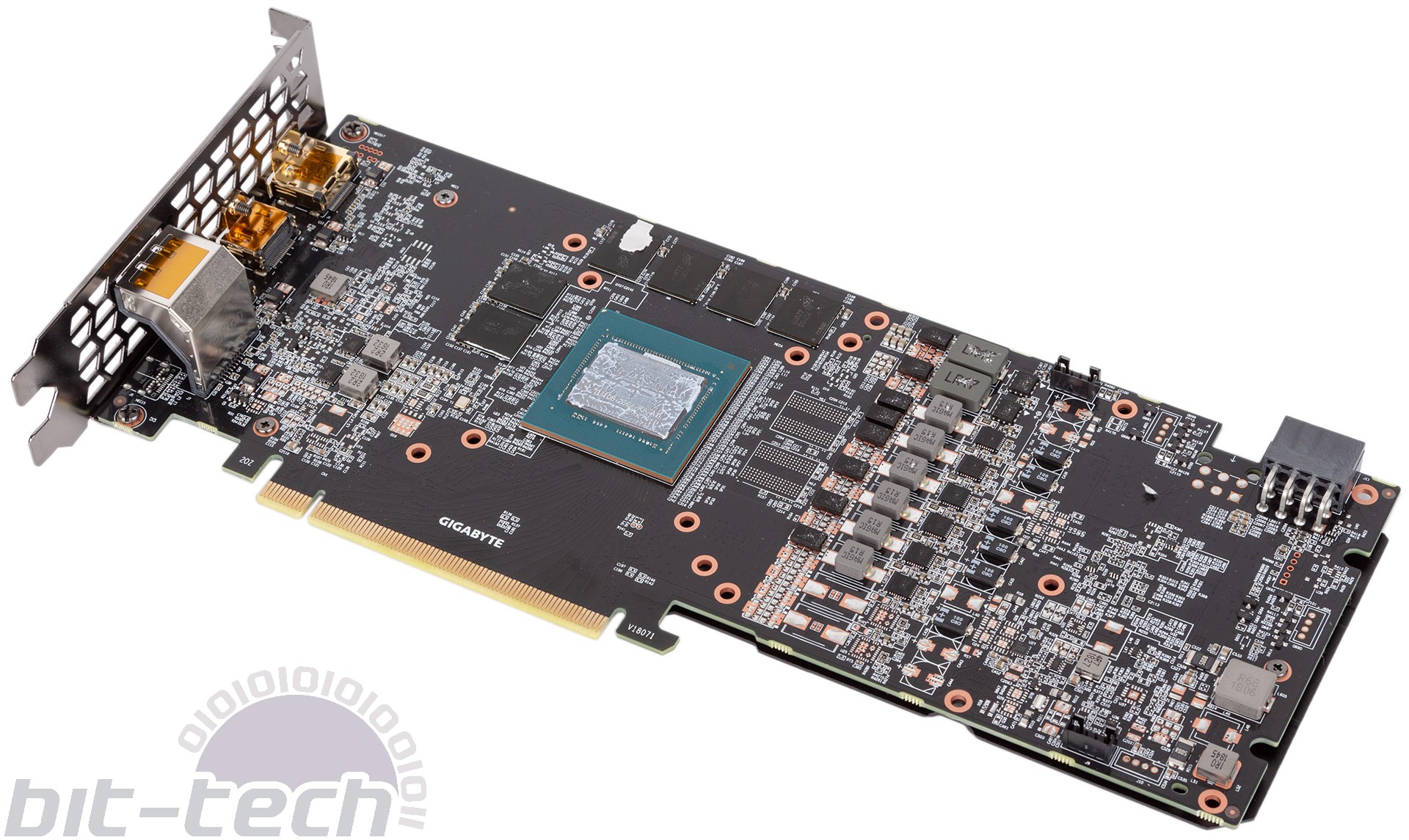 Gigabyte is using a 6+2 phase setup, which works for us and is the same as the FE. Chokes and capacitors here pass Gigabyte’s ‘Ultra Durable’ certification, and it’s using a binned ‘-A’ variant GPU as per Nvidia’s rules regarding pre-overclocked RTX cards.

Pleasingly the card comes with a three-year warranty, trumping the standard two-year one found on lesser models. 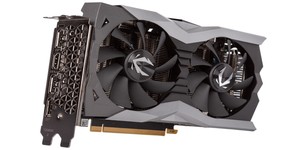