We've already covered the vast majority of Gigabyte's EFI and software, which you can read about in our review of the Gigabyte Aorus Z270X-Gaming 7. There are one or two exceptions, though, such as fewer/different overclocking options in EasyTune and in the EFI, but apart from this, the features are practically identical.

We used AMD's Ryzen Master software to overclock our Ryzen 7 1700, and it was immediately obvious that the Aorus AX370-Gaming 5 is much more polished than the Crosshair VI Hero. We didn't need to touch the CMOS clear switch once and the board never failed to boot properly - something the Crosshair was very prone to doing for no apparent reason a lot of the time. We even tried the newer 0902 BIOS for the Crosshair but this didn't solve much. In fact, we were then unable to boot stably with the memory at our usual 2933MHz. The Aorus AX370-Gaming 5 was a pleasure by comparison.

We've tweaked our overclocking methodology with Ryzen, too. With Intel, things are much more mature, but with Ryzen, getting to a CPU's maximum has been a bit of a pain, especially with the Crosshair VI Hero. As a result, we've dialled back from AMD's overclocking-recommended 1.45V, which it says is likely too high for a 24/7 overclock, to 1.425V, which is tameable by a good air cooler. Once this voltage is set, we simply increase the CPU multiplier to find the maximum stable overclock. The Crosshair VI Hero managed 4.05GHz with a Vcore of 1.425V, while the Aorus AX370-Gaming 5 could only get to 4.025GHz - still a decent effort and well worth doing considering the CPU's base frequency is just 3.0GHz.

We'll start with the audio as we initially had some issues with low results. We eventually found this was due to the smart headphone amp option being disabled in the Realtek software - enabling it saw results much more akin to Realtek ALC1220 performance in Rightmark Audio Analyzer we've seen elsewhere. However, Asus still had a small edge with its Crosshair VI Hero, despite the fact that the Gigabyte Aorus AX370-Gaming 5 already beat every Realtek-based Z170 board we tested over the last year or two. Click to enlarge
The Gigabyte board did have a lead at stock speed in a number of tests we'd normally expect to be fairly even between boards. It was a few seconds quicker in the PCMark 8 Photo Editing and HandBrake Video Transcoding tests, for example, and shaved a sizable 11 seconds off the rendering time in Terragen 4 too and was a little faster in Cinebench. However, once overclocked, the tables were mostly turned in the Crosshair VI Hero's favour thanks to its marginally higher overclock, while there wasn't much in it in the game tests, anyway.

The storage results again only showed small differences with the Gigabyte board being marginally ahead in the M.2 speeds. The Crosshair VI Hero had a slightly higher stock idle power consumption but the rest of the power figures were within spitting distance of each other at stock and overclocked.

Despite some slightly slower performance figures and marginally lower overclock, the Aorus AX370-Gaming 5 is a far more stable board to work with than the Asus Crosshair VI Hero. It recovered from overzealous overclocks with no need to reset the BIOS - something we had to do dozens of times with the Asus board with the exact same hardware, there were none of the random failed boots that we encountered at stock speed and when overclocked, many of which we just put down to teething issues. It seems that Asus has some work to do.

Indeed, these issues were so bad that we initially had our reservations over whether we'd consider a Ryzen PC for ourselves at all or stick with Intel. While Asus will no doubt sort things eventually, the Aorus AX370-Gaming 5 is ready and stable now, although we still couldn't get our memory above 3000MHz. Apart from this it's certainly good enough for us to use one in our own system.

Apart from the stability issues, the Crosshair VI Hero is otherwise a fantastic board, but stability is absolutely essential for a motherboard - all other features, bells and whistles are secondary. As a result, along with some solid benchmark numbers and most of the features you need to build an awesome Ryzen system, the Gigabyte Aorus AX370-Gaming 5 is currently our firm recommendation for an AM4 motherboard at around £200. 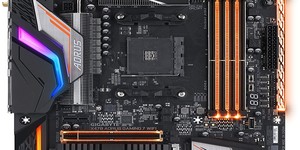